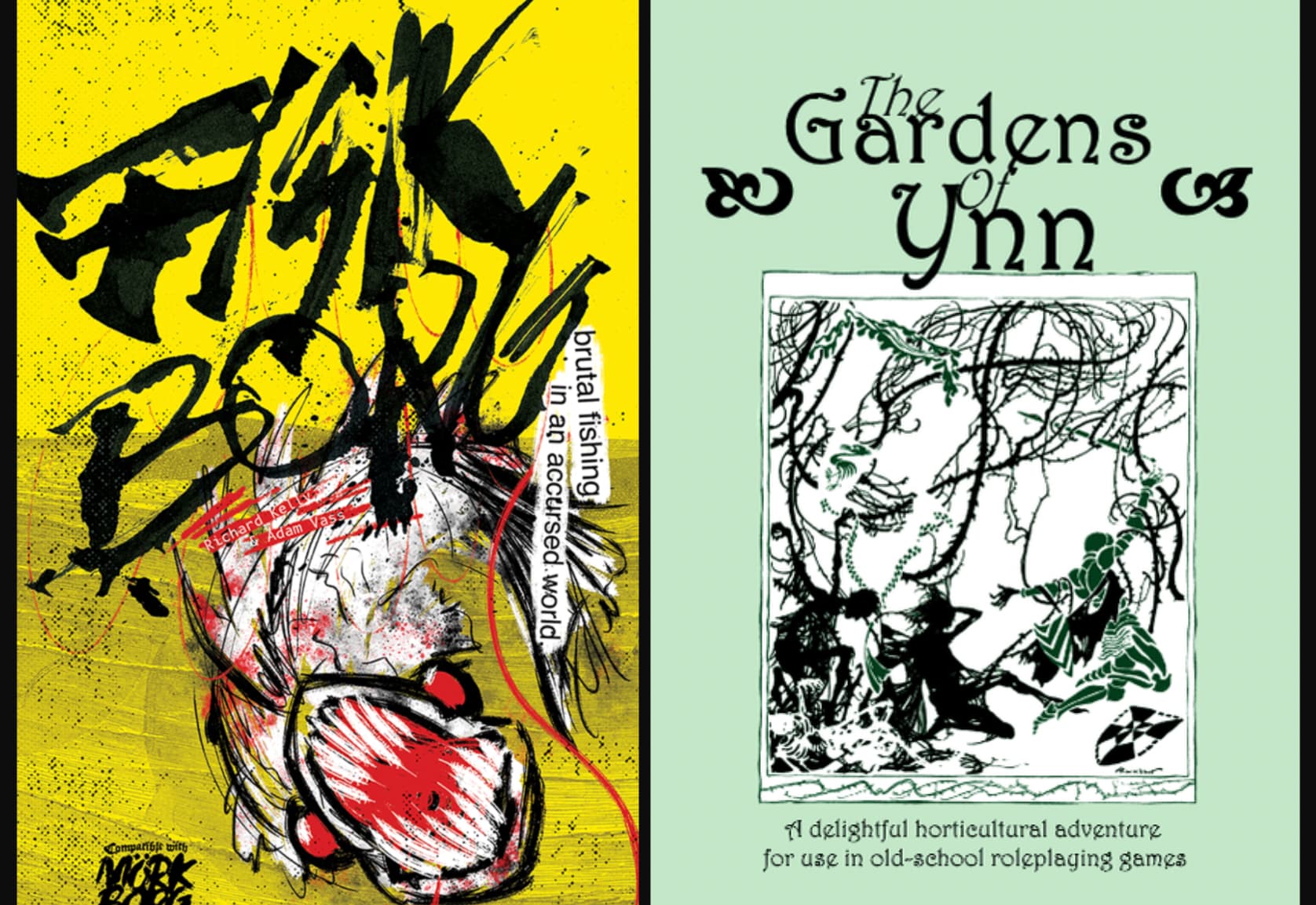 I’ve gotten a huge kick out of supporting Fisk Borg – the amazing, hilarious fishing supplement for Mork Borg. It helps me imagine a version of that game that has quiet moments (in between the insanity), and it makes me wonder:

I think that you could probably port the dark world shown in Mork Borg into a more campy setting and use that. You could turn it into something closer in tone to Army of Darkness, where there are horrible things around, but it’s all a bit goofy and played for comedy from the perspective of the players.

Regarding the Gardens of Ynn, I’ve run it before (adapted for a Sci-Fi campaign) and I really think that it works well. It takes a good bit of improv to run it as written, although you could also use the book to make a pre-written environment with a bit of adaptation.
I’d also recommend converting the monsters over to Mork Borg’s system or getting familiar enough with the technique to convert them on demand. I haven’t run Mork Borg, but I can’t imagine it’s too difficult to convert from Ynn’s B/X-like monster stat blocks to Mork Borg’s.

Summary of my suggestions from the server:

Very cool! Much appreciated, re: Gardens of Ynn. I’ve run Stygian Library, so it’s cool to hear your experience is similar with this module! It’s a balance of improvisation and being familiar with your tools (like a plan for converting monsters, generating stats or “reskinning” them on the fly).

In my head, the theme song of this MB community sounds like the intro of Trailer Park Boys, except with images of the Apocalypse, in sepia tone.

How would you shine some light into that world? That is, mixing in other moods besides grimdark, but without destroying suspension of disbelief in the main setting?

One option is taking the idea of “cleansing apocalypse”, much like Ragnarok. The world is going to inevitably end soon, but will be reborn into something better. The PCs can be attempting to secure their place in the new world.

I keep thinking about Adventure Time; the world seemingly has some dark and scary things going on, but that’s not what the main characters tend to interact with. For MB, just don’t tell the players about the apocalypse, don’t show them the art or the gothic fonts, and describe something a bit more idyllic. Just make sure you get buy-in from your players first. “This is a world where dark and scary things are happening SOMEWHERE, but you are separated from it by virtue of who you are, or where you live. Sometimes scary things will skitter across your path like a cockroach, but you aren’t going to end up in a cave full of cockroaches unless you deliberately set out to do so.”

In my head, here’s the current iteration of this idea:

Characters from Mork Borg world discover a hidden entrance to the Gardens of Ynn . They have to wear special suits because the gardens have an allergic reaction to their corruption. It becomes an underground industry because artifacts from The Garden provide the only source of fresh “joy” that they can smuggle back to The Apocalypse. The Lady of Pain, or whatever her name is, has agents sent out to uncover this “black market of joy” so she can drain the joy-essence from the portal directly (which would bring The Apocalypse *to the Gardens, something its denizens will fight to stop, with or without the players.)

I definitely, definitely appreciate all this input! It’s giving me great inspiration.

I think that’s pretty insightful. Adventure Time is a bit darker than it seems on the surface. The art style in Incandescent Grottoes reminds me of that show a lot. Are you familiar with that adventure? It *looks kinda happy on the surface … but there’s some fairly hardcore stuff in that dungeon, at least vs. a party of low-level PCs!

I hadn’t heard of The Incandescent Grottoes until now but it looks neat. I’ll check it out!

Love adventure time as an example, it really does a good job at things, the dark are things that are very present and even interacted with to the point that there’s no question of their existence but they aren’t so heavily layed down as you said.

One thing that I think could be really impactful is to remove the element of humans and intelligences and focus on the terrain in a meaningful way. Blame! you could describe as grimdark in many ways however there is also that sort of loneliness that persists.

The world is dying in Mork Borg, and who is mourning for it? Is it the players? Why should they mourn?

Or do they feel relieved about the idea of building anew because the went over to Gardens of Ynn and know that maybe it doesn’t have to be so terrible. They could mourn those lost?

Update: I started this Mörk Borg campaign with a written pitch that mentioned Zelda: Breath of the Wild. Turns out that was enough to establish the balanced tone I was seeking.

I’m very loosely using Bone Marshes as their starter adventure, and improvising some concepts from Perilous Wilds to flesh out the margins. I quite like this mix – feels like the movie Apocalypse Now, a bit of slow-moving beauty, but with an implied hellscape always on the horizon.
They are halfway through this first adventure (…3 PC deaths in the first session alone! … with rapid respawn). Next: I will be taking them to the Halls of the Blood King. Which should be very, very cool!