My go-to for anything longer than a few sessions is Whitehack (the third edition) - it’s basically got everything I want and very little I don’t! For short games or one shots I use a few systems, depending on what feels right, but it’s notmall The Black Hack, Knave or ItO/EB - they’re just so quick to get up and running. I especially like that all the generators in the black hack book can get you from a bunch of bored people with nothing to do to a bunch of roustabouts on an adventure with minimal prep and input.

I’ve also got an ongoing Mothership game running so I suppose that counts! I’ve kind of houseruled it I to oblivion though, so I’m not sure what it is anymore! I’m looking forward to the proper first edition release - I think I’ll go back to playing RAW after that and see if it works better for me than the current pamphlet/beta rules. Sweet game though.

Same for me in mothership! I think I’ve tinkered with every single rule already lol. Also can’t wait for 1e, I’ve heard it’s gonna be awesome! (and it will most likely implement a lot of house rules popular in the community)

Nothing OSR nor NSR, I would come out with Risus The Anything RPG 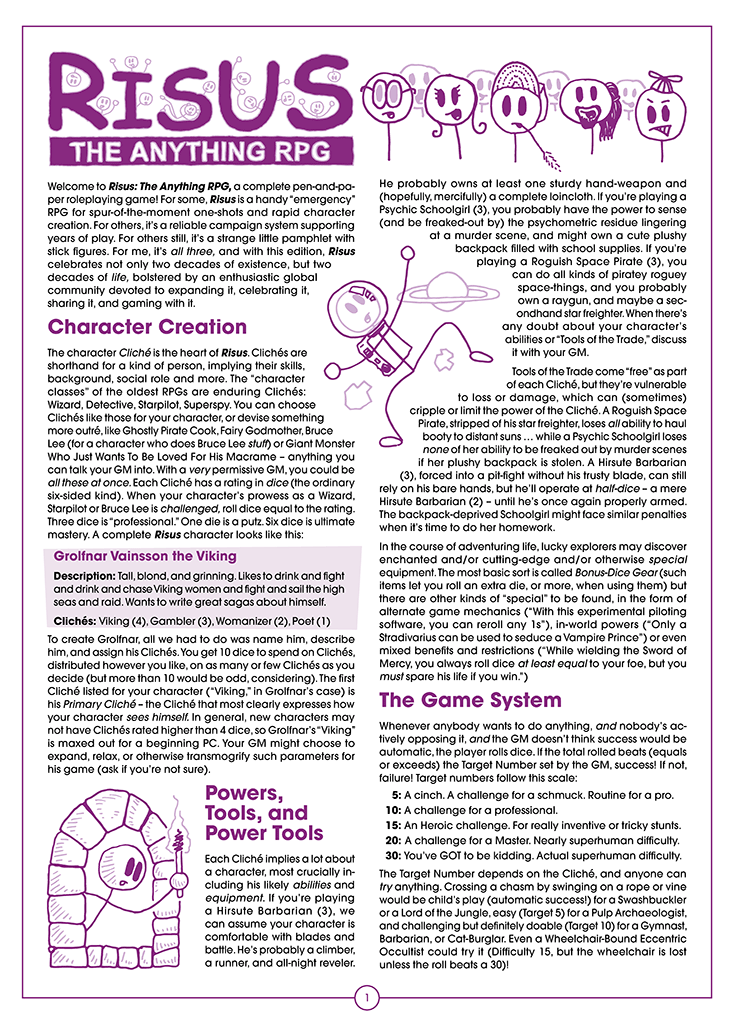 For some, Risus is a handy “emergency” RPG for spur-of-the-moment one-shots and rapid character creation. For othe

On the same line of crunchiness two of my favorites are: 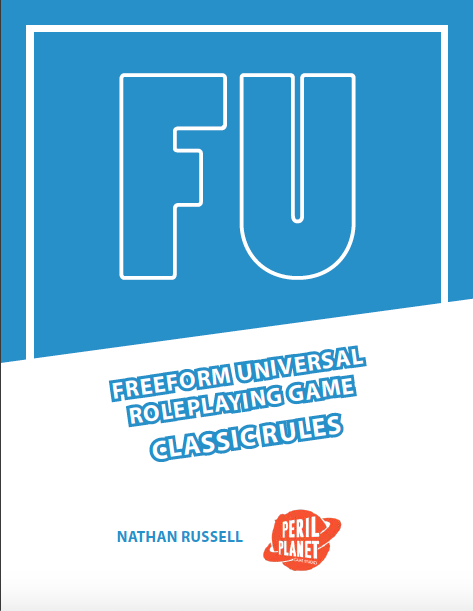 FU: The Freeform Universal RPG FU is a game of action, adventure and fun! It is a roleplaying game of grand proportions

I bought it and keep in the archive for the future, when my daughter will be old enough to role-play.

Without a doubt Original Dungeon & Dragons.

Totally relatable, my favorite iteration is White Box FMAG. But not on my “pick-up & play” page I am afraid. Still totally rocks tough and one of my favorite games overall.

Nowadays I just mostly FKR it. Grab 2d6, decide a target number based on characters abilities and let’s see what happens.

I would die to try this approach which fascinates me, but I can’t find like-minded players to try

My go-to games are probably ItO/EB and Maze Rats. Both are so simple yet offer so much for you to work with. Great for new players, great for veterans. Always a blast using them.

It is been a while since I had a go to game. I am always more interested in trying out new things then sticking with one. Mostly because our group likes to play a lot of different genres. The one I would still instinctively grab is Barbarians of Lemuria because I can run anything I like with it, from fantasy to sci fi. As long as its heroic in some way. But I also have 24XX and FU on my shortlist of games to grab and run.

I was gonna say either RISUS or Roll 4 Shoes as well. For quick little one-shots these are really good and flexible.

Risus has always seemed pretty cool, I should really check it out sometime!

Wow, this looks very much up my alley.

For a while it’s been either Cairn or Maze Rats. More recently, I’ve appreciated how nicely Knave plays with a bunch of Things on my shelf.

Nowadays I just mostly FKR it. Grab 2d6, decide a target number based on characters abilities and let’s see what happens.

I would die to try this approach which fascinates me, but I can’t find like-minded players to try

The good news is, that if you’re running Risus and FU, you’re basically 90% there

After all, my approach is is not that different from deciding on difficulty in Risus, and I am pretty much using cliches to describe characters, just don’t assign them numbers - so just like FU. If you want to push it to 95%, you can try something like OK RPG!, which is still a system that your group can reference, but is much closer to pure FKR.

If your players like that game, they would probably enjoy “systemless” play. I know that many players are weary of that kind of play due to the myth of GM’s fiat, but maybe if you can show them that you are already pretty much playing this way, they would be willing to give it a spin

Worse comes to worse, you can play some games solo (if that’s your thing) to give this approach a try

If I just need to run something right now, chances are it’s either going to be Barbarians of Lemuria or Old School Essentials with a couple of my favorite supplements.

If it’s an idea for a game that I don’t otherwise know exactly what system it needs to be-- chances are, it’s going to end up either in Cortex or some flavor of d00 Lite.

Very nice and neat ruleset, very close to Loner (which has fixed tag slot, though) and GIST! FKR (which has six attributes, keep the relevant ones). I like to play with rules, what I am missing are players to test them

Happy to have a group to play Traveller with, though. At least I can play one of my favorite system.
I tried to propose a one-shot session with FU RPG but was skipped. Maybe one day…

My pick-up-and-play OSR games are OD&D 1974 (the 3 LLB), Cairn, Into the Odd, and Old School Essentials. Basically, whatever Ruleset I’m comfortable with to improvise a night’s session. 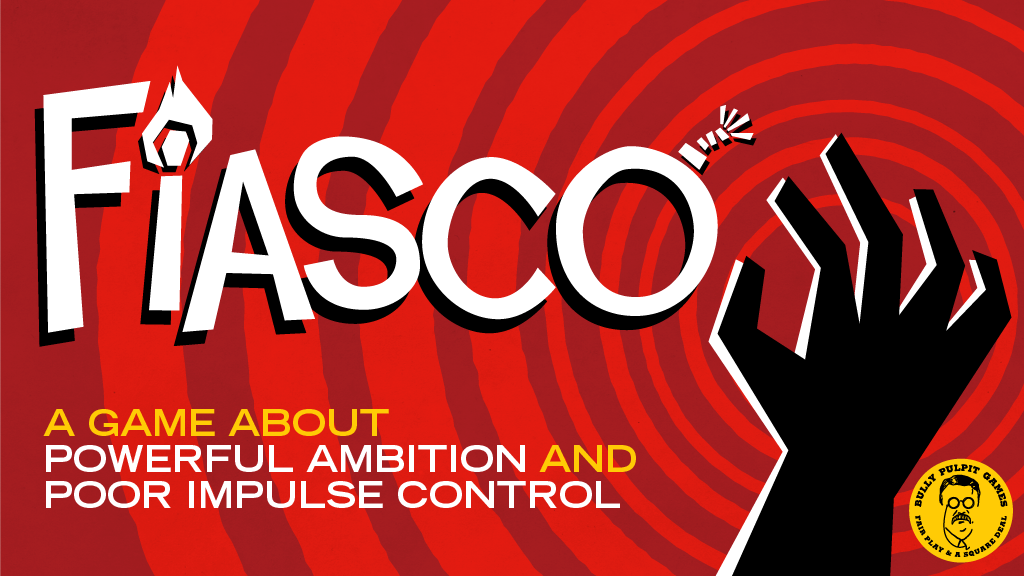 Where Can I Find Fiasco? Fiasco is available at a game store near you! Check out this list of great stores or order it from our partners at Atomic Empire using the links below. Fiasco (Boxed Set) F…

Yo @LordPersi, I’ve seen Fiasco around but I’m not really sure what it is. Care to explain?

Hey, glad to see you here as well!

Fiasco is a story game to simulate any story where the protagonists end to fuck up everything; for instance, Pulp Fiction, Fargo or The Hangover.

It’s nice when you need something fast and there are folks who don’t play neither OSR nor tradition nor any RPGs in general. Easy to explain and to pick up.

Yeah, I’ve also played the new card edition and it’s great! Really recommend for new players. They also have a lot of themed sets if you wanna go for non small town crime type of stories.

Totally relatable, my favorite iteration is White Box FMAG. But not on my “pick-up & play” page I am afraid. Still totally rocks tough and one of my favorite games overall.

White Box: FMAG is probably my favorite “take” on OD&D outside of my own, so whenever I run in a scenario where I have to hand out books and let players know they can buy it, I’ll reach for that. Either that or Untold Adventures.

Untold Adventures is a great streamlined version of WB. I totally love the dual-classe thing and the simplified inventory system

Honey Heist!!! Whenever I get to play a game with people that are new to roleplaying, this is what I choose. I’ve met quite a few people that aren’t into fantasy at all, but everyone loves being a bear in a top hat!
Otherwise I think Cairn or Rogueland are absolutely fantastic for quick and easy play and even fit in my jacket pocket

FATE is usually my go-to for one-shots, but otherwise I wouldn’t necessarily say I have “go-to” games. I usually run campaigns that last for ~1-2 years, usually only one at a time, with the occasional one-shot here and there, and at least so far, I have not ever really circled back.

I love Numenera / Cypher System as well as Tunnels & Trolls, and have run campaigns using both, but I don’t imagine myself going back to either of these systems directly- if I ever were, it would more likely be a hack or new game inspired by either of those systems.

Likewise, I’ve never played Into the Odd or Electric Bastionland proper, but Maximum Recursion Depth is loosely based on Into the Odd and I see myself using ItO-based hacks as a “go-to” for the foreseeable future, so I guess you could say ItO is my “go-to” game even if I’ve never played it directly and likely never will.

Sadly I no longer have the motivation to do deep dives into new systems as I used to over the past several years, but if I ever am able to deep-dive into FKR, I could potentially see that replacing ItO as my “go-to”, and for largely the same reasons.