Does anyone have insight on the early RPG origins of " Bend Bars Lift Gates ." Like is that something that Conan does, or maybe a character in a Jack Vance novel?

I’ve just been calling it Hulk Smash Door! … which may or may not reflect what people were imagining back in the 80s?

My guess is that Bend Bars Lift Gates derives directly from the “open doors” rules in early versions of D&D. Classic D&D assumes that many or most doors you encounter in a dungeon are stuck. To open them, you roll a d6, and your chances are modified by your Strength modifier.

How that relates to specific precedents in fiction, I’m not sure. I think I have a memory of Conan wrenching some bars out of the wall in one Howard story. I assume it got ported to the Fighter class in Dungeon World because in Adam Koebel’s nostalgic memories, the Fighters were usually the strong characters who successfully got doors unstuck.

Sounds totally reasonable. I realized when doing my own research, that it wasn’t always expressed using the epic-sounding description of bending bars. As you say – “forcing a stuck door” sounds more mundane and procedural, so just something that comes with the territory of exploring ruins in disrepair.
I do remember my 2nd edition GM describing this action using imagery that was a little more comic-book-ish. But that was more about our relationship with that version of AD&D, rather than anything to do with classic 1st or 0th edition D&D.

So a couple of mechanical and/or historical bits that may be worth noting.

My take is that its an example of typical Gygaxian over-mechanization. Gygax decided to quantify STR scores at 10lb per point - so the buffest PC can deadlift 180lbs … but there are buff people who lift a lot more… so Gygax needs to upgrade STR somehow to account for powerlifters. The percentile score between 18 and 19 is born. With it Bend Bars/Lift Gates. Pure Gygax argel bargel.

My first exposure to it was in the portcullis trap that shows up in B1 - In Search of The Unknown. It assigns a percentage of 5% to Strength ratings 13,14,15 and a 10% to 16. A Strength of 17 or 18 nets a whopping 15%. Each person gets one attempt and there’s the ominous line “If all attempts to escape fail, the persons trapped will be doomed to their fate.” 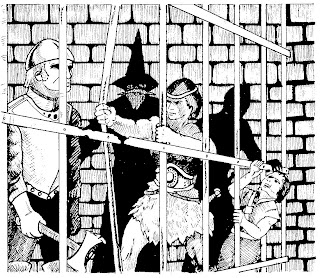 If the entire party isn’t trapped, there are provisions for raising it with a nearby lever at least

B1’s a good catch! It’s interesting that the B1 rules are both a year later then the AD&D PHB (B1 is '79, AD&D PHB '78) and while similar, less granular then Gygax’s AD&D version (also without the oddity of the percentile STR score for fighters - and the presumption it brings that the fighters in the part will have somewhat higher percentages to lift gates etc).

To me it raises some questions about the dungeon design of B1 and how it creates specific/local rules – which I think is a pretty decent way to offer novel challenges. It also highlights some of what I find questionable about AD&D design, both the way it expects higher prime requisites for PCs and the way it tends to drill down with very specific rules for edge cases while leaving other areas unexplored.

oh man, that illustration is great!