So I recently saw the forum had a collaboration category, and I wondered if we couldn’t make a borough together as a collaborative thing. So what I did is make a map, stretching the map making rules a bit to make it look slightly like the logo. Then I went on and rolled on spark tables for all of it.

What I now suggest is that whoever wants picks a number, a line colour, or the borough itself and tries to interpret it in such a way that it will all make some sense and we end up with a working borough.

I think it would be fun that each of the spark rolls can be interpreted and get three bullet points to its name in true EB fashion.

I’d say that, to give everyone a chance to participate, once you picked something to interpret, you wait a day at least before you pick the next one. 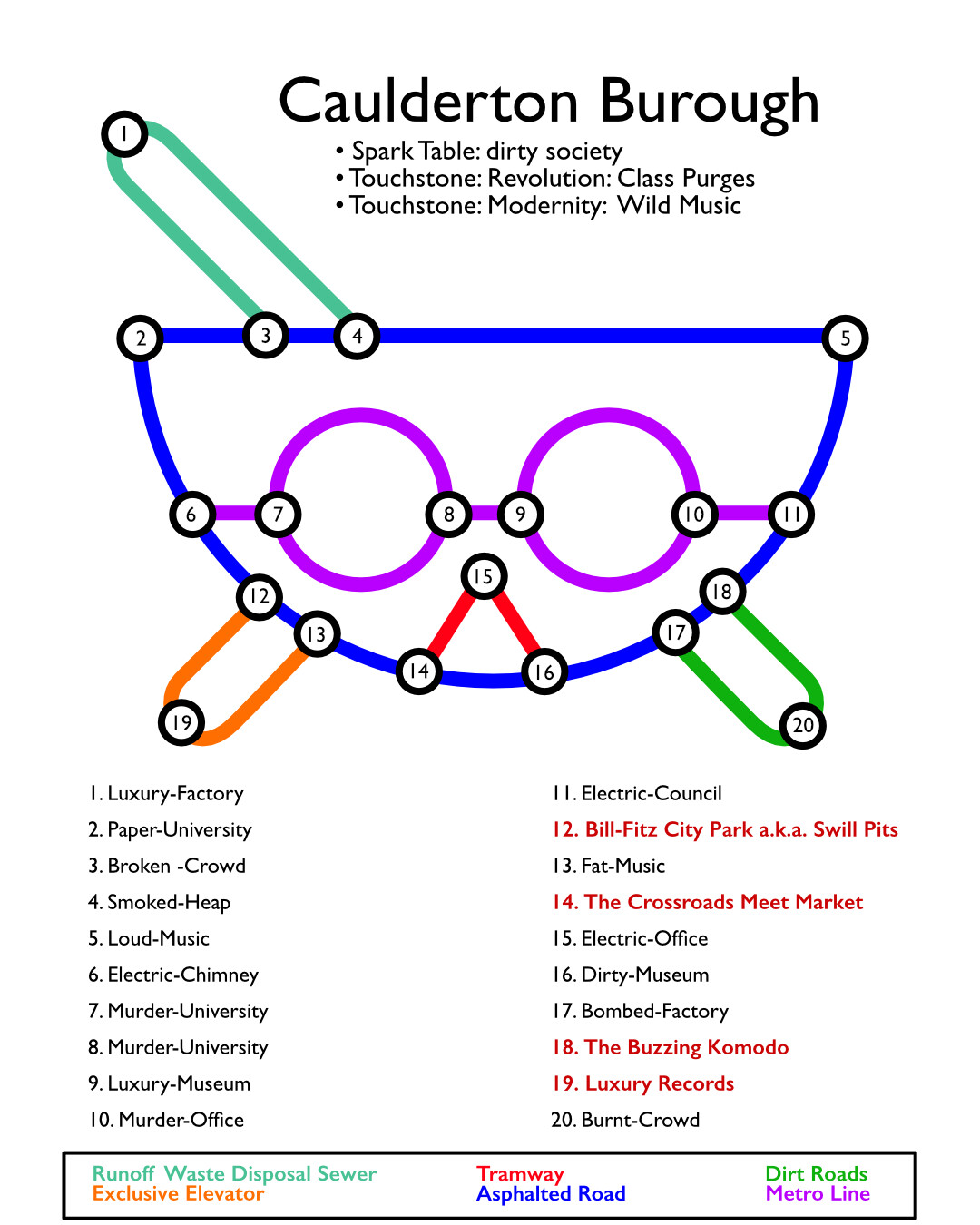 I think it’ll be hard to make this work if we don’t start from broad strokes and then fill in details, so I’ll invent some factions.

Alright. A day has past for me I think. I’ll declare some route types.

Teal just leads to a factory, so making it a run-off waste disposal sewer seems fitting. Paper Mills use a lot of water, iirc. It also provides a possible entry to the Underground.

Orange connects a bar with music of multiple types to Luxury Records, being only reachable by the orange path. Let’s say it’s a Secret Elevator setup, leading to the most prestigious record label in town.

Green leads from Bombed Factory to Burnt Crowd, which has been suggested as a sort of Woodstock Situation, and also connects with Electric Lizard. Let’s say that these are Dirt Roads.

Red leads to the Electric Office, and thus would be perfect for some kind of Tramway.

I tink Blue, connecting to most things, might work best as a regular asphalted road.

Purple, then, leading mostly to institutions, would be perfect for public transport, like a Metro Line The loops would be possible routes that could give different encounter options along the way. I’ve been thinking wether or not I should put some alternative stops in there, but I’m so happy with an accidental nice and even 20 that I’d say possible extra stops could be discovered in play.

EDIT: I should have re-read what had been posted previously. edited to take it into account.

It occurs to me that maybe a lot of people aren’t familiar with the process for creating a borough of Bastion. This video should help to clear up what it is we’re doing here: Electric Bastionland - Building a Borough - YouTube

Luxury Records (point 19). Musicians have always had a strong presence in Caulderton, and those looking to make it big hope to sign a deal with Luxury Records.

Expanding on this in three points.

• Very exclusive: Only reachable by appointment via two password protected elevators (12 & 13), one in a prestigious club (12), the other in an affiliated record store (13).

• Ran by Dirty Ricky, a Green, Fat, Mock-Swine, sitting in pool of fresh mud. Often call for more mud to be brought by servants.

• Used to be a coal mine, now repurposed by Dirty Ricky. If you get lost, you might end up in the Underground.

18. The Buzzing Komodo
A gigantic, building sized mockery of a Komodo dragon. It’s neon-blue and buzzes with static electricity. It also functions as a building. While capable of moving, it hasn’t in years. The city started building around them.

• The Mouth of the Komodo: A Music Venue. The Mockery opens their mouth wide enough to form a sort of concert hall, including seats. If the music’s good, no problem. If it’s not, the mouth closes and you get swallowed.

• The Belly of the Komodo: A secret music school. The musicians swallowed are kept here and are being trained by little neon blue Mock-Komodo’s until their music is good enough. Some are in here for years. The training ritual involves all kinds of weird and dirty stuff. Mainly as punishments. Play a wrong note, mud gets flung at you. Couldn’t keep tempo, mud showers, etc.

• The Tail of the Komodo: Once a musician has been trained to full requirements, they exit from underneath the trail, now a Dirty Musician.

An old inn and tavern. A melting pot of musicians, students, and the working class. The inn is always filled with folks that are stuck, not knowing what to do, not making a choice, and not going in any direction.

Thank you for all the additions already. I edited the map in the first post to show the progress made already. There still are many places to invent and have fun with!