I’m working on a dungeon.
From a design standpoint it started as pretty standard stuff, following all the usual principles (avoid trees/dead-ends! use elevation! make it non-linear! etc). I focused purely on the layout, and not what would go inside. In the end, I had this (room spoilers removed): 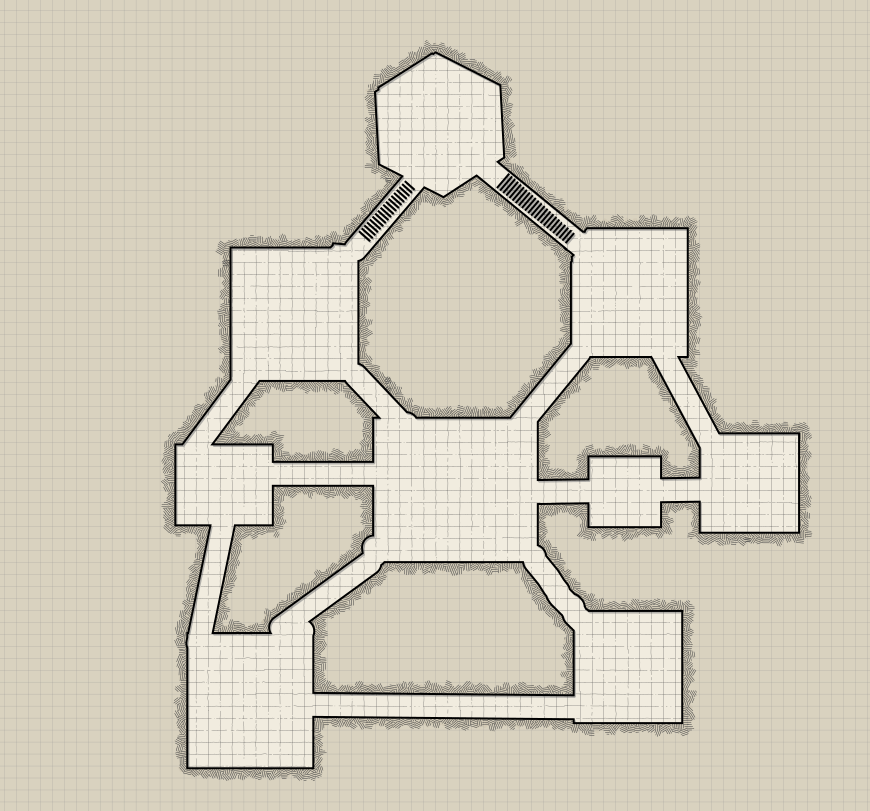 But something still felt off about it. Thematically it had very little to do with the overall setting (Jewish Folk Horror, intolerance, mysticism) and although I enjoyed stuffing it with monsters/items/traps/puzzles, it still felt kind of bland to me.

I put it aside, and instead started designing a dungeon in the reverse: I created 10 rooms with no real relation to one another outside of theme, and then found a design to match. Each room matched one of the 10 emanations (or Sefirot), and in the end I had a dungeon that looked like this: 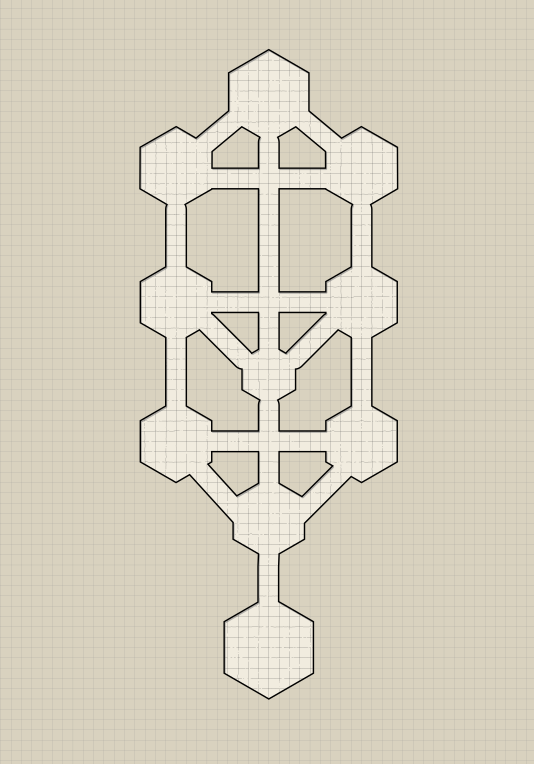 Now I have rooms/design based around a central theme that also fits nicely into the overall adventure.

Does it make a good dungeon? I would really like to start playtesting this, but I’m afraid that perhaps I’ve gone a bit overboard with my thematic emphasis, and ignored what really matters: playability.

So I ask you all: how do I make sure this doesn’t suck? I’ve run it through a series of questions derived from the likes of Questing Beast, Goblin Punch, Emmy Allen and more, but I think I might be lying to myself. I don’t want to wait until the entire adventure is written + laid out before realizing that duh, this is a crappy dungeon!

Any thoughts are worth their weight in Kopeks.

I think this layout is interesting. Will the hub be blocked off initially or require doing things in the rooms on the periphery? I think the room sizes are fine. Adding secret rooms could be cool. Where are the doors? Are some of them locked? Where are the entrances?

Kabbalah dungeon! Hmm, I think as far as maps go (not being able to see the keying for what’s in the rooms) its pretty good, but could probably be improved if you added in some obstacles and stuff in the connectors? Like maybe one is blocked off by rubble, locked doors, a door is secret, etc… that could make the space a bit moree dynamic to navigate since as it stands there’s no ‘routes’ really given that the whole place is interconnected?

Agree with Cosmic. Is the center little room a switch room? Does it open shut or trigger things?

Yes, the connectors or blocked but some can be removed. There is also water going from rooms through the connectors and using logic one can take shortcuts or create advantages for themselves.

In my experience you have to start with theming and lean into it hard when you’re writing/keying. Making concessions to playability is easy to do after issues pop up in playtesting, but it’s way harder to find the spark of thematic inspiration once things are already locked down. I think you’re coming at this from the right direction!

Or perhaps is the main room for some group controlling the dungeon? They would have the easiest access to the most locations…

I would also mention Dungeons & Dilemmas by Jesse Burneko here… It has some interesting thoughts on structure as related to theme and the application of Graph Theory to figure that stuff out.

I finally picked this up and am gonna check it out

I would also mention Dungeons & Dilemmas by Jesse Burneko

Yes, this book influenced much of the adventure!

Looking at the layout and thinking about a dungeon that allows you to switch around which rooms can be accessible, reminds me a bit of the Birk titan/dungeon in Silent Titans. In Birk, there is a central computer that you have to use to change a limited set of connections to navigate the dungeon. Might be worth a look…

On a different note, looking at the image of the emanations and noticing that beauty is the emanation that sits at the central hub, it struck me that that is a very interesting theme for a central room, esp if it has some kind of control over the dungeon. Do you have to arrange the dungeon to be more beautiful? Does the dungeon have its own notion of beauty and composition? Are you the dungeon artist? Anyway, just some associations that occurred to me when I noticed that.

Do you have to arrange the dungeon to be more beautiful? Does the dungeon have its own notion of beauty and composition?

There are multiple schools of philosophy on this, ranging from super mystical to pure epistemology. The “meaning” behind the location of the rooms with respect to the human body are numerous, though in general Keter (Crown, here) is the head. I’ve created the map in Dungeonscrawl but I plan on getting an actual artist to do the final thing.

The central room itself I’m seeing more as a treasure room. Some interpretations see it as “glory” but others as “throne” or “beauty.”

I’m putting a Jewish vampire in that sucker.

The first thing I think of when I see a dungeon layout, besides the prescriptions for cool that consensus has built, is acoustics and visibility. Depending on the scale you are using, the Sephirot layout (which looks like it’s missing a room for Da’at) would give people in most rooms visual and aural access to many adjacent spaces, even farther, if there are no impediments. The dwellers therein, if any, will hear and see the PCs coming from a long distance away. If that is part of your plan, then I think it will work!

I’m more curious about how far you lean into the Sephirot for room content. My only note of caution is that some players may have a moment in which they say, “Oh… This dungeon is supposed to teach me something about medieval Judaism… Huh.” That could be good, but it could rub some players the wrong way.

I’m envious that you are getting time to make a dungeon!

Daat doesn’t always appear in the diagrams I’ve seen… It’s considered an “empty” slot in some traditions. I’m not against putting it there, of course! We’ll see.

As for the design, I’ve got a lot written about what folks can hear: water, mud, engines etc. There is a lot in there, and most of the smaller conduits are not large enough to easily pass through.

The setting in general is sort of a fictionalized Jewish setting, but most of this stuff is not visible to the players unless they poke around!

I love the layout and knowledge\lore dungeons are my fav so I can’t wait to see the content when it comes out. My only suggestion is that the paths visually look great but functionally make it like you can go everywhere? You probably have a solution already in the content but that’s my only initial reaction. I whipped up a quick edit of how I would run a symmetrical dungeon like this one, using keys then lore to proceed. I hope you don’t mind and it gives you something to chew on. :3 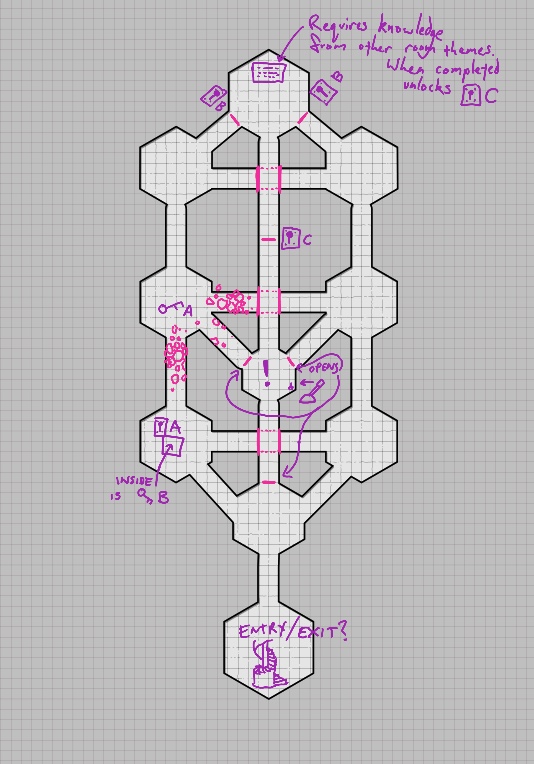 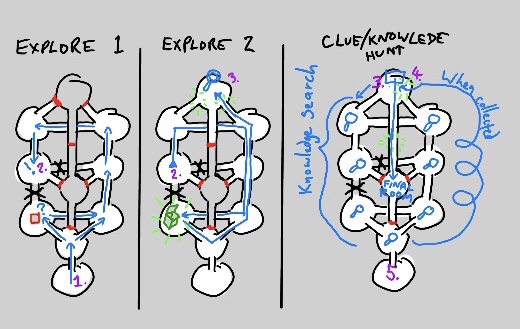 I especially like dungeons that purposefully have you backtrack or revisit rooms; and mysteries/puzzles that don’t rely on rolling but instead gives you all the clues and the fun is assembling/understanding it to proceed.

No, not true! The two paths starting from the Crown (on the very top) are both open, but the middle is mostly blocked. In fact, the middle conduit is dangerous for other reasons, even if PCs could get in there…

The second pair of conduits (connecting to “Beauty”/the treasure room) are waterways leading from the Courtyard (“Wisdom”). Etc.

that purposefully have you backtrack or revisit rooms; and mysteries/puzzles that don’t rely on rolling but instead gives you all the clues and the fun is assembling/understanding

Yes, 100%. That’s what this is. The whole thing will be traversable but some backtracking will be required. There are two entrances so depending where you come in, it should be different, as well… Honestly this is the hardest part: relying on player knowledge/skill, not PC knowledge, plus making the clues obvious enough without making it too easy…

I love your diagrams, to be clear the one marked “Entry/Exit” is in fact one of the entrances, the other being the Crown (though I’m not totally attached to that). I wasn’t planning on using actual keys but rather contraptions/multiple methods for unlocking important rooms, so that PCs would have to backtrack.

Ah!!! In that case I have nothing I’d change about it! It sounds excellent and I can’t wait to see it released!

I am more than interested in seeing further work of yours on this map or any other. Your analysis and thinking is interesting, and I’d like to steal as much as possible

This is a really interesting question, and maybe my response doesn’t quite address the tension you’re asking about, but I wanted to say this:

I don’t even bother looking at dungeons that have generic-looking maps unless something else about it catches my eye (like a cool illustration or a name that piques my interest). But I immediately recognized that Sefirot map even before reading what the post was about, and then when I read that it is a Jewish folk horror adventure, I was doubly sold.

I think my takeaway might be that a “generic,” usable layout for a dungeon is probably great for most dungeon maps, but if you happen to have a killer match between your theme and your map, you can’t pass that up.

Thanks, Jason. I suppose what I was “afraid of” was:

I wasn’t as worried about the first, especially since other folks here had the same ideas, even with way less info about the adventure available to them. The latter seems to be not as big of an issue, either (especially reading your comment). So yeah, I guess I’ll continue digging into this (I’ve already written most of the rooms and the adventure itself). When I first ran the adventure there was no dungeon, this was added on after, but I think it might be the finishing bit of the puzzle that I’ve been waiting on.

Weird stuff coming, that I promise.