In my last sessions, the text-based, slow-paced nature of play allowed several of my players to do something awesome: they speed-sketched what their characters were seeing, and the locations, live.

Players cheered, I was stunned for a moment, and it helped bring a lot of atmosphere to the session.
It made me think. There’s a lot of games and game mechanics that encourage certain game actions, like killing monsters, forming bonds, exploring new areas. Then there’s just as many discouraging game actions.

But what about encouraging meta actions, such as:

In my experience, when they happen, they’re quite impactful and things like extra worldbuilding, mapping and sketching can either totally carry the session, or provide enough hooks and ideas for the GM to greatly improve it. Else, they make players appreciate one another more, they get excited about things, and it gives them something to do between sessions.

I don’t really have a point, but I want to start a conversation about:

We play with a few. Most are evolutions of the standard ones you’ll find in older games. We have a Caller (generally in parties larger than four), and a Mapper (Dwarf characters get Graph Paper! All others get looseleaf).

I’ve been trying to bring back the Holmesian “Chronicler” with a modicum of success: 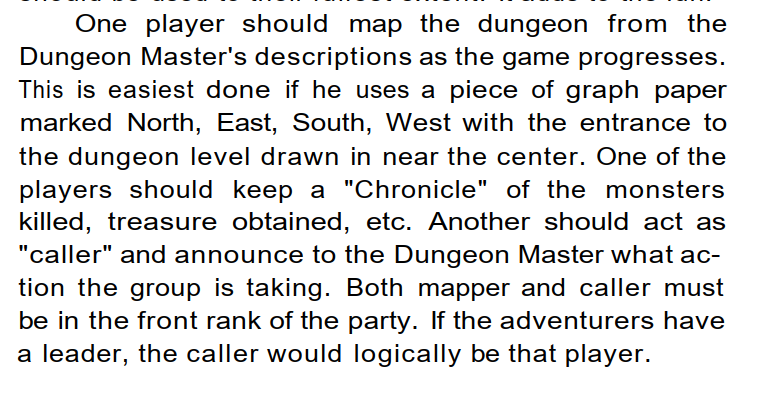 But other “Player Roles” have evolved over time and proved useful. We have a Quartermaster (who mostly tracks Rations and other Survival Supplies…they tend to supervise the occasional Inventory Audits as well). A Lucifer (who is responsible for Light Source awareness (Who has 'em) and tracking Torches/Oil). Very “Dungeon Exploration-centric” roles.

In Overland Exploration, these roles shift a little bit of course. Caller gets to set the number of Rests/Watches. Mappers help locate Features and improve Travel Times through areas traversed prior. Quartermasters are still there for Resource Management, but Navigator is employed to help Avoid getting Lost, and a Scout Role helps with the location of Landmarks/Campsite selection. Sometimes there is overlap, and players take on multiple Roles.

Many of these activities sort of come with their own rewards on a practical level (Caller rolls “the parties half” of a Reaction Roll to intuit disposition), Maps are often valuable to sell to others, etc. So I don’t really incentivize them too much. Some games don’t need certain Roles after all, and these sorts of things are highly dependent on what aspects of play a given Player finds enjoyable. Some like more bean-counting than others, and make great Quartermasters. Others like chatting to NPCs and make natural Callers. Artistic talent isn’t a pre-requisite for Mappers, but some naturally gravitate toward it

Delegation is a key part of meeting management - so much referee advice, especially in OC or Trad circles revolves around the “cult of the DM” - the idea that the referee is there to put on a show (often complete with smoke machines and snacks), but I think it’s mostly meeting management: presentation, facilitation and adjudication. You don’t have to use Agile (I am inexplicably a CSM … but I don’t like to remember that…), but damn those meeting management skills are good shit - especially with online play, because of Zoom fatigue (look it up, the business world has been in a tizzy).

Like I said delegation is great. As a Referee one has enough to do, so handing off tasks to players not only keep s them involved, but it lets the referee have a bet more attention to spare for running a game: providing good detail, responding well to player action – all the core elements of making a game compelling. I think a table (or a game I guess) encourages it by handing off the rolls to players explicitly. Like “Pick your Turnkeeper and Mapper and give me your marching order, PC names and ACs” (at least for my kind of game which is fairly high on the referee control) is the start of each game.

How could a game encourage these activities, or bring them to the front of players’ minds (since they would do these things even without a reward, but there’s just so much to focus on that they may not)?

TPK is a gmLess game. So the activities actually map on things that “someone” needs to do anyway. There is also a small reward at the end of the session for doing your job well… mostly as an excuse to lead Player attention to the activity and express a judgement on it. Did you do your job well? It’s mostly a prompt for social dynamics to engage

What meta activities are there that would benefit the group / the play experience in a novel way?

At the moment I have defined four, which are specifically useful for TPK gameplay:

In TPK these roles must be fulfilled by someone, and are thus spread evenly amongst Players. So a single Player might end up with 2, if the group counts only 2 or 3 Players

(I still need to test the system for solo play feasibility)

But in other games such roles can be optional, depending on Player’s interest and will to participate. IMHO they can help a lot with shy Players that prefer not to be in the roleplaying spotlight, but would still like to feel like a useful and active part of the team.

Like handling and rolling on some random tables might be delegated to a Player. Knowing which results are possible and how likely they are could even be construed as part of a Class skills… like the Ranger knowing the random encounters for an area, a Thief knowing the treasure tables, etc.

Or delegating the creation of narrative minutiae about a specific aspect of the game world, like, Francine is the “Keeper of the Woods” and she’ll tell us factoids about woodland areas working in tandem with the GM (if there is one) while Samuel is the “Keeper of the Jade Quarter” which makes him the authority about rich/merchant neighbourhoods in cities and villages.

I’d not seen the chronicler as a role before. The system I’m working on systematizes this a bit, so it’s not so much a role as a core gameplay element.

Specifically, trying to portray a more feudalism/senioralism focused society as opposed to our capitalistic one, I’m making fame and reputation core most of the game. To this end, players can brag about their deeds, and they need to keep track of their “legend” (as a party or per-character, depending on play-style) to be able to buy magic items and land, among other more minor benefits.

Ideally, after each adventure the party updates their legend with a one or two lines about the deeds they just did, noting how their reputation changes. This means they have a rough record of what they’ve done in a concise and reliable manner.

Also, when it’s tracked per-character, the legend sheet is a nice artifact of a character who dies.

It’s interesting how I glossed over this back in the day as well! We kept the Mapper/Caller tradition around but this one just kind of fell through the cracks.

Originally I imagine it was just a way to reduce the Referee’s cognitive load/tracking a bit, in the form of just terse lists of treasures/monsters, but in play it has served as more of a “party history” because it serves as a reminder of some of the Encounters/Treasures that they’ve experienced along the way