I intend to make this a blog post later, but for timing reasons, I don’t want to post it on my blog yet, but also it’s very raw and fresh so I want to post this somewhere, now. Admittedly this is not directly RPG-related, but given that I have been writing quite a bit of Mecha-related content as can be seen here and on my blog, and the extent to which that’s motivating me creatively for RPG writing, I hope this is considered sufficiently related to RPGs, especially since I intend to continue writing Mecha-related RPG materials. There is no off-topic section or else I would have put it there, so after discussing with @yochaigal I’m putting it here. I would have used a tag like review but one does not exist for inspiration, so instead I’m using the tag video since it’s a review (or rather a “not-review”) of a movie. ALSO NOTE THAT THERE MAY BE SPOILERS! 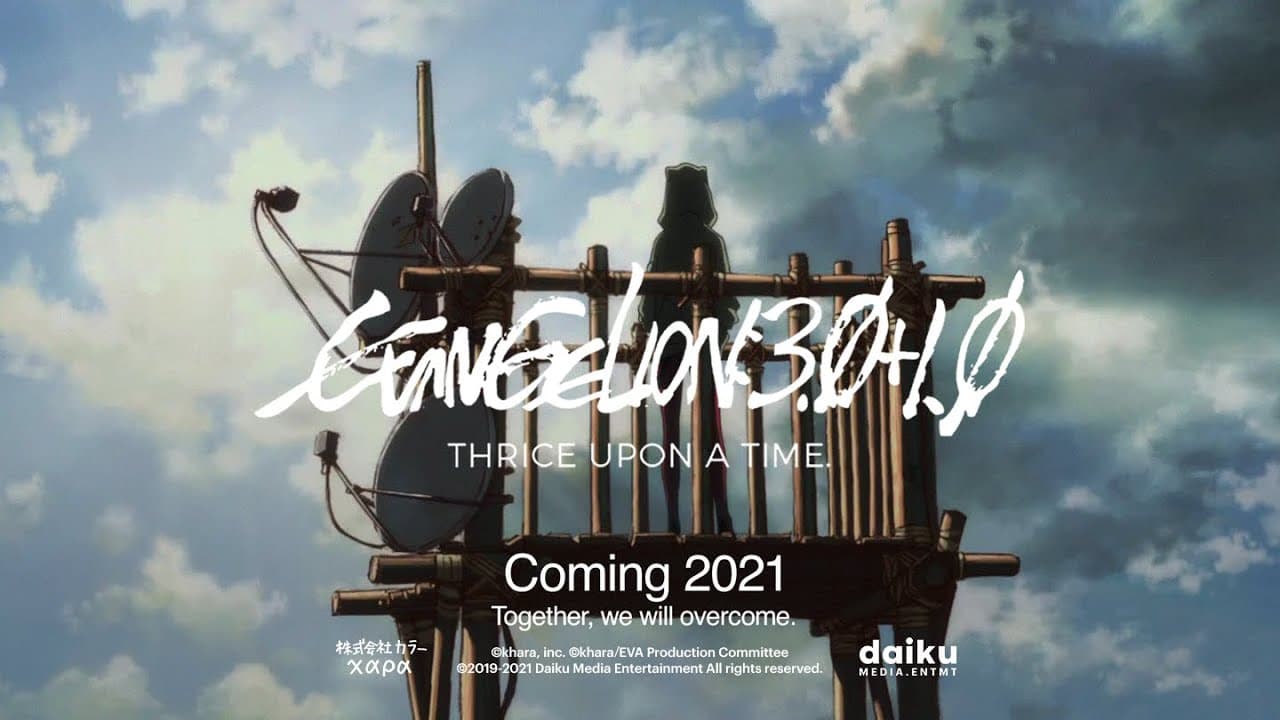 Probably unsurprising to read, but Neon Genesis Evangelion was formative to me creatively and personally growing up. It’s one of those series where, as a child, you can rewatch it year-over-year, and get a completely different experience out of it, because it is by design exploration of the experience of childhood. I have been writing a lot about Mecha lately, and this movie is making me remember why this genre is so profound to me, what kinds of themes it can explore, and it may even be changing the direction in which I’m thinking of exploring this genre further. It is a deconstruction of the Mecha genre in the best sense, regardless of whether some people think that’s an overrated term (I will run this bit into the ground I swear it!). It identifies the core themes of the genre, as well as the core superficial trappings, and it tells a story that uses those parts and is true to those themes, but all the parts are arranged in a totally different kind of way than anything before it.

This is not a not-review of the series, nor even of the Rebuild of Evangelion movies in their entirety, just of the final movie. But if it helps, I will give very brief thoughts on the previous movies. I watched these movies more or less as they came out, and they took around a decade to complete, so it’s been an interesting experience in its own right and many details are now lost to me, and also I was a different person upon watching each of these and did not do a rewatch and likely will not do so ever, although it’s not impossible.

First Movie: A mostly faithful retelling of the first handful of episodes of the show, but with a much bigger budget, and some general streamlining of the plot that worked in its favor.

Second Movie: Had some pacing issues, made some plot changes that I had mixed feelings about, but I respected that they tried to do something a little different with it. There were a few red flags, but on the whole, I enjoyed it enough.

Third Movie: I hated this movie with a passion. I won’t elaborate too much, because the fourth movie actually retroactively makes me seriously question if I fundamentally misunderstood this one, or maybe I could not have known what Hideaki Anno was trying to do until the fourth. I thought it had betrayed the underlying themes of the series in a critical way (as opposed to the second movie which made relatively “harmless” changes), but I no longer think this is the case.

This brings us to the fourth movie.

I wish I could give these really beautiful, sweeping reviews of the things I experience like Patrick Stuart does. I’d like to think I’ve demonstrated on my blog that I know how to write, and yet something about trying to coalesce my memories into words in some specific, coherent way… it just doesn’t have the same effect. That’s why I do “not-reviews”. But it’s a shame because this movie deserves that kind of review and analysis, the kind that is like a piece of art unto itself, that makes you want to have that experience- that may very well be better than the experience per se.

In lieu of that, I’ll just say the following things. First, because it’s easy to start here, the movie is gorgeous. I don’t just mean in a big-budget sense, although certainly that, but it is just very visually interesting. It wasn’t quite as experimental as I might have liked, as a younger Hideaki Anno might have done, but it also doesn’t fall prey to lack of constraint either, as is often the case when creators are given unlimited resources and nobody telling them No. It does some things I’ve never seen before; it felt like a big-budget Saruri-Man.

There are battleships and Mecha being puppeteered on strings, with gun-hands on a discus, being launched like missiles, on massive whirling planes of red and glowing colors; massive airships with cyborg parts on top of something like a whale carcass, weird dangling double-“headed” Mecha arm monsters…

But also, it explores THEMES. This fourth movie made clear to me, that these movies were really more of a spiritual sequel to the original series than a remake. Yes, it retells the story in broad strokes, but it’s exploring something else, and that exploration is a satisfying evolution of the original series. The last time I watched the original series in its entirety was over ten years ago, probably shortly before the first movie. Even at the time, I remember feeling like I was aging out of the subtext. That’s not to say I didn’t still enjoy it or respect it, but it no longer felt like there was more for me to gain from it, which honestly was a little disheartening. For the first time in ten years, across all four movies of Rebuild, Evangelion challenged me again, felt true to my current experiences and development. I actually struggled a bit last night, evaluating where I am in life and what I’m doing and if it’s getting me what I want… and admittedly that’s pretty normal for me, but in this case, I guess it was in a more fresh or profound way, that unfortunately I can’t better articulate, or maybe I just don’t want to because it’s a very personal experience.

The pilots themselves stopped aging for plot reasons, something which as of the third movie I thought betrayed the psycho-developmental subtext of the original series. But I realize now, that’s the point. Shinji was in stasis- he’s still the 13-year-old boy; the bridge, or point of reference between the two narratives, but also a reflection on our youth.

The “real” Rei (or one of them…) died at the end of the third and this new Rei is even more so a child- but actually, she’s really more a lens for somebody discovering themselves and finding internal peace. She lives a simple life, finds appreciation in others, makes meaningful connections. All she wanted was normalcy, and she finds it and is happy.

Asuka is on the face of it just as angry and frustrated as before- if not more so, borderline psychotic, like a hermit. But it eventually becomes apparent that she did in fact grow up, in her own way, and that while she’ll always be this anti-social and awkward person, she’s discovered herself a bit. She has unresolved issues, some of which she may never figure out, but it feels like she has made growth and is continuing to grow. This movie did right by Asuka in a way that I deeply appreciated, as Asuka was always the character I most resonated with (for whatever that says about me…).

Then there’s Mari. Prior to the fourth movie, I never understood why she was introduced. Why would you create a new character, in an already overstuffed narrative? And prior to this movie (or admittedly, even in this movie), there’s not too much to her. She’s got a bold personality, but she never felt quite like a real person. It becomes apparent in this movie, though, that really she’s more of a cipher (if I’m using that term correctly…), and maybe one could argue that that’s problematic, but I think it worked here.

In the end, Rei comes to terms with herself- her issues were always more personal than interpersonal. Asuka recognizes that she grew up and grew into a different kind of person than Shinji, and she moves on, but the break is amicable. Mari is the love you find later in life. You have Rei and Asuka, these proxies for Shinji’s sexual and romantic development (who also as I just explained, very much have their own narratives as well); these are the childhood crushes you think will last forever and have permanent importance. Mari seemingly comes out of left field, but in the end, they develop their little quirks together (cute little hand over eyes games and such), and although we don’t see the full development of their romance, I am convinced of its truth.

Every character gets a proper send-off, all of which feels deliberate and considered. The conversation that Shinji and Gendo have at the very end, especially, is such an evolution from the original series. Shinji grows into his own, not by becoming some badass tough guy who yells and screams and has his shonen moment, but because he is reflective and contemplative. He shows bravery and empathy. He doesn’t want to just defeat Gendo, he wants to understand him, and come to terms with him.

Looking back, and I know others have said this not just me, one complaint I might have with the original series, is that it narrowly straddles the line between grimdark and bittersweet. This movie feels decidedly more positivist, with still an appropriate amount of bittersweetness. It feels more adult- it doesn’t just identify problems, it tries to solve them.

Every moment of this admittedly rather long movie feels deliberate. It is clear that Hideaki Anno thought a lot about what kind of story he wanted to tell, how he wanted to reflect on his own life or life in general. I know that no matter how well told, no story is an accurate reflection of life, but if the original series is a reasonable metaphor for my own lived experience up to this point, and Rebuild is where I see myself currently, it is encouraging and inspiring to believe that maybe I can find that degree of growth and acceptance that the characters in Evangelion, that likely Hideaki Anno himself, have experienced.