This one might be fun. What are your favorite traps, and in which dungeons? These can be dungeons that you have run or only read, from a printed module or your own creation. Especially if it *transforms the way PCs see or interact with the environment during or after the trap encounter.

Spoilers abound! Let’s be specific! For example, the hammer trap on the first floor (the “false tomb” chamber) of Tomb of the Serpent King – very memorable! (Feel free to post about this one, too; I don’t have any play experience with that one yet.)

More a puzzle than a trap. Or rather an obvious trap that can be outmaneuvered.

In the Tomb of the Serpent Kings, there’s a filthy pool. The waters give mummy rot if you touch it. I love putting a magic sword down there at the bottom, pinned under a small rock.

How do you get the sword?

All the best traps are puzzles. I don’t like “gotcha” traps. Chris McDowell (author of Into the Odd) has written good stuff about traps and his first bit of advice, which is controversial but I think it’s great, is to not hide them. Basically you show clear signs that something is off - scorched bones around a flame trap area, for instance. Then the trap immediately becomes something interesting, not a boring surprise damage opp for the GM.

Echoing both @DreamingDragonslayer and @rayotus that the best traps are puzzles:

One of my favorite collections of puzzle traps is S2 White Plume Mountain. I highly recommend reading through the module even if you never run it. It’s basically a series of connected puzzle rooms, traps, treasures, encounters, and combinations thereof.

I particularly like an early encounter where the players walk into an easily pierced, magical tunnel through the middle of a boiling lake. Any moderate pressure on the tunnel will put a hole in it that spurts boiling water.

Eventually they reach a domed area with a giant crab guarding a clearly desirable chest. The wary crab knows how to fight without breaking the forcefield. It’s just an open area so there’s nowhere to hide or sneak. The chest contains a magical trident that, if used, can mend/stop the collapse of the tunnel. So, the PCs have to somehow get past the crab without collapsing the tunnel to get the treasure, which could theoretically save them.

(Side note: I’m pretttty sure this one is based in part on the Fafhrd and the Gray Mouser story, “When the Sea King’s Away”)

Yes, definitely! And personally, I don’t think that stance is very controversial. I’ve heard much of the same sentiment around the OSR and elsewhere.

Others have mentioned it, but I think traps are tricky because the understanding of their function in exploration based games is often obscured. Too often they’re a surprise, a trick, and too often this can be seen as unfair.

The hallway/gotcha/environmental trap is especially tricky. I’d avoid it entirely in a game that’s not about risk v. reward and resource management - because there’s no existing framework for balancing caution v. risk and the unexpected trap risks becoming “rocks fall you die”.

Puzzle traps (which I’d distinguish from trick monsters/encounters - though they are similar), are something else. For me the work best when they offer something obvious. A gem in the eyes of a statue being a tradition puzzle trap where the players decide if the reward is worth the risk and how to test the puzzle.

Other then these distinctions I tend to like traps that are clear and make sense. Overly complex traps or odd magical traps aren’t very exciting to me. Stuff like grimtooth’s where its clearly referee and designer indulgence about trying to kill characters.

To offer a slightly different view, I think traps that spring on you can be interesting if they create a puzzle after they spring that you have to deal with. For example, this is likely one of my favorite traps: 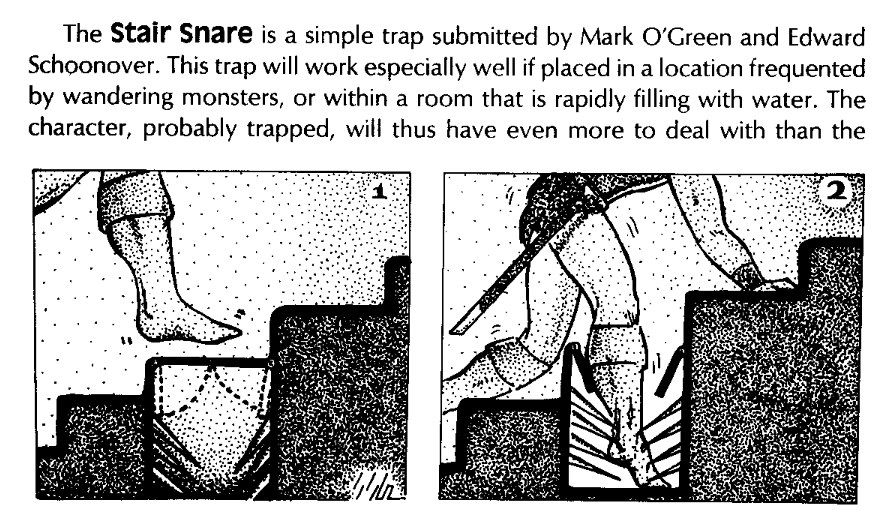 Now, that’s pretty obviously something you could telegraph but the solution is rather boring, right? What happens afterwards though could be pretty cool. “How do you get your leg out?” is a valid question that could be fun to explore.

If the goal is really to have a negative impact that can be avoided through problem solving, it’s totally possible to have the trap spring without warning and then have the sprung trap present a problem that can be dealt with.

And that stair snare is a great example of that.

I would say that a trap that traps characters can often present that kind of puzzle after being sprung - some difficult, but possible, constraint to escape from.

Oooh that is a good point, I think traps like that that create open ended problem solving with potential consequences but not assured consequences are less onerous from a player perspective. They feel a bit like random encounters in that regard I think. Something that is sprung on the players but the result of which is open ended.