Had fun with a Hex Flower to suss out some faction situations for last night’s D&D 5e game. The setting was a powrful lich’s sanctum, built under a volcano in the Shadowfell that spews negative energy. The lich was just killed and would reform near its soul jar soon but the incident was enough to cause the delicate balance of power in the area to become a mess.

I printed out a blank hex flower that I had handy and jotted down some notes while eating dinner before the game. 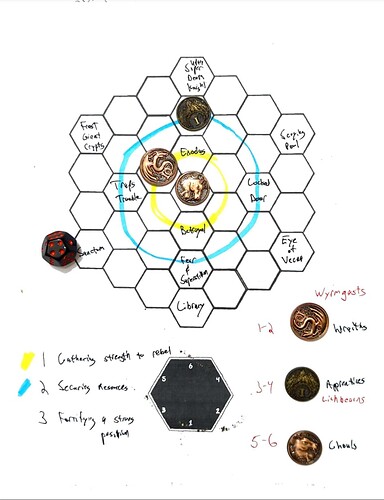 I’ve got the center, where I started each faction (this time), rolling twice for each faction. It had been 2 days since the lich had been killed, so I decided I’d roll once per day or if there was an event that caused a possible power shift.

I’ve got the first yellow ring, which I’d rename UNSTABLE (forces within are beginning to rebel), the blue ring which I’d rename DRIVEN (faction is moving aggressively to claim a resource in the lich’s negacano) and the outer ring FORTIFIED (faction has a resource and is putting it to use).

I could see an option where I start each faction on a resource in the outer ring and then see if they hold on to it or fall towards inner rings - or start some factions on the outer rings, showing that they have power and resources and others in the center, showing how they are trying to grow and gain power.

It was a really fun tool and had a definite effect on the game, giving each faction a kind of quick local history. I knew that the nazgul-like leader of the wraiths was dealing with AWOL wraiths and possible rebellion. It was fun.

It didn’t come into play but I could see that the apprentices were working on gaining control of some kind of ultra-super-death-knight thing that the lich had been working on, probably somehow using negative energy lava. And I can see that using the adjacent hexes as inspiration. Maybe future hex flowers I made like this will have all hexes filled but I like the mix of specific and vague.

I like how I can have general factions states in each ring with setting specific events or things in each hex. I could see adding another descriptor of some kind in the directions, quartering the map up to see if they were loyal to something or if they were looking for help in some area.

Already have another hex flower sketched out, thinking of using it to populate a dungeon with factions in motion - very much inspired by Between Two Cairn’s recent discussion of DNGN.