I ran an adventure for my neise and her group of friends a while back. Now one of the mom’s wants my advice on a very simple way to get her 8 year old started running games.

I’ve already linked her the dnd essentials box set with the caveat that it’s not simple and told her that I will send them an alternate ruleset to get her son started as well as a very simple adventure. Her son is 8.

I’m thinking maze rats will be best. The less rules the better. Might include some FKR style ruleset if it does a good enough job explaining.

I also need some adventure or scenario to include.

Ideas for super basic, hopefully little to no mechanics adventures?

Some one page dungeons might be good I’m thinking Burial Mound of Gillard Wolfclan or Chasm of Coalhaven for something a bit more complex. Belly of the Fishy Beast by @DreamingDragonslayer is another good one for kids.

Starworn, Chapter 1, is up on StoriesRPG.com for free download, and is designed to be run without ANY preface or prep by kids and parents new to TTRPGs. It teaches as you go, with no need for any “pre-reading” of rules.

It includes pregenerated characters, coloring sheets, and it’s designed for print and play - AND there’s an accompanying AP podcast for kids by the cast of Stories Podcast, so you can listen to prep if you like!

The art is really awesome (I’m biased, but my buddy, Rob Hebert, is amazing!). Here’s the title page: It’s also going to be followed by monthly releases of new Chapters, where the adventure and the podcast story arcs will intersect from time to time. If y’all play, PLEASE do let me know - I’d be so excited to hear how it went!

Thank you all for your suggestions. I think Starsworn might be a bit much.
To clarify, it is the 8 year old who will be the referee. This would be one of their their first forays.

Those one shots look like they contain a bit of mechanics in them. Probably still usable, but I want to make things as simple as possible for them. Maybe something like Temple of the Moon Priests would work. Just a pretty map and some great ideas for the rooms to run with. 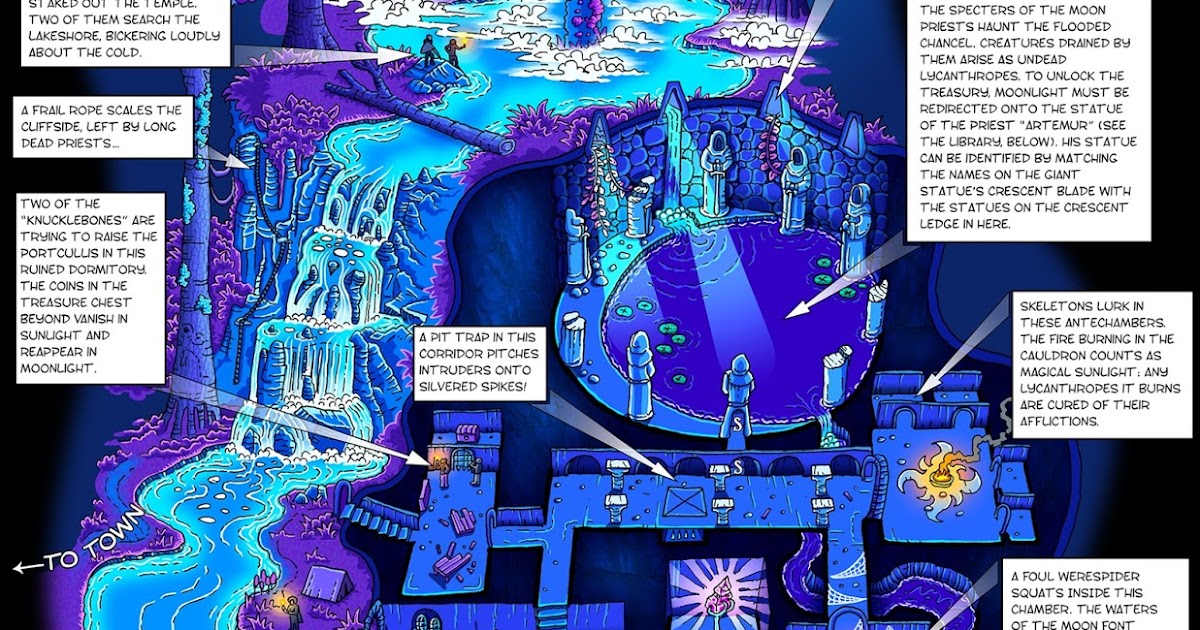 "Deep in the forest, a flooded temple holds the secret to a dying king's life. Can you untangle its mysteries before your rivals?" ...

Warning: the moon/statue puzzle can be difficult to run from the text without doing prep.

I’ve brainstormed with my nephews on how to run couple weeks back. We did an exercise by letting him make his own maps (a blank template with maybe 3 rooms max, and a small town) and let him fill their areas out themselves (assisted with roll tables if he was stuck and happy to roll dice) then assisted with putting a quest behind it. That way the load on memorising is not as daunting due to it being their own creation, but case by case depending on how they digest information. He preferred visual prompts with keys than text boxes.

If you haven’t considered it yet, I really think *Alchemist’s Repose is a great teaching dungeon. Also, it’s possible to finish without harming any sentient beings. Enemies are plants and robots and physical hazards. And by robots, I mean they can be presented as Golems or like steampunk clockwork-style automatons. They are essential to the puzzle of the dungeon, which is basically a big escape room. Fits very nicely into 1 session, with plenty to do but not overwhelming.
Edit: I’m not a good judge of what’s age-appropriate in terms of difficulty, but this adventure is very straightforward in terms of presenting clear decisions - can be solved based on zero knowledge of mechanics and no reference to setting. Would work well with Maze Rats, Knave, etc.

I have to agree that teaching an eight-year-old to design their own dungeon sounds like a much better method of getting them to run.

@directsun, maybe you could send the mom this Chris McDowall video, I think his simple “rectangles in Microsoft Paint” style could be a good place for a kid to start: RPG Dungeon Design - Part 1 - YouTube

I’ve thought about it, and I think having the new GM do their own is the best idea, like the others said. That way they can talk through and reflect “what did I expect, what happened” which is really clutch, at any age. People have many varied opinions about Matt Colville’s newer content, but I think this basic video from 2016 – Your First Adventure – is really helpful (for adults, too) to think about just *five encounters (or rooms, or scenes, etc.) and just focus on those. (The Dungeonographer stuff is totally *not required, of course. Just drawing boxes on plain paper = gets the job done!)

You already have some great advice here in the above comments. For a super easy system to use with kids, see Roll4Shoes, and yeah, use a one page dungeon for the adventure. I’ve had success with Mount Zorgoth. I don’t have the links handy atm, as I’m falling asleep while typing this, but I’ve written about it on my blog and linked it on this forum before I think.

Drawing boxes on plain paper gets the job done, but it might be more engaging for an 8yo if you cut some shapes out of construction paper and have them arrange them on a page and then draw connecting corridors between them.

I wound up sending a package in the mail including:
Maze Rats, The Alchemist’s Repose, Tomb of The Serpent Kings, The Seers Sanctum, and the paper minis that came with Knock 2. Along with a note welcoming them to the world of adventure games and a short piece of advice

“If something doesn’t make sense to you, just make something up. That’s what everyone else does!”

I didn’t take any pictures. I realized after I mailed it, that would be good.