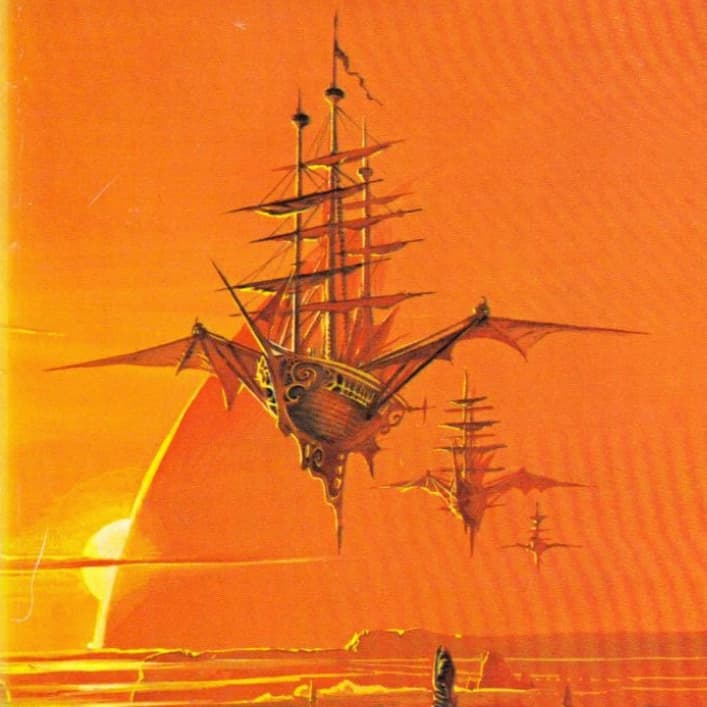 Question from the NSR discord community: What are your favorite modules for a science fiction setting to start a new campaign or as a one-shot?

For now, I am leaving this prompt fairly broad:

Any Classic Traveller fits well in your bullet points. Like many of old school modules they draft out a situation more than a story, which for me it is perfectly fine.
If you’re not familiar with the system you have to jot down the stats on your own, but I definitely recommend the ruleset also

Personally, I have less experience using modules in this genre. I *do use modules, and I have run sci-fi games (like Metzger’s Adventures on Dungeon Planet) … but only a handful of one-shots, mostly custom.

I haven’t finished reading it yet, but the module Desert Moon of Karth seems really flexible, in both tone and types of quests available. It was designed for the Mothership system, but strikes me as fairly system neutral or OSR compatible. Available at DriveThru and at Exalted Funeral (stock limited). Also, here is an excellent flip-through review by Questing Beast of Desert Moon and several other zine-size supplements.

Everything Mothership is excellent.

Besides that I like Every Star a Destination for the classic Star Wars vibes. BACK INTO THE BLACK... The writers and editors behind some of your favorite releases for the greatest space-fantasy RPG

I fondly remember the Star Frontiers modules, especially the Volturnus cycle, in which the shipwrecked players have to survive a “primitive” environment and get involved in local interspecies conflict.

I think the Pound of Flesh module from Mothership is an incredibly good starting situation, and the GM tools in it are really smart. I’ve even seen it used minus the horror stuff. (The Traveller-ish game I am in right now basically “started” on Prospero’s Dream (the station in APoF) but more as a backdrop for a different story.)

There are a million great sci-fi settings and modules, but I’ll recommend one that is maybe not quite as well known and is also very weird:

It’s got a weird science fantasy vibe but leaning into the gonzo sci-fi side. They’ve done a few issues, and that publisher has also put out some other cool, weird stuff.

@maxcan7 OK, so I’ve been curious about this one. For context: I just purchased 2 Worm 2 Furious by the same author, and I think it’s pretty cool. There are, I believe, a total of *five Stratosfiend titles: Volume 1 and then … #1.5, #2, and #3 … plus the spinoff Fae Harder. And most of these are written for two systems: separate printings for Troika as well as Dungeon Crawl Classics. I’m a little cautious of just getting one, if it means I might be tempted to buy all the rest, too. Which might be a good thing, but … yeah!

How useful is the first volume, by itself, would you say? Is it enough to run more than one session? And … which system(s) have you played or run the Stratosfiend with…?

I have not run any of them bc I only run my own settings or modules and I’ve actually never played any DCC or Troika so I can’t really help you there at all lol. I mainly read rpg settings or modules to appreciate them or to mine them for my own creativity.

It is a setting that I found personally very compelling; I mean no disrespect to the myriad other creators out there, but most settings are written to fit a mold, and Stratosfiend is one of the rare gems that feels uniquely it’s own. However, for that reason, admittedly it may very well not be quite what you’re looking for.

It’s been long enough since I’ve read it that I can’t say concretely, but a setting that is less so rooted in pre-existing genre conventions will necessarily be more difficult to run in itself no matter how well crafted it is otherwise. That’s not to give it a blanket pass, I just didn’t read it with them intention of running it and I read it a while ago too so it’s hard to say. If nothing else I think it’s worth reading.

To expand on one more point from your question, I do think there was enough content just in the first book alone to run a full campaign, depending on how comfortable you are designing your own adventures, but I don’t remember if it even had a pre written module let alone how robust it was.

I think there’s value in that kind of supplement, for sure. If I’m going deep on a particular mood, I can see really wanting something like Stratosfiend. Often I’m using modules as time-savers, though, so it really depends.

I’ve been enjoying the Mothership stuff in Dissident Whispers. I also dig the shorter Mothership adventures like Haunting of Ypsilon 14.

Edit: the adventure from the Orbital Blues playtest seems cool!

In no particular order:

A lot of people suggest Mothership and rightly so. I’ve run Haunting of Ypsilon 14 twice and both times it’s been a blast. It’s like a scary escape room set on a space station. Plus there’s this site which simulates the space station’s computer terminal (hold shift for admin access). This thing was a hit.

Solar Blades & Cosmic Spells comes with a great starting adventure at the end. It’s a “break out of a space prison” scenario. Great for getting the PCs together.

2400: The Venusian Job Is a great cassino heist scenario. Has everything you’ll need, can be played on itself and its mostly system neutral.

Offworlders in PbtA fashion, has all the advice (and a example) of building a situation, throw the players directly in the middle of action and build from there.

Oh yes, the 2400 series of games are great adventure generators.

I think the cover art of all the 2400 series is very evocative. It definitely makes me want to get them

Plus SB&CS has dome great tools for any sci fi RPG. Stars Without Number too.

Cross-reference with: Science Fiction and Space Games (or supplements)
For convenience.