So a while back I ‘acquired’ the pdf for wotc’s Icewind Dale module and have been poking through it since. While I consider much of its content to be sub-par (and horribly layed out besides) or just not to my preferences, there is enough in there that I felt like it’d be fun to do a broad remake of the adventure! I’ve got bits and peices done already, and I figured the best place to chronicle it would be here!

In the cold north, over the mountains, sandwiched between the grand glacier and the grinding sea ice is the icewind dale. A desolate region of tundra, sparse forest, and glacial lakes. The region has been inflicted with a curse of everlasting darkness by the Frostmaiden, which is slowly driving the locals to ruin. The only thing keeping ten-towns (barely) afloat is the chardalyn-rush, though that’s brought problems of its own in the form of greedy mining company agents, and fervent prospectors…

Chardalyn -
I thought that as it stood chardalyn was a bit boring, so I tried to rework it to give it a solid aesthetic/gimmick, and then coupled it with a gold-rush deal to spice things up (and play into the vaguely western reorientation I’m going for (which I based of a singular line of description which described the arcane brotherhood as acting like ‘gunslingers’ despite never supporting this))

– A glassy black metal, found in deposits across the dale. Easily worked with and conductive to magics. But it has corrupting health affects, sucking the warmth out of surroundings, over-handling can lead to necrotic cold-burns. The metal is highly sought after by southerners.

The Frostmaiden -
Titular though she is, I found the goddess rather lacking, being a bit of a generic villainess with a somewhat discordant (to me at least) aesthetic. So I figured a better route would be to go full Ice Queen for her,

– A regal figure, elegant, courteous. Utterly lacking in emotion. She has decided to do away with seasons, which are always destroying her beautiful ice and snow, and thus has banished the sun from the sky. Casting all her realm into perpetual twilight. Some petitioners from ten-towns have tried to reach her palace atop the high glacier, but none have made it so far. On nights that the auroras dance, you can see her surveying her realm from her flying chariot, pulled by four snarling snowy owlbears.
– Wants : Perpetual beauty, to stop disruption, proper respect
– Servants : Snow Wraiths, the Black Wolves 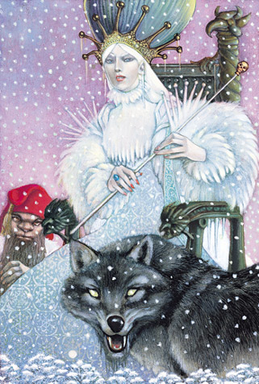 The Curse -
Giving a specific timeframe made the curse feel weird for me, I think it works better more loosely.

– The Frostmaiden has forbidden the sun to rise upon her realm, casting all into perpetual twilight. Slowly the waters have frozen, animals starved, and plants died. If curse is not soon broken the dale will become an icy waste devoid of all life but the toughest lichens.

Might rework the Frostmaiden further, there should be more hooks to interact with her with, and more ways to convince her to break the curse, or trick her, or so on. Also Chardalyn could be a bit better, I feel like it could be more ‘corruption-y’? Further details to come as well, specially on the Arcane Brotherhood. Please give me your own ideas and suggestions!

Now there was an evil druidess hanging out in the woods making all sorts of animals cause wanton terror including an albino killer moose (which was pretty great not going to lie) so why not go full princess Mononoke with her, she’s organizing the spirits and animals (there’s already lil nature spirits in fact so easy incorporation) to drive out the ten-town loggers, fisherfolk, and the southerner prospectors who are tearing up the land. Perhaps the druidess blames the ten-owners for the curse to.

I’ve been prepping up the second half of Icewind Dale, extensively reworking it and trying to sandbox it a bit. My group’s done with the whole chardalyn dragon and the duergar, so now the focus is more on Ythryn and other people around Icewind Dale.

I thought the frostmaiden was really boring because she doesn’t really want anything, it all seemed kinda vague, so I re-wrote her thing, tying her to Ythryn more directly. In my game I have her attempting to use the Codicil of White (now a living child) to get into Ythryn to retrieve her powerful artifact - The Rod of Winter.

There’s also the wizards of Thay waging a shadow war against one another, all unknowingly working for the same master; giants who want to bind a fire spirit and melt icewind dale, turning it back into their molten home from thousands of years past, and an army gathering under the banner of auril, who is actually working against her.

Not sure if this is really relevant, but I thought I’d share the ideas I’ve come up with over the weeks I’ve been prepping this module. The book itself is quite boring and can’t hold a consistent tone to save it’s life, but that’s 5th edition for ya

Exactly! Like you just fight the frostmaiden pretty much, there’s not really any mystery or anything either. Interesting on the duergar, Im kinda eh on them, perhaps you convince me they’re fun? Oooh the fire giant bit is excellent, love me some deep time (shallow deep time I guess in this) motivations, honestly that’s really great and a nice thematic balance to all the rest of the ice and snow.

I love your ideas! Share more! Also yes it can’t for the life of it hold a tone

I think Imma turn the arcane brotherhood into basically a rival adventuring party, I think the module made a mistake in starting them split up, cause its way more interesting to have them as one faction but with the underlying tensions players can exploit to break them up. Also Im going to make them gunslinger cowboy themed because why not and they could use a coherent aesthetic.

The duergar were a bit lame imo, I kinda liked that Xardorok thinks he’s listening to his duergar god but it’s actually Asmodeus, but that really never comes up again so seems kinda lame. I made the chardalyn dragon breath pestilence rather than whatever random breath it has. The theme of my game was supposed to be hopelessness and desperation, so even after the dragon was defeated, the plague it breathed has lingered, and it’s created a ticking clock that I’m using as time pressure in the second part of the game. Xardorok was forgettable, but no one can is able to forget his dragon.

Hmm, y’know maybe tieing the dragon into the fallen city, and having it be some kind of ancient ythryn super-weapon could work. Then have some minor faction digging it up/activating it/etc…