You seem to have a very specific idea in your head.

I don’t think The Hobbit or Over the Garden Wall are very helpful examples, because I can think of any number of ways to adapt those works of fiction into RPGs. And, if I recall correctly, Labyrinth doesn’t let the GM choose the order of scenes, the dice do that.

It seems to me that the key thing you’re looking for is “the players don’t decide where to go, the GM decides where the PCs end up.” I think, to make that work, you would need a scenario in which the PCs (a) have no means of knowing what is ahead of them and (b) have a single direction they’re trying to go, like “head west.”

This structure that you have sketched is an interesting one. If I’m reading it rightly, the endgame is accessible to the players at all times after at least one scene or location. But, presumably, they know that they can continue to explore, presumably to build up resources, allies, magical objects, keys, or whatever, to make the endgame more likely to turn out successfully.

The other factor unknown to us discussants (and maybe to the Referee!) is the time available. This pattern can be expanded or reduced like an accordion.

It reminds me of some old-time quest video games, in which the boss villain is visible, in some way, but nobody would go up to fight it until they’d built up whatever qualities are available through lateral excursions.

I think this would work for a fantasy RPG setting. In Rolston’s classification, it’d be a multi-option format, but one with special expandable/compressible properties.

Am I understanding your goal in this response to your diagram?

Also, as an aside, have you ever seen the flow chart for chase scenes in the old game Top Secret? One flow chart could be used for any spy-movie action chase scene. I wonder if it sparks anything with you, as you are thinking about scene structure. Basically, in this chase scene flow chart, players would not be able (especially in the thick of action) to discern the recurring patterns, but the possibilities are nevertheless not infinite. It’s an aid to Referees, of course. 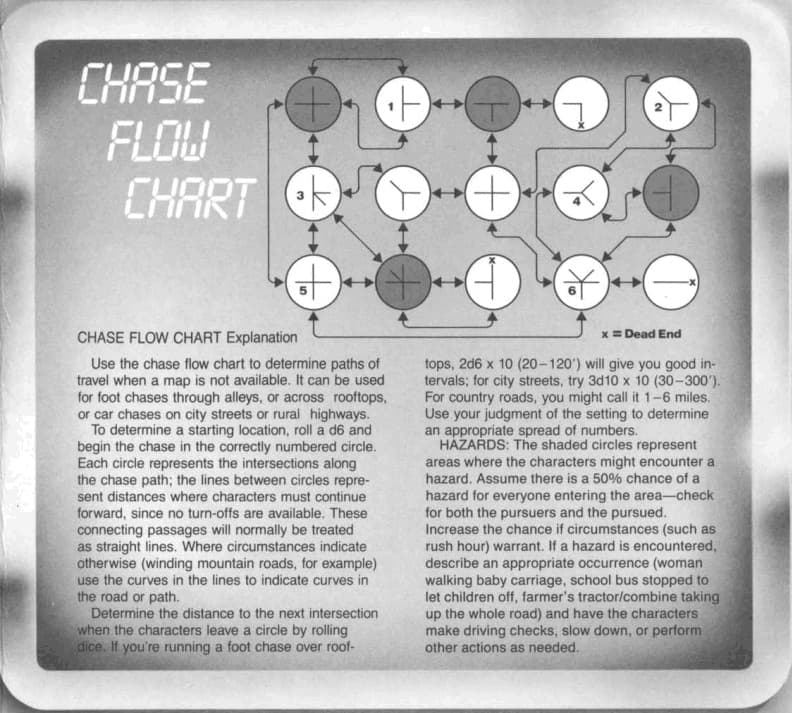 If I’m reading it rightly, the endgame is accessible to the players at all times after at least one scene or location. But, presumably, they know that they can continue to explore, presumably to build up resources, allies, magical objects, keys, or whatever, to make the endgame more likely to turn out successfully.

A game that does something like this is Rhapsody of Blood in that the end of the adventure is going to be a big boss fight, but the more mini bosses you defeat beforehand the better your chances of defeating the big boss.

if I recall correctly, Labyrinth doesn’t let the GM choose the order of scenes, the dice do that.

That’s true, it doesn’t. From experience, it doesn’t matter to the players whether the GM is rolling them or choosing them. The play of each scene is so rewarding and enjoyable in itself. From the player’s side, it’s pretty much the same either way. And I’ve done the reading for each scenario to know which speeds up the pace and slows it down, which is more likely to lead to combat and such. When rolling, you can go from intense to intense or slow to slow. Picking is more intentional, provided you read them ahead of time.

That’s a good point: no means of knowing what’s ahead and/or a single direction.

GMs then narrate the previous scene out and then provide the next scene.

If I’m reading it rightly, the endgame is accessible to the players at all times after at least one scene or location.

It could be. For the adventures I’ve talked about that’s not an option for the players, but the GM. You could easily run Labyrinth as a one-shot for example, the GM just tightens the constraints. “You’re already near the end of the Labyrinth with only 4 hours to spare. Here’s the scene. Go!”

But I hadn’t even thought to give players that option to “hit the button” that triggers the finale. It makes me think of Zelda: Breath of the Wild, where Ganon is almost always visible in the distance, but you’re not ready. You can charge at any time, but you better get some better weapons at least.

It would be nice in the case of those adventures that the GM also have some kind of “pressure release valve” for ending the campaign. Say players just adventure forever and avoid dealing with the adventure-ending “big bad.” The GM might have the option to make things worse, increasing the pressure, or just force the ending by having Ganon leave his castle, for example.

But yes, special expandable and compressible properties, allowing for GMs to add their own material to the adventure to make it their own and suit the needs of the table.

It’s funny that you say it’s “empowering the players.” In a lot of sandbox RPG scenarios, the players already have the option to fight the bad guy right away, if they so choose.

From that perspective, the whole structure you’re proposing is disempowering the players—they can’t choose where to go!—in order to give the GM more leeway in curating the experience.

I’m not saying that’s a bad thing, mind you. I happen to like plenty of videogames with linear storylines. With young players, especially, it might be good to take some control away for a smoother experience.

Tim, I think a lot of Sam’s advice and ideas (which I follow with high interest) has to be understood in the context of running games for much-youngsters, as you note at the end of your remarks there. You’re right: empowering youngster players doesn’t work the same way it does for, say, college kids–not in my experience, at least. We can talk about that, which might be fun (or not).

Also, in “sandbox” scenarios, the Big Bad is not typically right there at the near end of the “West Marches.” If I remember rightly, the West Marches idea was set up so that distance from home was equivalent to or proportional to levels of dungeon. But then again, the pure idea of a “sandbox” game is that there is no Ultimate Villain or One Obvious Quest.

You’re right, though, that if the metaphorical accordion of distance to the Endgame is in the hands of the Referee, that may disempower the players, in a manner of speaking. I just don’t know if players will be aware of that, if the referee is a good stage magician. What do you think?

It’s true and it think the focus then would be on designing scenes that really sing. High potential energy, high replayability between groups, good tables to fuel things.

I think of one scene in Labyrinth that has a corridor with a huge bird’s nest stuck in the middle of it, directly in your path. There are items in the nest, including a large egg. How do you deal with it? Do you stick around to find everything? What about when the mother comes back? Great scene. Anything could come before or after that.

Electric Bastionland at any level (the city, underground, deep country) could do this pretty well I think as far as the amorphous-ness of a place.

Yes, I agree: younger players and stage magician. I check both of those boxes. Also a need for highly-replayable, easy-to-remember adventures.

Just to keep things clean, scene-based adventures have these properties:

I think the best thing to do, assuming adult players at least, is be very up front about how things are going to play out - ie where the dial of sandboxyness is going to be turned to - and make sure everyone is on board for that. Set expectations. If everyone wants a sandbox and you don’t want to run a sandbox, then you probably should all do something different.

The discussion on this topic has inspired me to write something up that feels very related: Why I love Dark Depths

Is it basically a Detroit: Become Human approach? 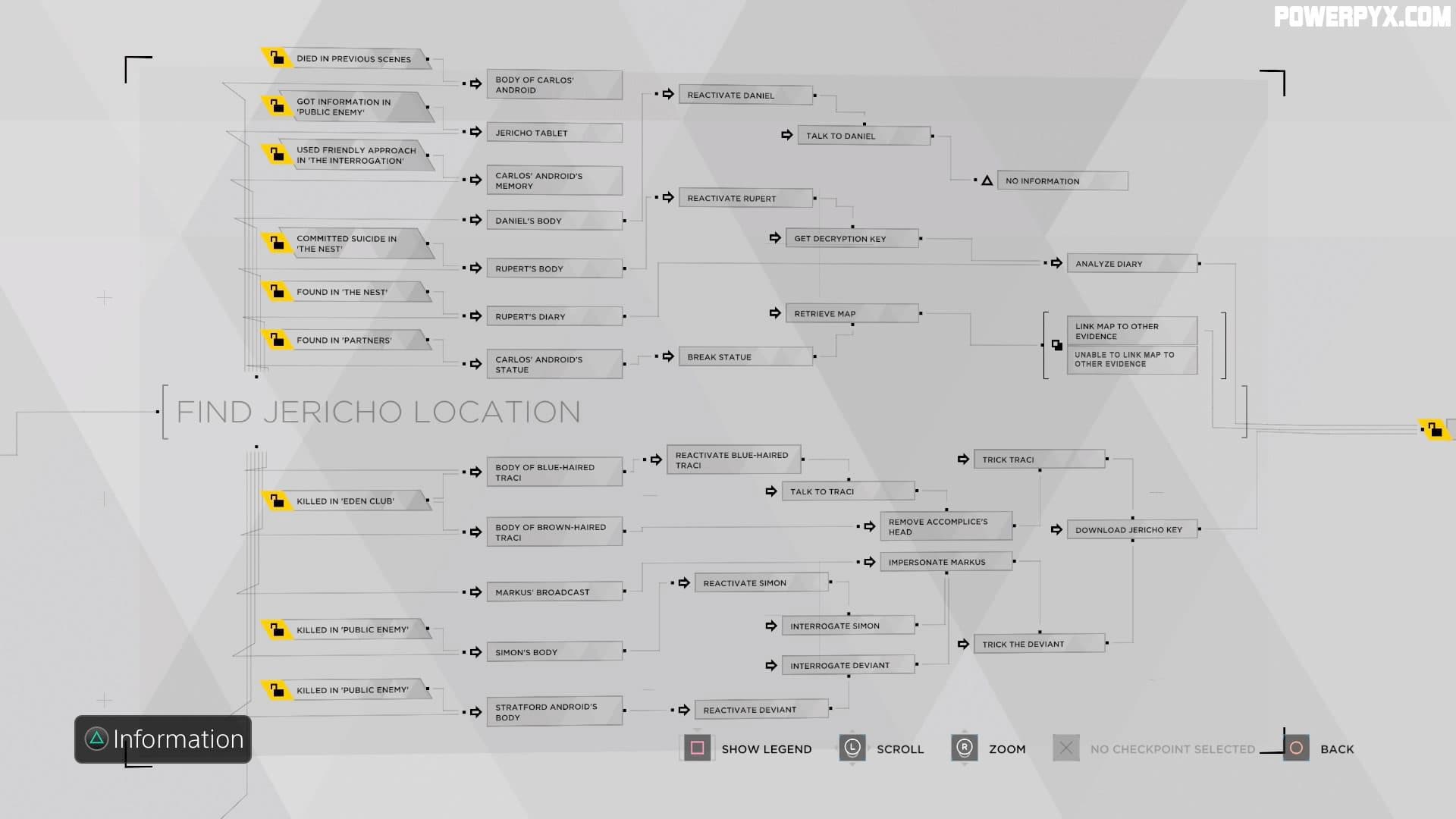 I mean, you have a series of scenes that you can either check or totally according to your choices and curiosity. According to your actions, you unlock further scenes or change the options in the following ones. Environment and sandbox interaction could be present but limited – it’s not the point of that experience. (Of course, in your description characters can go back and forth, there is less linearity; but, it’s the best analogy I’ve found.)

This is sort of similar to how I’ve run Trophy Dark - the players press ever onward into the dark forest, coming to challenge after challenge, until they finally reach the center Ring and everything comes to a head.

Yes, but also no. In what I’m proposing, there’s no need for the GM to look up the consequences of each scene. Ideally there wouldn’t be a flow chart. I’ve seen other adventures that do that and it seems too stocky for an RPG.

I remember seeing an GMTK video on this game though, is that right?

Another reminder to read this game. I’ll check it out!

This would be an amazing community project. Imagine:

Someone comes to the forum with the premise, first scene, and last scene. Each participant then builds one or more scenes that fits the context each with challenges, allies, and rewards of their own. It’s compiled as a zine. Boom.

We may need a separate thread for the creation process. I’m more than happy to continue talking theory over here.

How about this for a first attempt: Players have worked up an incredible debt in a labyrinthine casino. They’re on the escape from the owner (some twisted Willy Wonka-esque character) who keeps calling for their capture over the loudspeaker. Players navigate the gambling house/mansion while avoiding guards, bounty hunters, money monsters, and cameras. It’s like a reverse heist.

It seems a fun idea. How you would arrange it? Will you use a shared Google doc?

I remember seeing an GMTK video on this game though, is that right?

Yes, there was a documentary or something somewhere about how they developed all the story options.

I recommend checking as well Witchburner by Luka Rejec. It has a scene based structure, it could be of inspiration. 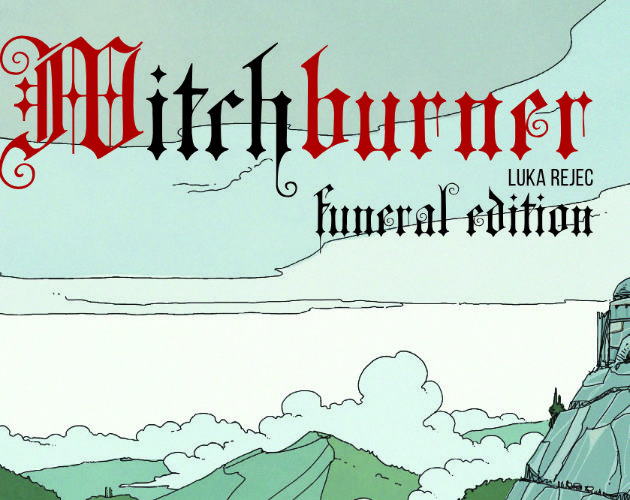 Google doc could work, but I was thinking to just start another thread under “Making” and go from there.

I might suggest starting with something more generic than a casino so that more people might be interested in contributing. A big forest or a Wild West, perhaps.

Woods are good. Have some spark tables for that already.

Should we make a fairy forest adventure for @yochaigal Cairn? We could leverage the “don’t leave the path!” trope ala The Hobbit to great effect here, methinks.