Setting and Cairn Hack: A Fantasy/Folklore Philippine Islands in the Advent of Colonization

I’ve been writing a system agnostic setting based on Philippine folklore, legends and myths and 16th century Philippine culture and society. This was a period marked with bloodshed, wars for gold and slaves, a way of life that tries to live within nature and alongside its other natives and spirits (with varying degrees of success), and colonization destroying that way of life and spreading a corruption on the islands. Working title is Islands of Blood and Gold. A bit generic, might change later.

In an incomplete draft, I have:

Work in progress on:

Other stuff to work on (will add as I remember more):

I have been blogging about it weekly for a few months now. You can get glimpses of the setting from these posts:

Very very excited about this, how are you setting up the foreigners roundabouts, going a more earthily approach as just other people showing up doing colonization, or are they more fantastical?

I did think of giving the foreigners more of a fantastical element, but I wanted to focus on the natives, the stars of the show, first. I’ll get to it sometime!

So yesterday, I wrote a blog about how I’m writing a Cairn hack based on the setting I’ve written so far.

I’m currently struggling through writing about magic for that one. Filipino sorcery and witchcraft can be either so subtle or “kills in one breath”.

Ooh yeah magic is always a really hard one to pin down, specially folkloric magic which usually makes attempts at structure feel too rigid and confining.

I’ve been following this series of blog posts for a while and am excited to see where this all goes!

Haha thanks @maxcan7. I hope your excitement can stand the wait!

Okay, I came up with something for my Cairn hack’s sorcery and magic. There was not a lot of examples of spells in the books I’ve read, and some were a bad fit for a game. What I did was took 6 base words, make them something like a category or school of socery which you have to invest into to get the more powerful spells of. It’s not levelless like what Cairn or Knave has, but this way supports the small spells and powerful spells that Filipino sorcery had. And then I liberally filled in the blanks with my own ideas.

I don’t know if the system or the order of spells is entirely sound, so I would appreciate some feedback.

Habit are incantations made of two words. Chanting these words cause magical effects upon the caster or his surroundings.

There are 6 base words: Agaw (Seize), Tawag (Call), Bawi (Free), Kulam (Curse), Baliw (Change), and Tuga (Gift). The second words to a base word are gained in order, from the weakest to the most powerful. Each word (base and second) is gained at the cost of 1 advancement point (See: Advancement).

The nature of Habit can be different from one Binmanwa to another. One may learn of a word from studying the Diwata in the stars. Another may hear it from an spirit who is fond of them. There are ones who even have the words tattooed to their body.

Agaw – Seize from your enemies from Near or Far. May what you take be helpful to you and harmful to them.
1. Agaw Bagay - Seize an object you can carry and pull it towards you. Remember to seize by the grip and not the blade. (1 Fatigue)
2. Agaw Isip - Seize the thoughts running through someone’s mind. Their secrets, or passing monologues, are yours. (1 Fatigue)
3. Agaw Bunga - Seize the magical effects affecting an object or being temporarily, whether beneficial or detrimental. This Habit is a double edged kalis. (2 Fatigue)
4. Agaw Galaw - Seize someone’s momentum, forcing them in place while augmenting your own movement. Become an usa while your enemy becomes a pagong (2 Fatigue)
5. Agaw Katawan - Seize someone’s body, overtaking their soul and giving you control over their actions temporarily. Two souls aren’t meant to inhabit one body, and yet that is our way. (3 Fatigue)

Tawag – Call and speak to the souls of the natives of these islands. Do not think that calling their attention is the same as gaining their favor. For that, you have to work.
1. Tawag Halaman - Call the vibrant plants and trees. They are connected through the dirt and waters. (1 Fatigue)
2. Tawag Hayop – Call the magnificent beasts. Treat them with respect; they were here before you. (1 Fatigue)
3. Tawag Tawo – Call the selfish Tawo and eccentric Other-Folk. Careful, they are not used to voices speaking in their heads. (2 Fatigue)
4. Tawag Umalagad – Call the ancient Umalagad. Tell them of your exploits; they are like doting grandparents. (2 Fatigue)
5. Tawag Diwata – Call the phenomenal Diwata. Endure their labors and you will reap their favor. (3 Fatigue)

Kulam - Curse your enemies with the vilest of magics. These are the words of witches and cowardly datu, but one cannot deny its usefulness.
1. Ligaw Kulam – Curse a foe with a blindness to directions. For d8 days, they will roam the wilds like a lost child, never finding the exit, without the light of stars to guide them. (1 Fatigue)
2. Salot Kulam – Curse a foe with a swarm of pests. A cloud of insects to bite them in their sleep, or a stream of rats in their farms. (1 Fatigue)
3. Suko Kulam – Curse a foe and they will not harm you for a day. Plots and schemes too far removed from them are fair game, however. (2 Fatigue)
4. Maga Kulam - Curse a foe and cause one of their body parts to swell to grotesque size. The swelling turns common actions into hard labours and if left untreated, can be the cause of death in d4 weeks. (2 Fatigue)
5. Kamatayan Kulam – Curse a foe by ensuring their death. Someone with the mark of death shall perish with the slightest bump or the shallowest wound. (3 Fatigue)

Baliw – Change yourself and others, form and mind. Unchanging is not truly static; it is the way backwards and towards destruction.
1. Baliw Ugali – Change someone’s current temperament. Weaponize the consistency of personality and the trust a community has placed on it. (1 Fatigue)
2. Baliw Biyas – Change a part of your body into another form. Tongue into long bloodsucker, teeth into fangs, arms into wings. (1 Fatigue)
3. Baliw Tanaw – Change everyone’s perception for you. They might avert their eyes from you and what you do, or you might appear dressed with gold in every extremity. (2 Fatigue)
4. Baliw Alaala – Change someone’s memory. Memories have always been unreliable; what difference does it make when the inaccuracies are molded by you? (2 Fatigue)
5. Baliw Anyo – Change your entire body into another form. What form do you take with this power? What does it say about you? (3 Fatigue)

INVOKING THE POWER OF HABIT

A Binmanwa can chant the words of their Habit with hands free or wielding a weapon. Doing so gives them Fatigue, occupying a number of inventory slots based on the Habit’s intensity every time .

Given time and safety, Binmanwa can enhance a spell (e.g. affecting multiple targets, increasing its power, etc.) without any additional cost.

If the Binmanwa is deprived or in danger, the Warden may require a LOOB save to avoid any ill-effects. Consequences of failure are on par with the intended effect, and may result in Fatigue, injury, forgetting the Habit, or death.

Mentala are bamboo slates with formulas and incantations etched onto them. They are similar to Habit, however they do not cause Fatigue , and they take up an inventory slot to carry, but burn up after one use .

Anting-anting are items, imbued with a magical power. They do not cause Fatigue. Anting-anting usually have a limited use, as well as a recharge condition.

Released an early version of my Cairn Hack, Mangayaw. 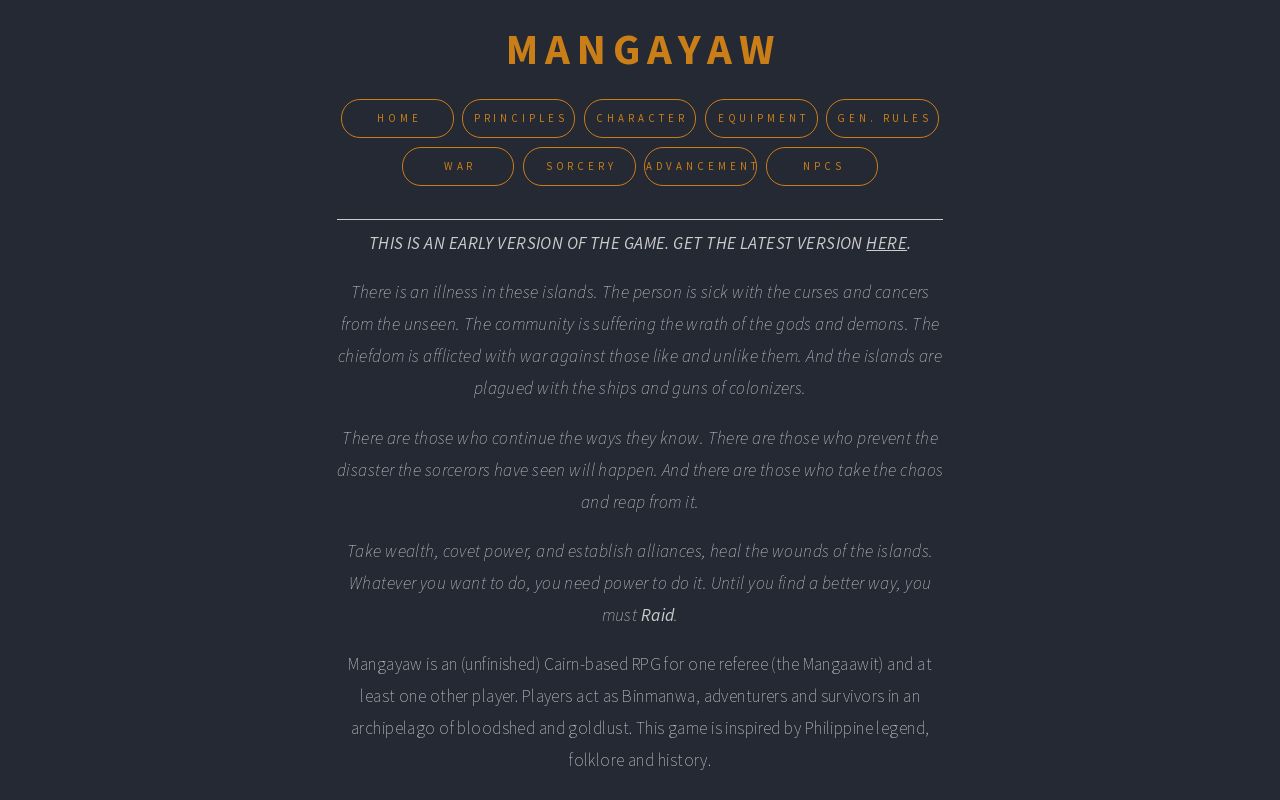 Play as Adventurers in Islands full of War and Goldlust

I dig this. Did not have time to read everything yet but what I have seen is very interesting,

That Magic system is great, love the vibes it gives off and how thematic it reads.

Glad you like it! The theme and feel is sort of the biggest thing I can contribute to this since the game is really mostly Cairn, so hearing that I nailed that part is music to my ears.

I’m going through my setting doc and giving it a more unique voice by making it read like it’s in the POV of a wisened native lecturing the readers about the islands. Hopefully going through the edits will get me in the zone and I won’t get stuck with any additions I took note of.

I might put the document out so it can be read and I’ll get some feedback about it. Writing in an echochamber with just myself and my own thoughts kinda sucks.

Finally, the draft of my Philippine folklore and culture-inspired fantasy RPG setting is at a state where I am comfortable showing it to other people, so I’m putting it out in public! Here’s a link:

A Guide to the Islands of Corpses.docx

A Guide to the Islands of Corpses and Gold From Then Till Now This Story is but one Song in a Sea of Voices. Before, there was only the Sky and the Sea. Bathala, the Creator, saw a coconut floating in the vastness of the Sea from his throne in the...

And here’s a little list of what you’re getting into:

Please read my setting and give me feedback. I wanna know if what I’ve been researching and writing this past half a year is worth it, hahaha.

I made it easier for people to know what my setting is about!

Last week, I released a live doc of my setting. I’m still working on it, adding a few more cultural details and monsters here and there. It’s really liberating to put my work out there and getting …

This is all very cool.

I went back to my Barangay generator and made some improvements. Or at least I think they’d be inprovements? There are separate tables for Barangays and Pueblos, and a new Settlement Relations generator. More details, more drama, so it should be fun?

A while back, I made generators for settlements of the natives of my setting called Barangays. They were, err, a bit lacking. One of my goals was that it could sort of procedurally generate faction…

Wrote a bit of an update. This is what I’m doing right now.

Hi! It’s been a while since I wrote on the blog about my Classical Filipino setting. I used the holidays as an excuse to put down editing it and refresh my mind a bit. Now that that’s done, I…

I shared some of the tables I made for my setting. I had a lot of fun making a feast table hahahaha

As I’m going through my setting document and trying to trim off some fat, I’m also doing some revisions and additions here and there. One part that got a significant revision is the Ancestries. Let…