I started this thread on the NSR discord server, but I prefer to keep it tidy in a forum topic. The general idea is detailed in this blog post, but here are the highlights:

This is the base for the world map (Anaximander’s map): 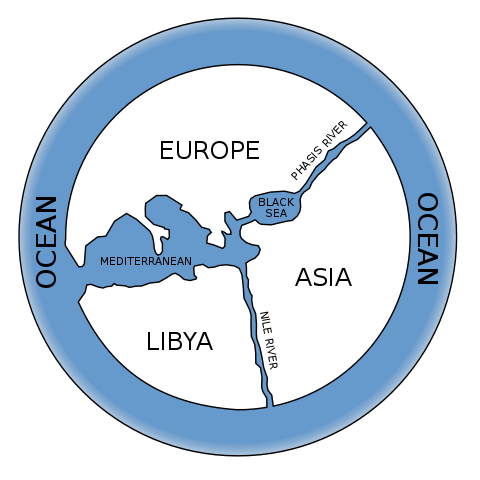 @yochaigal has already given me some good suggestions (especially given my lack of knowledge of ancient Greek):

For now I worked on:

Work in progress on:

nice! I do very much like how challenges are described in Ancient Greek Mythology (especially the odyssey). There’s definitely some overlap with OSR: everyday people have to overcome monsters and gods by coming up with a smart plan.

Gotta admit, @zeruhur, your blog post about this got me thinking about making a system based on Cairn too. Something to run oneshots and short campaigns in my setting with, when I’m confident in it enough. I would need to see how the homebrew rules I wrote would feel in actual play first, though!

maybe you could open a thread about this setting of yours! I am quite curious now

I believe it is a setting based on 16th-century Philippines. Basing it on Cairn would be perhaps the best compliment I could receive.

Also: 1000 1000 Islands, anyone? I know it isn’t the Philippines but there has got to be some crossover!

I believe it is a setting based on 16th-century Philippines.

right, I wasn’t make the link in my head

In the world of Thálassa there are two kinds of magic: Theourgía is the invocation of divine powers and Goïteia is the arcane magic (including astrology, alchemy and other forms of esoteric knowledge).
Everyone may use magic and Kanonas is the power source. Each time a spell, invocation, curse or divination is casted, the magic-user consumes KAN equal to 1d6 points. This determines the current level of KAN until recovered (the same rule for HP in Healing do apply).

Good map, I do like my ‘weird blobby antiquity age Europe’ maps. You should defiantly look at the palace of Knossos and other early ruins about Greece for inspiration concerning dungeons and labyrinths. Presumebly the theourgia will also feature lots of divine intervention, sacrifices, and divine favor/disfavor which should be good fun! Would you run the gods straight or make pseudo-gods inspired by the vibes of the original greek ones?

Oh and also for backgrounds, definitely have some handfuls of ‘foreigner’ backgrounds to help flesh out the world and have some fun options. A persian beuaracrat, amazonian horse rider, Egyptian fellow, etc…

I’ve been to Knossos!

Totally agree that looking to real-world inspiration is hugely helpful in grounding a setting, fantasy or no. I’d also recommend the Gene Wolfe book “Soldier of the Mist” for lots of human/god interactions in a Bronze-age world.

Would you run the gods straight or make pseudo-gods inspired by the vibes of the original greek ones?

I am trying to be adherent to the source material (Homer, Hesiod, Apollodorus) quite strictly, so they will be totally the original gods, demi-gods and creatures from the Myth! This is not to be a historical accurate setting.

I need to think about this… or rather research a bit about the mythical version of your suggestions.

You should defiantly look at the palace of Knossos and other early ruins about Greece for inspiration concerning dungeons and labyrinths.

Basing it on Cairn would be perhaps the best compliment I could receive.

You flatter me too much!

Also: 1000 1000 Islands, anyone? I know it isn’t the Philippines but there has got to be some crossover!

I do have foreigners (traders and pirates) based on other SEA nations and East Asian nations in my setting, so it isn’t outside the realm of possibility. I would have to actually read a thousand thousand islands zine first, though hahaha

I love the idea of mythical versions of foreigners to Greece, because its very fun a lot of times to look a how a particular culture viewed so and so other cultures in their folklore and mythology. Like how the mongols are characterized as boisterous, friendly but clueless foreigner warriors in some Indonesian works as compared to their usually ‘scary steppe demon horde’ characterization.

I’m getting some Whitehack vibes here.

I never had the opportunity to read the Whitehack

but I knew I wasn’t original.
I prefer mana pool magic systems. I like being able to give a measure of the risk of using powers. Normally I “punish” the magic-user rolling injuries and mutations (as I did for Roamers of the Dream), but I think in this particular setting it would clash: mutations of this type are divine punishments, usually for a more or less direct offense to the god or for envy (see Arachne i.e.).
I also didn’t want to make spell casting too complicated, rolling on too many tables.

This way I think it’s balanced: you know you consume one of your resources (kanonas) which will disadvantage you on some saving throws.

It’s interesting how spending mana will affect your saving throws. I’d love to see more of this as you develop it. I was never really a fan of vancian magic hahaha

In Whitehack, your HP is your mana. The amount of HP each cast needs is based on magnitude (from 1 HP to 2d6 HP). And it’s also flexible in that you can put limitations on your casting to subtract from the HP cost, or amplify the magical effect with some additional HP cost.

Looking at Knossos is a great idea. The palace is fascinating - and still fairly mysterious. (For example, it may been more of a giant community religious/administrative site than a traditional palace)

I recommend checking out more details on both ‘mythic age’, pre-Greek cultures, Mycenaean (mainland Greece) and Minoan (Cyclades, esp Crete/Knossos). I have a personal fondness for the Minoan culture which may have had interesting matriarchal, ‘socialist’/communitarian elements - and also enjoyed the potentially suicidal activity of bull jumping. (see the frescoes below, for images)

My strongest recommendation is to check out the Minoan frescoes, esp from Knossos and Thera, truly beautiful, light, flowing, flattened, abstracted images. I would guess that there are lots of public domain images of the frescoes out there that would be great material for illustrations.

Oh, and Cosmic’s other suggestion about including folks from around the Mediterranean and beyond as potential PCs/NPCs in the game is great. It was such a cosmopolitan world and those intersections are rich rpg material. (A different era but, the mutual, (mis)perceptions between Greece and Persia alone…)

I have a few suggestions for stat names, if you insist on using ancient Greek terms.

κράτος > kratos : strength [[as you said]
κουφότης > kouphotes : agility, lightness [This is not the best fit, as it’s not a Homeric word and it’s rare in ancient Greek, but it’s better than kinesis, which is really just “motion.”]
θυμός > thumos : willpower (soul, heart, desire, mind) [Not sure what kanonas is supposed to be…]

For DEX, actually, the best equivalent in ancient Greek that carries resonance in the language is probably τέχνη, tekhne, “craft, guile, art, skill.”

I used to teach ancient Greek, so I can help more, but at a certain point you have to use the language that is the medium of play, lest the game turn into a tutorial about ancient Greece–unless that’s your goal!

I once based a fantasy setting on Latin vocabulary, thinking it would help my kids acquire that vocabulary. In the end, it was slightly tedious when they just wanted to play the adventure. My advice is to focus on the adventure and the setting’s contents. The contents of the world will set the tone more than a special vocabulary for player character mechanics.

Then again, maybe it will work better for you!

I think like, regulation? See here. Like, standards? I can’t remember what was the reason in the original thread, but I seem to remember this.

I think we were looking at different ancient dieties and what they covered (though many overlapped). Thumos is very good though.

Oh, I get it! That’s not what the word means, though, really. First, In ancient Greek, κανόνας is grammatically accusative plural. Second, it means something like “tables.” It would work (in the nominative case, κανόνες) for something like “tables (of random encounters).” It can also mean standards, like lists of laws or regulations (esp. in tabular form). But θυμός / thumos is just the Homeric word for that indefinable intellectual quality of willpower, life-force, desire, soul, and heart. It’s an important word in ancient Greek epic.

It was such a cosmopolitan world and those intersections are rich rpg material.

This is an exciting idea for another game set in the historical bronze age. But it is also a different focus from that I have in mind for Thálassa.
You should also check out Fragments of the Past, that has a gorgeous art and Ancient Bronze Age vibes