At the beginning of the week I posted a review of the 2020 Singing Flame adventure Xanadu, a fairly popular POSR location based adventure that’s a fairly obvious homage to LotFP’s signature Death Frost Doom – the famous “negadungeon”. 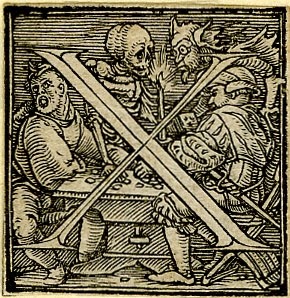 Xanadu is a 35 page, 33 key, location based adventure published in 2020, for Old School Essentials and Dungeon Crawl Classics by Singing Fla...

I was rather critical of Xanadu, largely because I think it fails as a negadungeon.

What is a negadungeon? For those that don’t know it’s a type of location based adventure design, popularized in the Mid-OSR (2011 - 2016) period, primarily by LotFP, that I think represents a genre shift in classic/OSR location based fantasy adventure from adventure to horror. Adventures that emphasize the horrific, usually through the use of high lethality traps/puzzles, body-horror permanent effects and a certain push towards disaster if the players approach the adventure as a typical location passed procedural dungeon crawl with a focus or treasure acquisition.

I think the negadungeon is a fascinating design form and am curious what other designers, referees and players, especially ones who weren’t involved in the G+ era/Mid-OSR think about them or what experiences they have had with them. Anyone else ever played through something they consider a negadungeon? Written one?

I don’t run negadungeons because they feel intended for oneshots and not long running sandboxes. I don’t really feel like putting deathtraps in my world, especially ones that permanently shift the setting like Death Frost Doom.

If they were to be included I would want to telegraph them really well the same way I would any other trap in line with the information/choice/impact method.

Interesting, I’m curious if you’ve played through anything negadungeon like in the context of a campaign? They certainly have an awful reputation, I think partially due to all the boasting about them from precisely the worst sort of referees and designers. Personally I don’t see a good negadungeon as a deathtrap, but rather a type of narrative/adventure structure about genre shift?

I also agree and think it’s definitional that the “negadungeon” should be telegraphed in several ways (aesthetic consistency, discoverable secrets/history, overt warning, increasing appearance of threat). This is so important because its central puzzle is figuring out that it represents a shift in genre preying on player expectation about the nature of their fantasy adventure. Also that to avoid a sense of unfairness that the destructive finale should come from player choice (and the same misunderstanding). Doing this while still providing challenge is what makes them difficult to design.

I’d argue this is why Tomb of Horrors isn’t really a negadungeon, but rather a tournament module and trap maze, with accidental proto-negadungeon sensibilities. DfD (and I do wish it wasn’t) actually manages this while also allowing the party a costly escape. Fundamentally the failure to avoid the negadungeon’s final act is the same as not walking into a dragon’s lair unprepared – the equivalent of the decision to pursue a likely TPK encounter (and like them should have options for player luck and skill to change the odds).

I’m curious about setting shifting - do you dislike it generally, as in preferring a static sandbox? Alternatively do you simply reject it as the result of a “deathtrap” or as the negative (but set up) result of player choice? Personally I like setting that can be shifted by player action or inaction. I like to use clocks, chaos indexes, random event tables, and faction triggers (I.e. players do X, faction A does Y) in my sandboxes.

In my home Crystal Frontier game the party is/was: unwittingly allowing an ancient plague wyrm to wake up (and avoiding a Negadungeon of sorts), antagonizing a faction that could ultimately call in a invasion (they can’t stop stealing horses - which suggests they don’t get that it’s a Western - despite ALL the telegraphing), and contemplating some actions that would release a space elf army from suspended animation (this being the ultimate setting disruption - invaders from the sky!).

I guess I just don’t like DfD in particular and the LotFP genre more broadly. I’m not interested in the way that it shifts the setting. (Oh, yay, it’s a zombie game now…) I think the key is probably finding a negadungeon that has a genre shift that you and your players will enjoy.

I am reading through Xanadu now and actually I think I might be more likely to use it than others I have read. The problem is that the text itself isn’t doing much in the way of telegraphing all the gotchas and I would want it to do more of that work for me.

What would you say are some really great examples of the form?

So the main issue here is that I don’t know of any actual negadungeons that don’t use body horror/grimdark aesthetics to signal their status. Slaughtergrid is the one that comes to mind as non-LotFP, and it’s got a fair bit of gonzo in it, but part of the reason I picked Xanadu to discuss the idea/form was because there are few that aren’t from LotFP, and frankly I don’t want to deal with their stuff.

I begrudgingly think Death Frost Doom is the best of them structurally (though yes zombie-pocolypse feels pretty old hat in 2022).

I’d like to see some new people try their hand at the concept, and think it’s ripe for a revival with the increased interest in Mork Borg. Of course that’s largely a one shot game, so the sacrament of death and joy of failure thing applies.

EDIT: Also I would be happy to help anyone around here or otherwise who isn’t LotFP etc, write a non-grimdark, pus and blood monster free negadungeon. I can cartography and know how to design dungeons fairly good for OSR/Classic/Procedural style play. This review and post are absolutely an attempt to get people interested in the form and offer some more contemporary versions.

Well you can consider my curiosity piqued. I had largely written off the negadungeon but now you’ve got my brain gears turning on how they might be better employed.

I think this was part of my expectations as well. I had assumed that the “nega” aesthetic wouldn’t appeal to me, but then again, I’ve never really read any examples. And I have been playing more and more Mork Borg, so yeah. Hmm.

Edit: I think the ideal way to play Mork Borg is as a 3-7 session mini-campaign, so I’ve definitely carried players through multiple scenarios before starting over. Sometimes the new arc starts with all-new players, but sometimes I’ve had some repeat customers so to speak. So it can be a bit longer than just one-shots, although the one-shots are great, too.

In my first NGR campaign a few years ago, I think Tomb of the Iron God served as a negadungeon campaign starter. It wasn’t intentional, but the players freed the demon-thing that was trapped there and very shortly afterward fled the dungeon. About here we played a session of Microscope to establish more setting and give the demon-thing some backstory, as a general in the evil army of the previous age. The demon-thing then followed them across the land slowly raising an army of the dead. They skipped town and hitched a ride on a ship to Hot Springs Island. Then the pandemic hit and the campaign fizzled. It was pretty cool seeing the players essentially create their own big bad for the campaign.

Overall though, I feel like the ones I’ve read aren’t very appealing to drop into a campaign. They mostly seem more bait-and-switch than a twist into horror. I think they could work well to start a campaign though. Kind of like the before-the-credits scenes establishing the mess that the rest of the movie deals with.

I always forget about Iron God - generally I’ve slept on those those Finch adventures (which I have never heard a bad word about, and instead have heard many good words). I have heard Iron God was “hard” but I will have to read it to see if it really fits the negadungeon mold.

Yes, campaign based use of negadungeons could be tricky, and as an initial sort of funnel/tone setting is certainly an effective way. I’d argue that a good negadungeon isn’t especially lethal necessarily (or at least that the “doom” within shouldn’t be. As a form I suspect they could simply be useful (as our Iron God example shows) for introducing change into the overworld and or providing a motivation for the PCs.

I don’t think it fits the negadungeon mold overall. It’s more that there’s this one encounter that in ASSH or whatever system the game was written in is probably just a hard encounter the PCs should maybe run from. But in my conversion to NGR I made it a nearly undefeatable demon. And then in the Microscope session afterward we discovered that it was truly ancient and powerful and was definitely going to end the current epoch.

But it is strongly signposted, like literally carving over the door “Don’t go in. Eater of Souls inside.” and the players went in and fucked around.

Interesting that it was a system adaption issue that transformed the adventure. I think something similar happened when I used 3E (Monstrous Compendium - the edition where the housecat will murder a level 1 wizard almost instantly) dragon stats in a B/X game. Dragons became demi-gods, which in retrospect was not a bad design choice.

I think though that you accidentally created a Negadungeon.

To me at least (and I may not represent the majority view here) that core idea of the Negadungeon is a place that the players a messing but shouldn’t be messing (to badly screw up a Nancy Sinatra lyric). The main design questions that follow are: