What games handle HP/harm in the most interesting way?

I’m looking to borrow some mechanics for the game that I’m working on, and I’m on the topic of “HP” now. Harm. “Still in the action” points. Life beans.

What RPGs, in your opinion, handle it in a unique or interesting way, without turning into a frustrating death-spiral?

Granted, my experience is relatively narrow, but I’ve never seen an implementation quite like DURF’s. PCs have Hit Dice (which double as levels). Each HD is a d6. You start with one, and add one each time you advance, for a maximum of 12 HD. Each time you receive wounds, you roll your HD, and if the result is equal to the number of wounds you’ve accumulated, you die.

Although the rules of the original Ars Magica game (1987) are much more complicated (crunchy) than people around here tend to like, that game has interesting rules for injury based on levels of description or states of injury rather than strict numbers.

When you are hit for a certain amount of damage, you roll to withstand the blow (a “soak roll”). If you don’t match the damage total, you lose a “body level” on this scale:

Small characters/creatures have fewer of these levels. Big ones get more of them.
Sometimes attacks can knock more body levels down.
PC actions are affected adversely by those different states of injury.

And wounds are real. You roll to determine recovery time in days:

For a game that moves by seasons of the year between sessions, these periods of recovery make sense.

Critical failures on rolls to heal mean that your character has some debility resulting from an injury that never really healed. You can even die during recovery (infection)!

You could regard this as numbers hidden behind descriptions: 5 strikes and you’re out. But each level matters differently and has descriptive character rather than numerical character.

There are other games out there that have emulated or modified this.

I like the Stress and Consequences from FATE, and that character death is off the table most of the time since there are way more interesting and dramatic ways to handle losing a conflict. Also a cool idea that I haven’t tried yet is their idea to abstract wealth into it’s own ‘HP’ or Stress and Consequences track, and makes me wonder what other things can do this, like Reputations or Honour.

I like the way Fate Condensed handles this, too. Although I appreciate the “checkmark or bubble in this box” style of marking health, I have come to prefer writing and erasing numbers better. Mainly because it’s easier to implement in an online PDF or Google spreadsheet, rather than a paper character sheet.

Clocks in Blades in the Dark are very similar to the Fate stress track, in that you are encouraged to use them to track impending consequences (time before the authorities show up, the fire consumes the building, etc.). The clocks can also stand in for enemy health, although you’re encouraged to frame it as “time for overcoming this obstacle,” even when the obstacle is just a couple of goons trying to rough you up. In my opinion, it’s also acceptable to write these clocks as fractions – 0/4, 1/4, 2/4 – when that’s easier to draw or type vs. a picture of a circle with lines through it.

I’m quite pleased with the harm system in Defying Danger.

Harm rolls are always 3 x d6, keeping the highest, middle, or lowest die. You adjust that number up or down based on size difference (a large monster deals +1 damage to a human-sized foe; a human-sized PC does -1 damage to a large foe) and force parity (+1 for outnumbering your foe, -1 if they outnumber you; +2 if you can swarm them; -2 if they can swarm you).

When PCs suffer harm, they use this procedure: 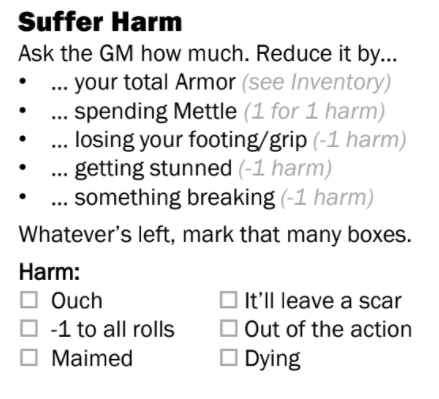 (Mettle is the Warrior class’s expendable resource. It can also be spent to increase a roll, or for character-specific benefits. A Rogue has Cunning that can do much the same thing. Wizards have Power, but can’t spend it to reduce harm… they have magical protection as one of their gear options instead.)

Monster attacks can have tags like forceful that mean the damage typically knocks you down, sends you flying, breaks, stuff, etc.

So if I’m a Warrior with 2 Armor, and I get walloped by an ogre that deals best-of-3d6 forceful damage (+1 for size), I’m likely to take, oh, let’s say 5 damage and get sent flying. My Armor drops that to 3 damage, and I might choose to spend 1 Mettle and lose my grip on my weapon, reducing that to 1 damage. I mark “[x] Ouch.”

I dust myself off, draw my backup weapon, and rush in again, but I biff my roll, and get smashed again. This time, the GM rolls 7 damage and they described the attack as an overhand smash, so I’m definitely losing my footing. Armor drops that 5 damage, I spend 1 more Mettle to bring that down to 4, and say that my shield breaks to reduce it to 3. I have to mark 3 more boxes, so I mark “[x] -1 to all rolls” and “[x] it’ll leave a scar” and… crap, now what? I could reduce that harm by 1 and be stunned. I could marked “[x] maimed” (broken arm?) but keep fighting. I could mark “[x] Dying” (fractured skull?) but somehow stay in the action. Or I could mark “[x] Out of the action.” If I’ve got friends nearby, maybe being stunned or out of the action is the right choice? Otherwise, I’m probably going to keep fighting for now with that broken arm.

Point is, big damage is scary, but armor helps and you’ve got a combination of metacurrency and fictionally interesting ways to mitigate it. When it starts to get real bad, you’ve got interesting decisions to make. And even if the foe is relatively weak (dealing the lowest of 3d6 harm) there’s still a chance that they roll high and cause you some serious trouble.