What's the simplest and most impactful "plug-in" for a system without travel mechanics?

I’m working on my own system, and I want a light, juicy system that offers a bit of depth to travelling.

I don’t necessarily want specific encounters, but rather a “meta-rule” to what kind of encounters to throw and when, or even what level of flavour to describe and when.

Or, heuristics as to how I might run “in-between” spaces. Electric Bastionland suggests putting two options “in opposite directions, making each complicated”. That alone could be inspiration enough, though obviously it’d have to be used sparingly.

So if you were to just jam an exploration “subsystem” into a lite RPG, or into your own GMing, which one would it be?

Not the simplest, admittedly, but the goals you’re describing are part of what I had in mind when I wrote Follow the Bones. In particular, I think you could adapt the two-dice spark method to generate all sorts of encounters. Changing the spark adjectives would let you adapt the method to your specific setting. I’ve added a few community copies, so feel free to grab one of those if you’d like to check it out.

I still lean into Encounter Tables (generally by Region, sometimes with Seasonality as well) as the primary procedure to add some excitement to journeys through the Wilderness. They can make an environment “come alive” and nearly always result in choices. Lately though, I’ve been doing them a slightly different way that does factor in some additional context: 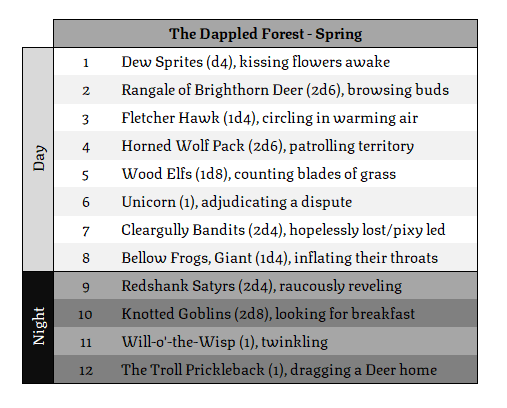 This table provides me with a bit of versatility. I have Day/Night Encounters (because some things are just more interesting to portray at the appropriate times (like the Wisp at Night…) should I need to generate these separately, but what I’ve been doing lately is just adding the number of elapsed Watches to a die and having it “grow” as the day progresses. This means the early Morning things “fall off the table” as we get closer to Nightfall.

Having a little bit of context for “what the Encounter is doing” is usually helpful for me as well (though I do go rather overboard with my various d100 Encounter Activity tables), these often focus a bit more on creating interesting situations to create engagement rather than just “Combat” as a foregone conclusion, and assigning them Miens or using Reaction Rolls really helps add another layer at my tables when it comes to portrayal. Some also generate environment and mystery which can be useful. I didn’t follow any hard and fast rules for them, but I’m sure there are patterns that emerge: Juxtapose two Encounters to create Choices (wait and see who wins, ally with one or the other, etc.), Place the Being in an unusual Situation (sometimes requiring assistance/intervention, giving them a driver/motivation), or using the Encounter to hint at a Wider World or evoke Wonder. A lot of my Wilderness Hexes work towards this too. Exploration isn’t really exploration without something to discover

and Travel itself needs to have plenty of “baked in” choices/decision points and that sense of revelation to make itself memorable I’ve found.

I like to largely narrate travel, but still have some chance of major events along the way. My simple system for this is:

Now, at the start of the journey, I know where an event will happen and what it will be, so my narration up to that point can give hints and clues, then I can have the actual event happen and the party has to cope.

Minor events do not actually block passage, they just offer diversions or delays. Major events have to be dealt with to continue.

Generally, the longer the journey the more major the event. So, if the party is going to make a 1-month trip east, the major event will be very major. If they’re just traveling 6 hours north to a dungeon, the events will be much smaller.

I don’t recommend more events on longer journeys. That just makes the travel part of the game drag on. The point is to figure out when and where the most impactful events of the journey happen and only play out those bits actively.

Because there’s a chance of chained events every time, the players do have to conserve resources somewhat, because they don’t know if there’s about to be a more significant event the instant they finish an encounter.

I should note that I treat “travel” and “exploration” as completely distinct. Travel is going along a known route to a known destination, which I prefer to narrate with only one or two events happening to derail it. Exploration is a much slower and more complex activity.