I am working on my own fantasy thing right now, inspired by the “Happy OSR” thread. Currently tackling species/ancestries. I try to avoid specific, detailed ones but do want it to be somewhat relevant. I am considering doing groups of related folk that would share some similar traits. Are there games you know that do this already? What do you think of this approach? Do the groupings make sense?

I suspect many systems imply these groupings but don’t often spell it out this way…which is why I feel the groupings vibe instinctively. 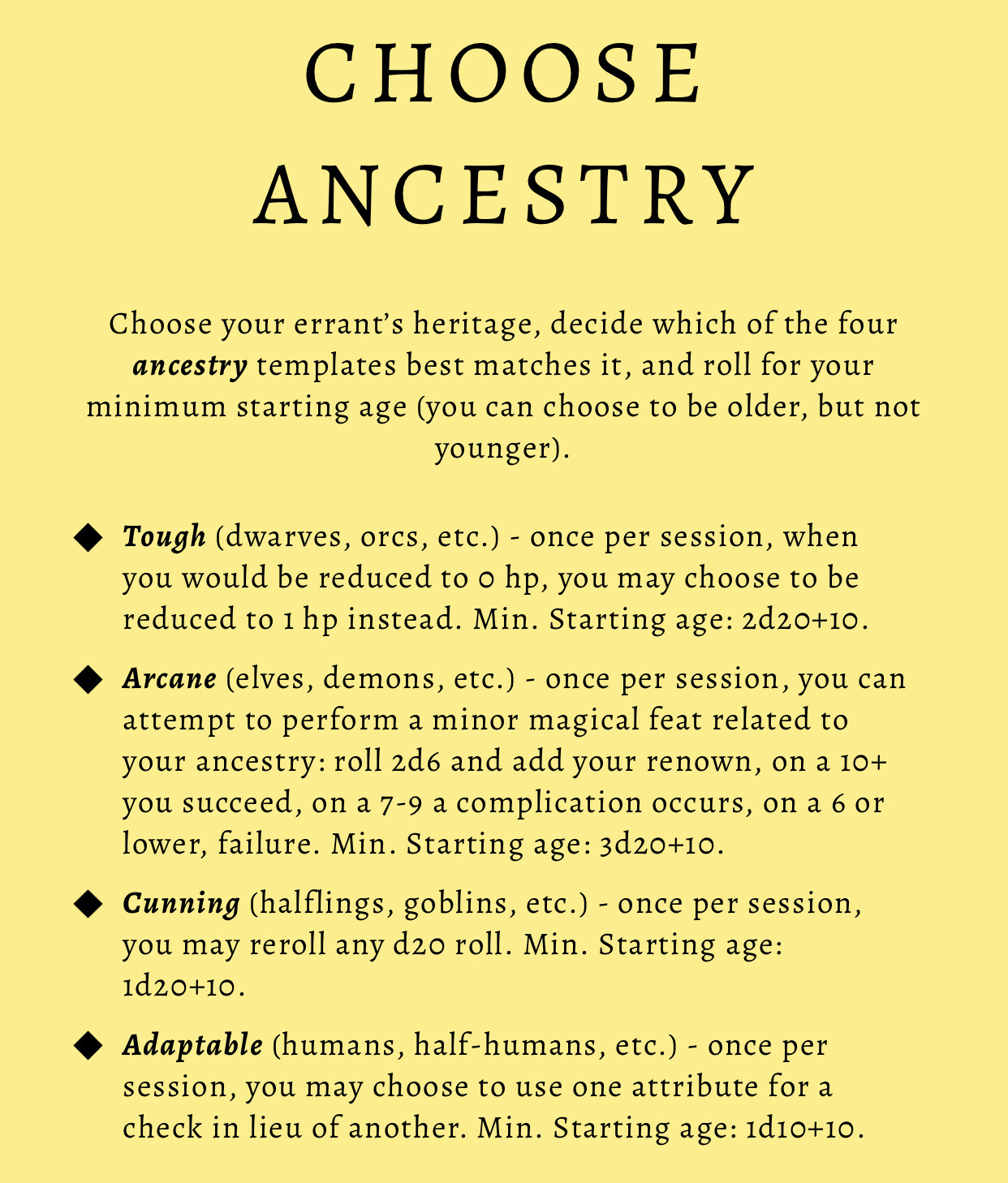 Interesting. A totally different way of grouping it. Thank you.

Hmm, what themes vibes are you aiming for, feels a bit like trying to make a big melting pot of fantasy (which ain’t bad mind you). But if you are aiming for and everything and everything approach, it might be useful to simply balk broad categorization entirely and simply have each one give one/two single listed tags or thingies.

I feel like goblins are part of the Fae, but don’t let that stop you if it’s different for your your setting. It’s a cool idea. I’ve been thinking along these lines for my own Dreamlands as well.

Thanks all. Theme Vibe is “everything goes, colourful fantasy”, my take on what “Happy OSR” could look like.

It’s not so much a specific setting and more a ruleset/toolbox for people to get a framework and then create their own world around that. That’s why I don’t want specific Ancestries but broader categories so people can make what they want. Each category then should have 2 or 3 special abilities listed to choose from. I am trying to stay away from personal attributes from Ancestry. I do like the approach Errant is taking too though.

This is a cool exercise!
I personally would not categorize Halflings as “Elder Folk.” To me they are always far too homey and down-to-earth to be classified alongside Elves in such a group. Perhaps instead there is a category of “Small Folk” including Halfings, Dwarves, and Gnomes, and then Elves go elsewhere? Obviously, of course, it’s a question of taste, and you may like the categories as-is!

I was thinking all this about while building Genesys characters using their fantasy setting. I feel like I don’t even need to read this stuff any more.

Is there a chance to lean on these groupings to create new and interesting ways to look at these characters? Like, if you put tall frail magical Elves in the same category as stumpy stocky stoic dwarves, is there a chance to find the beautiful common ground there that’s something we haven’t seen before?

Maybe I’m thinking too orthogonal to the original question, which is totally fine, but it seems like a really good opportunity to me!

I think it depends on where you want the root of useful differentiation to flow from. In biology, we call have taxonomic ranks to differentiate groups of like-things. So these groupings could be the higher level ones that we can then build smaller groups within.

I mean Errant specifically list categories “Tough”, “Arcane” etc. There’s no reason that these sorts of archetypes need to apply to specific fantasy races. Like if you want your “dwarves” to be something other then burly tough guys, just give them a different adjective. Heck don’t even use the Tolkien races, don’t even link archetype to species or race at all? Tough hole people can be in the same party as cunning hole people. Reducing species or culture to a set of mechanical bonuses is always going to be a bit of a squicky thing anyway.

Like if you want your “dwarves” to be something other then burly tough guys, just give them a different adjective.

I agree with this conceptually, but it says in-text that dwarves are in the tough category. Without going too deep into the “author is absent” argument, the reality is that I can already make those changes, I’m asking for mechanical sets to explore them in interesting ways.

Hmm. I read the parantheticals as a sort of general list of examples, and the inclusion of dwarf and elf as references for players mired in vernacular fantasy tropes.

I wonder if this different reading is because I am more familar with Errant as part of a Classic/OSR tradition and as a game without baked in setting? A general system for playing in referee designed worlds or adapting 3rd party adventures to.

Were it a more narrative style game/setting/adventure I suspect I would have read it as “of course there are tough dwarves and all dwarves are tough in this game”. My own conception of Errant’s implied setting is that it’s full of bird people and that Goose and Swan people tend to be tough - but I suspect this is my own jokes about and art contributions to the game talking.

Not sure that this point regarding play style, open/closed setting design beeing split between general and specific systems tracks or if it just raises the spectre that implied setting is inescapable. I will need to contemplate it.

These are all great thoughts and exactly the kind of thing I am struggling with. That’s why I chose these overarching groups to basically circumvent this perception. But I am struggling to make it work, don’t have a good idea yet. The Errant distinction makes totally mechanical sense but then also feels a bit bland and I would love something more flavourful. It’s harder then I thought.

Hmm, I think generics like dwarves and elves have a lot of room for variation, but most of the variation is in dressing, but at some point if you start straying from the core you end up with other things, which is great! Just means you don’t for all practical purposes, have a dwarf anymore.

You do have a lot of room for variation tho, love when people take non-standard approaches.