[Blog Post] Some ways I think about TTRPG design

You’re welcome to read it on my blog, or below where I have reproduced the text and images. 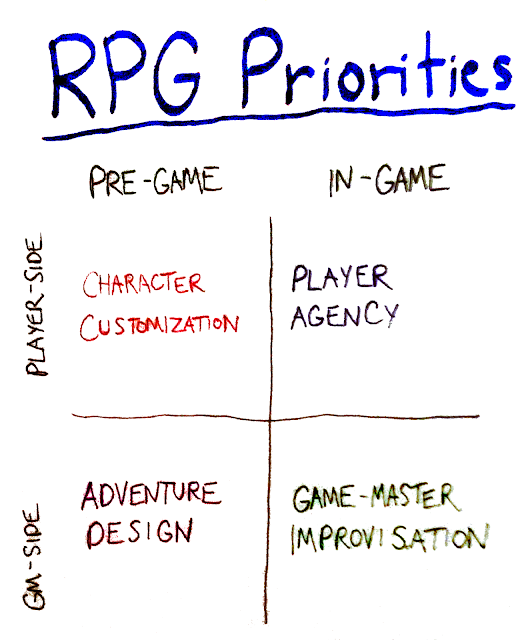 I came up with the chart above some time ago. Originally, I tried to rate individual games’ focus on each quadrant on a scale of 1 to 5, but that method arbitrarily relies on comparisons to pre-existing games. Who is to say which game represents a “5 out of 5” focus on Player Agency?

Anyway, I still think it’s a worthwhile way of thinking about different games in the TTRPG space and what their priorities are.

I tend to view Player Agency in terms of Information-Choice-Impact. How much information are the players given, how free are they to make choices based on that information, and how impactful are those choices in the moment-to-moment gameplay or in the overall scenario? If the answer is “lots of information, very free, and very impactful,” the game in question has high Player Agency.

I imagine you can extrapolate analyses of various games from here based on this framework. It could make for good design prompts, too. What would it mean to take a game that has no focus on Character Customization, for example, and shift it in that direction?

If we rephrase “funny constraints” as “toys,” “fake problems” as “danger,” and solving the problems as a “goal,” we can say that a game = toys + goals + danger.

Danger can take a number of forms. I tried to list the main categories of danger in games (including videogames) in the note below. I’m sure some of you can think of more. 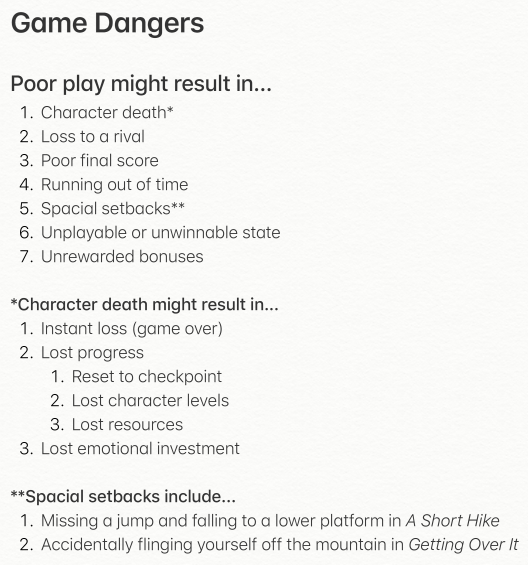 For TTRPG designers, one key thing to recognize is that the toys, goals, and dangers might come from the Adventure Design or the logic of the setting rather than from the system itself. (FKR types might call this “playing the world, not the rules,” and I think that’s fine, but I think “world” slightly obscures the nature of the adventure/setting as a designed thing.)

Even in D&D 5E, the dungeon map is not a “rule,” it’s part of the Adventure Design, but the shapes of its rooms and corridors still represent a “danger” or constraint. There are no rules that describe what the players’ goals ought to be, only the vague suggestion that surviving combats is necessary to level up.

That said, most of the “toys” to which 5E PCs have access are rules-derived: abilites they select during Character Customization, magic items that reference the combat and task resolution systems, etc. The Arcanum/Oddities in ItO/EB are examples of toys that flow from the logic of the setting and generally strive to avoid referencing rules.

If you frequent the NSR Discord server or the Cauldron, you probably already know that it’s possible to run games where the toys, goals, and dangers come almost entirely from the adventure and the setting, but there are perfectly valid reasons to present rules-derived toys/goals/dangers as well.

We like to indulge in the illusion of continuous space when we play RPGs, but PCs rather seem to “jump cut” between discrete points or scenes. (Text adventure games like Colossal Cave Adventure and Zork figured this out a long time ago.)

The party is standing in Room A. The GM asks, “So, you’re going to Room B?” No one objects. “Okay, you enter Room B.” Nobody bothers asking where each character is standing in the room unless it becomes relevant for combat or a trap.

It’s part of the grain of the medium. It’s too much mental effort to track exact position at all times, so we imagine things in terms of binaries: “Is Character X in Room A? Yes or no?” So long as individual rooms aren’t too big, exact position doesn’t matter, because a character can reasonably walk to any point in the room in a matter of seconds. That’s why the dungeoncrawl is such a winning formula.

But scenes don’t have to be literal rooms connected on a map. As far as I can tell, there are three ways to connect scenes:

I call these three methods “linear,” “linking,” and “leading” in my notes, but they aren’t perfect descriptors–I just like the alliteration.

You can probably already tell I have OD&D’s dungeoncrawl procedures in mind. The players should press on to collect more treasure and level up faster; if they return to safety, the dungeon will be restocked with new monsters (a form of lost progress). And yet, they only have so much HP and magic to work with–if they get too greedy, they’re going to get killed.

The Dark Souls series famously adapts this same loop to videogames, with the major difference being that players collect “souls” from slain monsters rather than treasure.

I think sanity/morality/corruption meters, as seen in Call of Cthulhu , Vampire , Weird North , etc., are also a form of push and pull. The players should press forward because that’s how they solve the mystery or complete the mission, but there’s always the risk that their meter bottoms out and they lose their character.

There are probably other examples I haven’t thought of, and new takes on the basic “push and pull” formula that have yet to be invented. It seems to me like a good formula to add some spice and drama to a game.

There are some big-picture questions that, at least in my experience, can get lost once you’re in the design weeds.

Who is this game for, and under what conditions? How many players are there? (Why not one player, or why not twenty?) How many GMs are there? How long are they playing at a time, and how often?

How many characters are the players expected to control at one time? Why are they controlling characters at all–why not organizations or leaders thereof, like in an open strategy game or Model UN?

What are you really trying to do with this project, and why?

So often, we chase our images of how RPGs are “supposed” to be, instead of exploring what an RPG could be. Meanwhile, the space of possibilities is enormous.

Some vague and disorganized thoughts:

I’m not sure I see what you’re trying to say with some of those contrasts, but I’m glad to get you thinking!