The current world/game I’ve been pondering is a bash of my favorite things from the Dieselpunk genre, MtG’s Kaladesh, the Bioshock video game series, Scythe the board game, and the Leviathan novel trilogy.

I’m also thinking about toning down the war themes of the Dieselpunk genre, to the point that I’m considering removing war as a factor altogether. As well, I’ve been interested in community building in RPGs recently. So, I’m considering adding that on top of it, with the PCs being part of a colony or something.

Some other themes I want to play with:

The game would be set in a frontier colony where the PCs act as important figures within the colony (but not necessarily in charge, either). A distant totalitarian government taxes and orders from afar while discontent breeds among colonists. On the other hand, the game will largely be centered around the community that the PCs foster and the bond that forms between them. I’m going for “Hopeful Dystopia” in vibe, in that there is a Dystopia, but it is in the background and getting better.

The system itself I’m not entirely sure about, although I’ll definitely be taking inspiration from Holdfast Station for session 0 worldbuilding.

On the narrative side, thoughts? On the mechanical side, any suggestions on how to represent a community in a relatively freeform way?

Just so I am clear “Dieselpunk” is mostly about aesthetics? I assume it’s about the look and the feel and the technology level. BUT it’s not about rising up against the man/society. Or at least that is what I gather from the themes you’ve mentioned so far. Is this correct?

As far as community representation in a game, I think if you are going for a more community network building type thing you might want to think about:

To me, these things could all be pretty loose. They might not be more than a few words on an index card or two. But I think just identifying and saying those things aloud/writing them down could go a long way to developing the community.

I second the confusion as to what Dieselpunk is in the first place.

Wikipedia says it has to do with the period between WWI to 1950, and wow, it’s hard to think of a period of forty years with a more diverse range of ideas and aesthetics to pull from.

World War I? The Roaring Twenties? The Great Depression? World War II? Those all feel like very different settings to me.

So, maybe you could clarify what interested you in Dieselpunk in the first place and what influences you’re pulling from?

As I get it, @SageDaMage isn’t seeking to be adhering to the textbook definition of Dieselpunk. Though not knowing much of the references they make I wouldn’t know much about it.

I think most x-punk genres are about sticking it to the man. Dystopian society is the bad guy. You’re probably not gonna win, but only sabotage. It’s “Driving your character/game like it’s a broken car”, as in the end is probably losing against the man. But Sage seems to be wanting to dial that back, having a hopeful dystopia. It’s improving already, even without the PC’s involvement. It’s not the drive of the story. Being important in the society already means you’re not outcasts of society trying to make it in a system that rejects them.

The Diesel part I don’t exactly understand either. I think that’s esthetics, but I’m not sure. It feels like it would be rust, barrels, barbed wire and concrete. But I dunno.

I have since scrolled further down in the Wikipedia article and apparently there are two predominant flavors: (A) World-War-punk and (B) Art-Deco-punk. The former reminds me of Wolfenstein: The New Order and the latter of BioShock.

One theme, named “Piecraftian” after its proponent author “Piecraft”, focuses on the aesthetics of the world wars and speculates on how human culture could theoretically cease to evolve due to constant, widespread warfare. According to Ottens and Piecraft, this theme continues the aesthetics of the diesel era into later periods of history by describing a world where survival (largely based on a reliance on diesel power) is placed above aesthetical evolution (as seen in such dystopian movies as Mad Max ).

A second theme, named “Ottensian” after its proponent author Nick Ottens, focuses on a setting where the decadent aesthetics and utopian philosophies of the American Roaring Twenties continued to evolve unhindered by war or economic collapse. Ottensian dieselpunk fiction is primarily concerned with a positive vision of technology, where the utopian ideals predicted by the World’s Fairs of the times came to light. As a result Ottensian dieselpunk incorporates “an enthusiasm for the predictions about the future,” and often shares elements with retro-futurism.

I can’t wait for my grandchildren to develop the Pandemicpunk genre, an alternate history in which the 2020s pandemic lasted in perpetuity and everyone kept using smartphones forever instead of whatever metaverse B.S. will be around in 2071.

Im pretty sure dieslpunk is just an aesthetic that vaguely means ‘ww1-ww2 wish’ diesel technologies, its incredibly vague and could theoretically cover a roaring twenties mobster story if it had Art Deco flying cars powered by diesel. Or a ww1 trench story but with giant mecha. Its pretty much just a ‘heres a vague idea of the aesthetics I’m going for’ term. Bout as useful as a genre term pretty much. Like saying your writing urban fantasy.

Ye Wolfenstein is a pretty classic example. Another thing that deiselpunk makes me think of is old mega projects like Atlantropa. It is again, a pretty ill defined aesthetic.

Oh an excellent example is the illustrations from the Leviathan book trilogy. 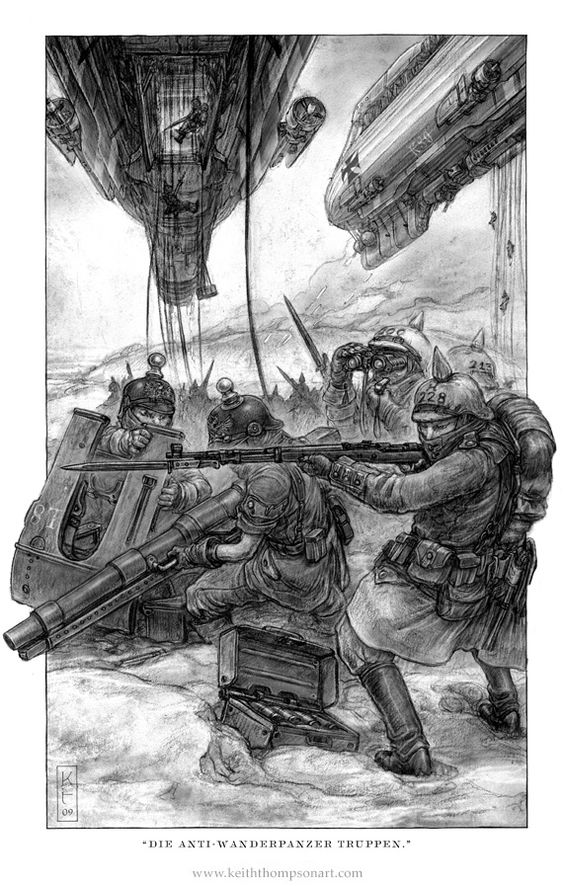 That’s correct, yeah. All “-punk” has some anti-establishment themes, and I’ll certainly be incorporating that, but not on the level of being rejects of society or anything.
As @flyrefi mentions, that being the two dominant flavors, I’m going for less Decopunk and more World-War-punk, at least in aesthetic. I think this Aesthetics Wiki page explains it well.
And yeah, @Cosmic-Orrery, the Leviathan art definitely was a huge inspiration. Actually, you can find a lot of Keith Thompson’s art at his website.

Okay, that explains a lot. So, the totalitarian government in the distance are like mecha-fascists. It makes sense in a dream-logic sort of way, but it might be difficult to make it feel like a real place.

If we’re in a WWII-ish era, I would assume we have the telegraph and radio, so it’ll be hard to make the dystopia feel “distant” in the way you might want.

Naw I think it’s workable, after all colonial holdings were still distant during the days of the world wars even with said radio and telegraph (also radio and telegraph of that time period are not actually that like, good, mind, especially if things are happening to disrupt telegraph). I might just have a more flexible, dream-logic like you said, based interpretation of it all though.

Theres also the fact that communication does not equal attention.

The best route might be to set things up a bit like a frontier, where the turmoils of the core have affected them bit by bit (soldiers, a new governor) but the core hasn’t yet turned its full attention to dealing with such fringes, focusing its iron fist on controlling its main core region.

Leviathan always struck me as closer to Steam then Dieselpunk in its ethos. It’s (if I remember correctly?) roughly about the pre-WW1 naval race between England and Prussia, but with flying whales and mecha?

I’m splitting genre hairs sure, but it strikes me that while the Steampunk Prussians or French might be portrayed as an evil empire, they are never really a fascist one, but rather at worst an absolute monarchy. This is why WW1 is such a break in genre. Steampunk still posits a basically traditionalist preindustrial social order – good kings, bad kings, home and colonial subjects within a fundamentally, but naturally anti-democratic order. The medieval Great Chain of Being still orders things, even is personal liberation (usually or being raised to the aristocratic or merchant class) is possible.

Deisel Punk, even pre-WWII has more room for the revolution, ideologies of mass liberation, and the collapse of the traditional order. I think this space (is it Steam or Diesel) becomes interesting in the settler context you mention in so far a the WWII era and before are also emeshed in colonial liberation struggles by the colonized. Post WWII is of course the age of colonial liberation. Anyway not sure if pinning down genre is useful but deciding if your characters’ are involved in the American Revolution or the Indochina War might be interesting.

Thats a good point Leviathan does lack that aspect of… modernity, that deiselpunk oft features!