If you are anything like me, you want to have games be different than other games. You might like to push the bounderies of what games can be about, and you just want to be silly from time to time. As such I thought we might make a thread where people could share their possible game ideas. It doesn’t need to be fancy or weird perse, it’s not a contest, but mine might be most of the time. I like the What if X but Y approach, and games that don’t have a themed system for it (like Risus, Roll for Shoes or Fate).

I had the idea for this post because my wife showed me a meme: 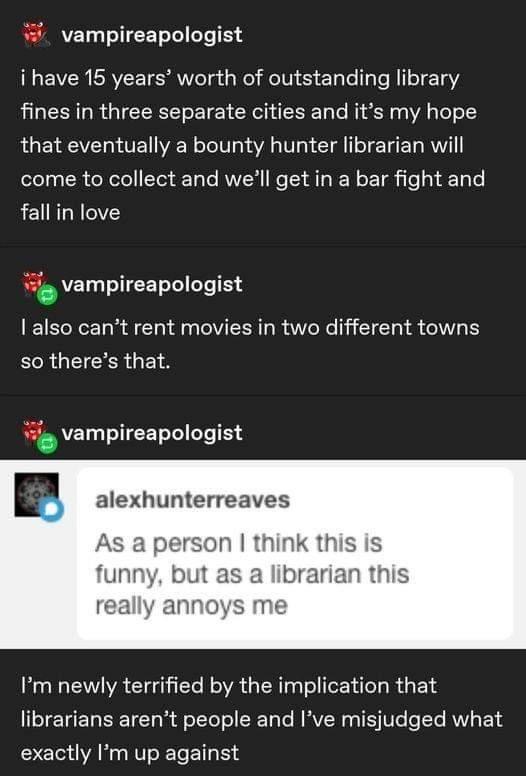 And I was like: This could be a game! Either you are people with library warrants trying to avoid bounty hunter librarians or you yourself are them!

Another idea I’ve had for a while was: Intergalactic Music Band, where you travel the galaxy playing your music and get into tricky situations. There are variations of this I would want to play or run. Intergalactic Rock Band was the first idea, but I would be into a very niche Intergalactic Klezmer Band as well. Or even an Intergalactic Marching Band

What are your weird game concepts you’d want to try one time?

I was trying to keep this a secret because talking about my ideas online sometimes feels like committing to them… But, oh well, someone has to get this thread rolling.

You know how The Princess Bride is set in a fictional country with magic and monsters in places, but the country is in real-world Renaissance Europe? Like that.

I’m thinking of making it an island because I’m interested in the “island hexcrawl” format of the Isle of Dread / Hot Springs Island / Neverland.

The ideas so far are:

There’s also Utopia, if you’re looking for inspiration. It was technically off the coast of South America, and More wrote it in the 16th century, but you gotta figure it was there before he found out about it.

Yes! I’ve also been playing with the idea (and had started playing, before life became crazy hectic) of playing in 15th century Burgundy (My last name, Bourguignon, litterally means this, and my family on dad’s side like to claim that we’re direct descendents of the Burgundy nobles. Also, living in Belgium, I live in what used to be a part of the lands owned by the Burgundian courts.)

I just remembered the video’s OSP made for the Pope Fights, and that seems as a great backdrop for a historic game, either being just stuck in it, being a mercenary band (or commander of one for a miniatures type of game) involved in these or for a top level Diplomacy style game of Intrigue (or a Fiasco Hack?) this seems like an interesting backdrop.

For those who don’t know them, watch them here:

One kinda game I want to run at some point is a game that lasts over generations. For every third session or so, the players advance to a new generation and make a character of their previous character offspring or related family. That and add a layer of domain play, and you have something like tabletop Crusader Kings.

Undercover angels infiltrating Hell for some purpose. Obviously being angels they can’t lie, so if someone asks you directly if you’re an undercover angel you have to say yes.

I love Papal history and how messy it is

I need to play test my current Crystal Frontier adventures for the next book:

The Tower of Flints - a crumbling lighthouse and shrine to the Imperial Saint of Doomed Sailors. Now a point of conflict and tense cooperation between pirate/smugglers and depraved owl worshipers. Faction based hijnx.

Both are too low level for my current home game - and anyway I want to run them for folks unfamiliar with the Classic dungeon crawl play style - even if that means running them in OSE. I should maybe do this next week and recruit from here?

The NSR discord might get you more “hits” than here, but I don’t know that for sure!

The thing I want to run next is a slow-paced, wandering game about a long-term migration, which would be played as a PbP game where IRL time and game time are synced. The setting I’m thinking is very low tech, maybe near-Neolithic, but in the far distant future. Since IRL/game time would be synced seasons would pass as they do in the ‘real’ world, and you could play out a multi-year migration. I think it would take advantage of the slow-moving, but very long term nature of PbP games. It also syncs with my love for highly observational, very quiet games. (posted about this on NSR a little while back)

I recently read a roleplaying guide to the 19th century Philippines, so I want to use that. Dunno what game to use though. I’ll think of it more concretely later on, but right now I’m stuck with editing my setting and plans to playtest Mangayaw.

I love/hate pbp, and love seeing games being made with it’s strenghts and weaknesses in mind!

I’m reading through the Harry Potter books at the moment (currently on Goblet of Fire) and was struck by the idea of a “Rosencrantz and Guildenstern are dead” type game set in Hogwards.

Perhaps you are students constantly missing all the action and having your own kind of things going on, or perhaps you’re house elves, just doing your thing, working in the kitchens etc.

Have you looked at Pariah? It ticks a lot of those boxes, and could, I believe, be adapted pretty easily to tick the others as well.

@SymbolicCity yes! totally agree - love Pariah, and definitely will draw from it. I’m also hoping to use some material from those excellent hex generators that Alone in the Labyrinth has been posting

@TheBeardedBelgian I hear you re:love/hate for PbP. It’s become my main form of playing rpgs these days - but it’s definitely it own kind of thing. And that’s exactly it, I was thinking about how to take advantage of the very long time frames involved, while integrating/working around the generally slow pace of posting and giving me, as the ref, an excuse to post everyday and continuing having my lonely ref fun (lol), even during a quiet spell on the player front. Plus, I just love the idea of a quiet observational game played along with the changing seasons.

Oh, another one of my more wacky ideas I want to try sometimes is Fantasy British Bake-Off.
The fun thing is that Fate has already made a sort of ruleset for a similar concept: Uranium Chef!

Basically my take, while it doesn’t need to be baking, but could be cooking in any style, is what if a cooking show was hosted in a magical or sci-fi world. Especially if you turn up the Anime! toggle like in Food Wars! (though I personally like to keep it less sexually charged).

Troika!'s “Blancmange and Thistle” adventure, but as Hotel Staff.