Justin Alexander (The Alexandrian) has been doing a let’s read of the Dragonlance modules on twitter recently, and I seem to get caught up in quixotic projects, so I’ve been reading them also and trying to figure out how I would try to salvage them to make an actually cool campaign out of them.

I hope it’s not too annoying, but I wanted to kind of think out loud here. I’m also interested in hearing what other people here have to say about the project and issues.

I’m aiming so far to use Dungeon World as a base, with a few modifications basically just to fit it into the world. I think the skeleton of the game would work great; much better for an epic quest campaign than any version of D&D or OSR game that I know of.

The modules are written such that they don’t provide a big picture of the campaign for the GM, which is really annoying if you’re trying to tear the rails up. I’m only partway through the fourth module, so I’m not ready to address the campaign fronts or setup that much yet. But there are some basic world assumptions that I have ideas about.

First, alignment. I can’t get behind the war between good and evil. Sure, the draconians stand in for fascists and genocidal invaders, but I think I can come up with a better way of handling that than labeling them “Alignment: Evil”, and mucking with the basic alignments can open up other opportunities as well.

Alignment serves a purpose in both the Dungeon World system and in the cosmology of the Dragonlance campaign (a different purpose in each), so I don’t want to just remove it. In the system, alignment moves function as flags for players to say “this is an important part of my character’s characterization” and they can earn a little XP by emphasizing it. In the campaign, there’s some kind of cosmic war going on that I don’t understand yet between the dragons and the gods.

My idea for resolving the alignment problem is to replace the (lawful, neutral, evil, etc.) alignments with:

Each of these alignments is then a category for alignment moves, just like the five standard alignments in Dungeon World. Individual characters would have their own alignment move based on their alignment and class. So a Questing Fighter might have a move like “Rescue someone from the horrors of this war”, while a Gods-aligned Thief might have like “Expose an agent of the dragonarmies”.

The campaign setup is “You’ve spent the last five years ostensibly searching for evidence that the gods have not truly died or abandoned the world”, so PCs would be strongly encouraged to start with Questing alignment.

I did some pretty in depth reviews of the first two Dragonlance modules back in the day, including a few ideas on how to imporve them. The things that are terrible about all Hickman adventures are terrible about Dragonlance: intense morality with hollow/cruel values of good, a lack of player choice, weird uncomfortable racialized factions, railroading with antagonistic refereeing to ensure the proper narrative.

Basically you could cut all that stuff away and you’re left with a decent world: distant gods returning slowly, dragon invasion, the destruction and dislocation of war – a high fantasy apocalypse.

there’s some specifics in here, but the main thing is run it as a sandbox with a scheduled or clock based dragon conquest thing and place the players in the middle of the situation instead of forcing them to be a certain kind of heroes. Maybe they want to murder elves and unicorns on behalf of the dragon powers? 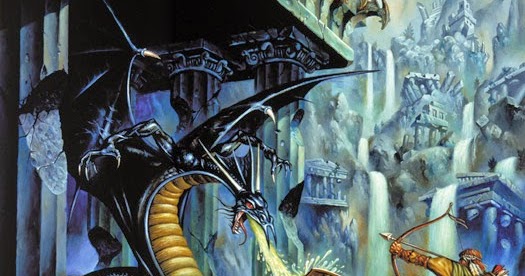 D ragonlance, much reviled, much mocked but secretly much adored.   Back when it was originally published I never read or played any of... 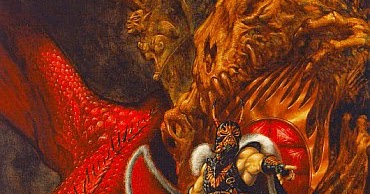 A while back I tried to give a fair review of Dragon’s of Despair; to express what I liked about the modules, to look at where it went ...

I have an enormous amount of nostalgia for DragonLance. I don’t have good answers for how to fix the racial stuff or the cosmology, though I think a lot of it can be easily purged if you aren’t using D&D 2e mechanics that mechanize some of the shittiness. One of my white whale campaigns is to run through all the DL modules in Trophy Gold. Trophy Gold is designed to remove the spacial exploration from dungeon modules and replaces them with thematic exploration. It removes a lot of the agency players have about deciding where to go next, what will the next scene look like etc… by giving each sub-section (called sets in the game) a fixed goal that can be either accomplished in fiction or by earning and spending a metacurrency. It also gives them a lot more agency over the world in each scene, both with successful rolls and by spending currency. It’s not a tradeoff I want to make for most classic/OSR/NSR style modules, but I think it’d be great for DragonLance, where by and large you don’t get to make a lot of choices about where you go next, or what happens next. It would also be helped, I think, by the increased narrative agency within each scene.

Anyway, it’s way more work than I have time for with my life as it currently exists, but one day…

Yeah, I think I’m aiming for something similar in terms of treating the dungeons as something closer to pointcrawls or collections of setpieces with Dungeon World. I get the impression that Trophy Gold is much more suited for playing refugees like GusL suggested, and I’m still aiming for something closer to the epic hero thing though. Also am trying to figure out how to make it more open-ended though, so trying to give players agency about how they deal with the invasion.

I do agree that playing with a (any) different system will probably help with some of the worst parts of the setting.

You’re right that as written PCs are lowlife treasure hunters in Trophy Gold, but they’re also mechanically very low heft, it isn’t hard to rewrite them as more heroic. But yeah, that hacking is part of the work I don’t have time to do.

I feel like the kind of adventure path play of the DL modules is tough in Dungeon World, because of the PbtA snowball and the kind of open choice it gives PCs. Curious to see how you handle that.

Thanks for those review links. So far I think I’m basically looking at what you said, but with DW’s fronts and impending dooms rather than a strictly clock-based situation advance. I would stick with the heroes fighting against the dragon army though. Not really into running a game for the fascist side…

Yeah, I assume working with the Dragons is a bad idea - they will turn on you. Though the elves and unicorn seem like they view everyone else as disposable as well, and some of the cities aren’t great either. For it to work well as a moral sandbox, Hickman’s moral structure would need to be toned down and grayed out some.

I tend to think one needs to offer players a chance to be evil jerks for the decision to be heroic to matter. This is the center of moral play, and something that DL could potentially do well - player moral decisions need to matter, they shouldn’t always be clear cut, and being bad often gives greater advantages in the short run.

That’s a specific sort of game though.