The Demon Tree, a folk tale

I wrote up a version of an old folktale. I hope someone finds it inspirational.

There was once a tree, and within lived a demon. It stretched itself over the Rab’s house, and often the Rab’s son would play nearby. One day the boy saw a finger poking out of the tree, and thinking that one of his friends was playing a trick on him, he fished a ring from his pocket and placed it on the finger. Suddenly a face appeared beneath the bark of the tree, a great smile upon it. He ran away from it, screaming.

The boy eventually forgot the event and grew up, himself becoming a Rab as well. He wed a respectable and wealthy woman, then settled into his father’s house. One day a branch from the tree slammed into his new bride, killing her instantly. Although the new Rab had not cared deeply for this woman, he still grieved for over a year before again agreeing to wed another woman of means. She too was struck by a branch from the tree and was killed instantly.

Finally the Rab decided that G-d must be punishing him for only wedding for social status and wealth. Thus he married a poor woman whom he loved very deeply, and they quickly made a life together. Knowing what had befallen his two earlier wives, the woman set herself to avoid the same fate. Eventually the tree did mean to strike her, but she was able to avoid its quick branches and declare, “Why do you do this? Why do you kill all who love my husband?”

The demon within tree then revealed itself and replied, “Because we were wed long ago, and he is mine under law.” The woman returned home and recounted the tale to her husband, who then recalled the events of his childhood and confirmed the demon’s story. Hearing this, she decided to go to the demon and treat with it.

The woman admitted that the demon was right: her husband belonged to the demon, as was law. A deal was then struck: the demon would abstain from harming her, provided that the woman brought it an offering each day of its favorite food: smoke captured in a pot. A deal was struck, and thereafter each morning the woman would return to the tree and find a pot resting there. She would light a piece of wood within it and close the pot. And so it went.

A few years later the wife became pregnant. Knowing that the demon would likely harm her child, or worse claim it as its own, the woman returned once more to treat with the demon. A new deal was struck: in exchange for her family’s safety, the demon could have her husband every Saturday for one hour.

And so it went for seven years. The child was healthy and the family happy. The demon wife even came to the family’s aid at times. One Saturday evening when the husband came to the demon’s tree he found the pot sitting there before it. Within was a familiar gold ring, and he knew that now the demon was gone.

9 Likes
Maximum Recursion Depth Campaign Retrospective up to Present
The Parable of The Chef and The Server
goobernuts September 26, 2021, 6:38am #2

That was a fun read! Reminds me of Philippine legends and folklore, because a number of them are about people being stolen away from their families to be wed with spirits, mermaids, or witches.

Aw that’s a surprisingly sweet tale, glad they worked out an arrangement among themselves at the end <3

Jewish folktales having to do with Demons are interesting in this way; often the law is brought in to adjudicate the situation. Frequently the judge or whatever arrives at a solution in favor of the demon!

Here is another example from Jewish Magic and Superstition, by Joshua Trachtenberg, (1939). 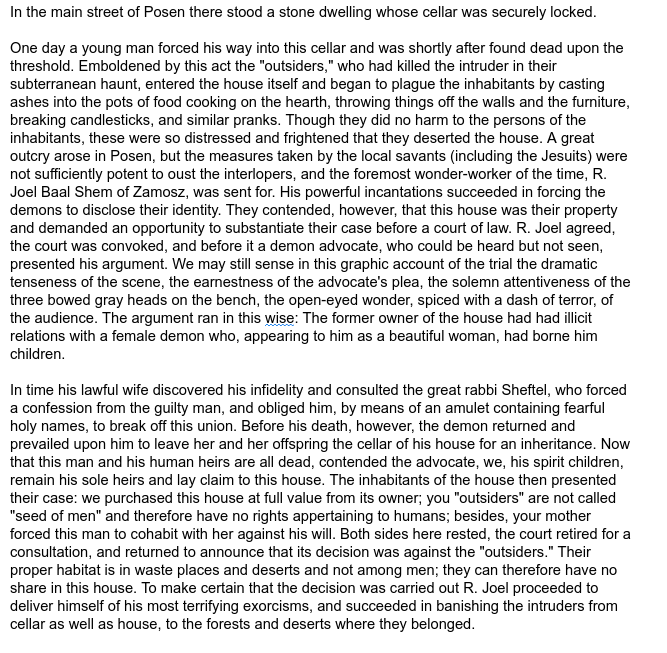 Hah! Bringing demons to court, what a world. In an anthology of Philippine legends I read, there was a story about some person surviving an attack by an Aswang (which are like shapeshifting flesheating witches). The person found out the one who attacked them was in their own town. The Aswang was confronted and forced to never do sorcery again, or else they will be brought to the local government. I find it really amusing that even the supernatural follow the concept of human law and government.

I was also raised Jewish, but at least in my experience, I think it’s a shame how the version of Judaism that I was taught, and the culture and mythology, was a very watered down and uninspired take. It’s a shame, because Judaism is such an old religion that has evolved so much over time, and there are all of these interesting legends throughout literally the entire history/prehistory of humanity, and yet I actually know so few of them or the ones I know I learned incidentally or learned a “Disney-fied” version of them (or so it feels).

Again, this is not to speak to the experience of all Jewish people by any means, just my own experience, but it’s interesting to read about various aspects of the mythology or folktales that I was not exposed to when I was brought up in it.

Yes, they are many different experiences. I was raised as a middle-eastern Jew with close ties to my grandparents and father (who is very much of a different “time” himself). I think having Argentine, Russian, and middle-eastern heritage (all Jewish) as opposed to the classic “Jew from NY” background might also be part of it. It does seem to me that most of the Jews I meet in the US have a somewhat muddled relationship with their heritage, perhaps as a result of decades of assimilation.

My father has no schooling beyond 12 years old and was raised on a commune by immigrants and survivors. His father worked coal mines as a child, read One Thousand and One Nights in Arabic and told the stories to my father, who told them to me. My great-grandmother survived the starvation of Argentine Jewish farmers, lived well into her later decades and told my father stories from her Yiddish-only childhood.

The stories he has passed to me are different than those of the people I’ve met since moving to the US, and I hope to pass them onto my child, when he’s ready.

I find a certain charm to the New York Jewish experience in itself actually, it sort of has its own mythology at this point, haha, but unfortunately, mine was of the Detroit experience, which I find significantly less charming.

Oh certainly. It’s just very common and “overdone” in American media, making it normal. Not a bad thing, of course.

Hey there is a whole Jewish Midwest thing with some merit, like the Coen brothers film A Serious Man. There are things to explore there (including Dybbuks, and the Goy’s Teeth).

I actually hate the Book of Job with a passion haha but that was a good movie. Are the Coen brothers from the midwest? Actually, I guess that would make a lot of sense. And I begrudgingly must acknowledge that that is where I am from as well haha.

Ya, growing up, I had somewhat of a concept of Ashkenazi vs. Sephardic vs. Mizrahi, etc., and we actually had some Ethiopian Jews in our community as well, but in the midwest, everything gets so homogenized, that we may all look diverse, but it really is the melting pot for better and worse. Whereas in New York, anecdotally at least, and not just speaking about Jews specifically, the diversity is more real and palpable here, even if there are ways in which New York also develops its own flavor- but it is its own flavor, not artificial vanilla #223 lol.

Yeah I also dislike that particular story, but so does the movie. The Coen Brothers are from Minnesota. You may be interested in the book How The Jews Became White By Karen Brodkin.

Ya that makes sense that they’re from Minnesota, and also it’s been a while since I saw the movie, I remember thinking it seemed ambiguous whether or not they agreed with the message of the story but regardless, it was nuanced enough for me to appreciate it. My reading list is sooo long, it took me nearly a year to get through all of Confucianism and I just started Don Quixote lol, but I will keep this book in mind, thanks!

At risk of veering too far from the original point of this post which is Yochai Gal’s excellent writing, but I asked him about this additional digression about Jewish Identity in a DM on discord and he said I should share it.

This is a small part from a blog post I’m drafting, but I actually refer to this very thread in the post:

Ultimately, I gave them what they wanted, a successful coup of this organization, but I framed it within the context of a Parable, or just as well a Fable- it was ok that they did something implausible, because the Parable becomes something of greater metaphysical weight, greater than the material act of what they’d done. You could almost think of it like “The Law of Surprises”, the metaphysical phenomenon that may or may not have real power within the setting of The Witcher and which ends up driving the narrative (as opposed to the short stories it started in).

On The Cauldron, we were discussing Jewish Fables, and I was raised Jewish, and I actually was in a very roundabout way inspired by Jewish fables with this session myself. Unfortunately, I cannot remember where I first heard this perspective, I want to say it was an article on cracked.com by the author John Gladstone who has long since moved on from cracked, and also I could be misremembering anyway. Regardless, they were discussing the scene in Coming to America, the Eddie Murphy movie of all things, where Eddie Murphy plays an old Jewish guy. The old Jewish guy tells a story about going to a restaurant and ordering a soup, and the waiter brings the soup, and he asks the waiter to taste the soup, and the waiter refuses. He asks repeatedly, the waiter uncomfortably repeatedly denies, but when the old man does not relent, finally he does. Looking down at the soup and at the table, he then says “there’s no spoon”, to which the old Jewish guy says, “achaa!”. I really like that anecdote. It’s been a long time since I read that article or saw that movie, I could be misremembering the particulars, but regardless, this version of it from my memory works for my purposes.

So that was also part of what inspired this turn of events. Even though this game is nominally about Buddhism and the interplay between Buddhism, Taoism, Confucianism, and Chinese Mythology (really as just a metaphor or lens for modern issues), I try where possible to use my own lived experience as a person of Jewish descent or as an American or whatever to inform the game and setting, because my experience is not that of a Buddhist or Taoist in China circa the 16th Century when Journey to the West was written.

Also, Yochai Gal found a good clip on youtube of the scene from Coming to America that I was referencing: 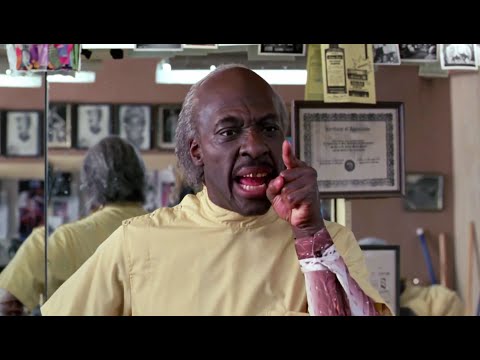 And since he did that, I thought I should not be lazy and find the Gladstone article I was referring to and I did, although I have not reread it yet!

3 Reasons There Are So Many Jews In Comedy

I had to admit I didn't have a more satisfying response. I simply didn't know why there were there so many Jews in comedy. My Hebrew school certainly didn't offer credits in stand-up, although I have to admit my Bar Mitzvah speech totally killed.