Recently several of us in the NSR Discord community started working through the Ray Otus’s very cool zine, The Gygax 75 Challenge. The challenge is based on an old article by Gary Gygax about how to create a setting and get it ready for actual play with your home group in roughly 5 steps.

This thread is for posting notebook photos and links to markdown, etc., documenting Week 1: The Concept phase. Our little informal accountability group started the process on Wednesday, June 1st, 2022, so this thread covers progress from roughly June 1 - June 8.

This is me, just to help things get started! 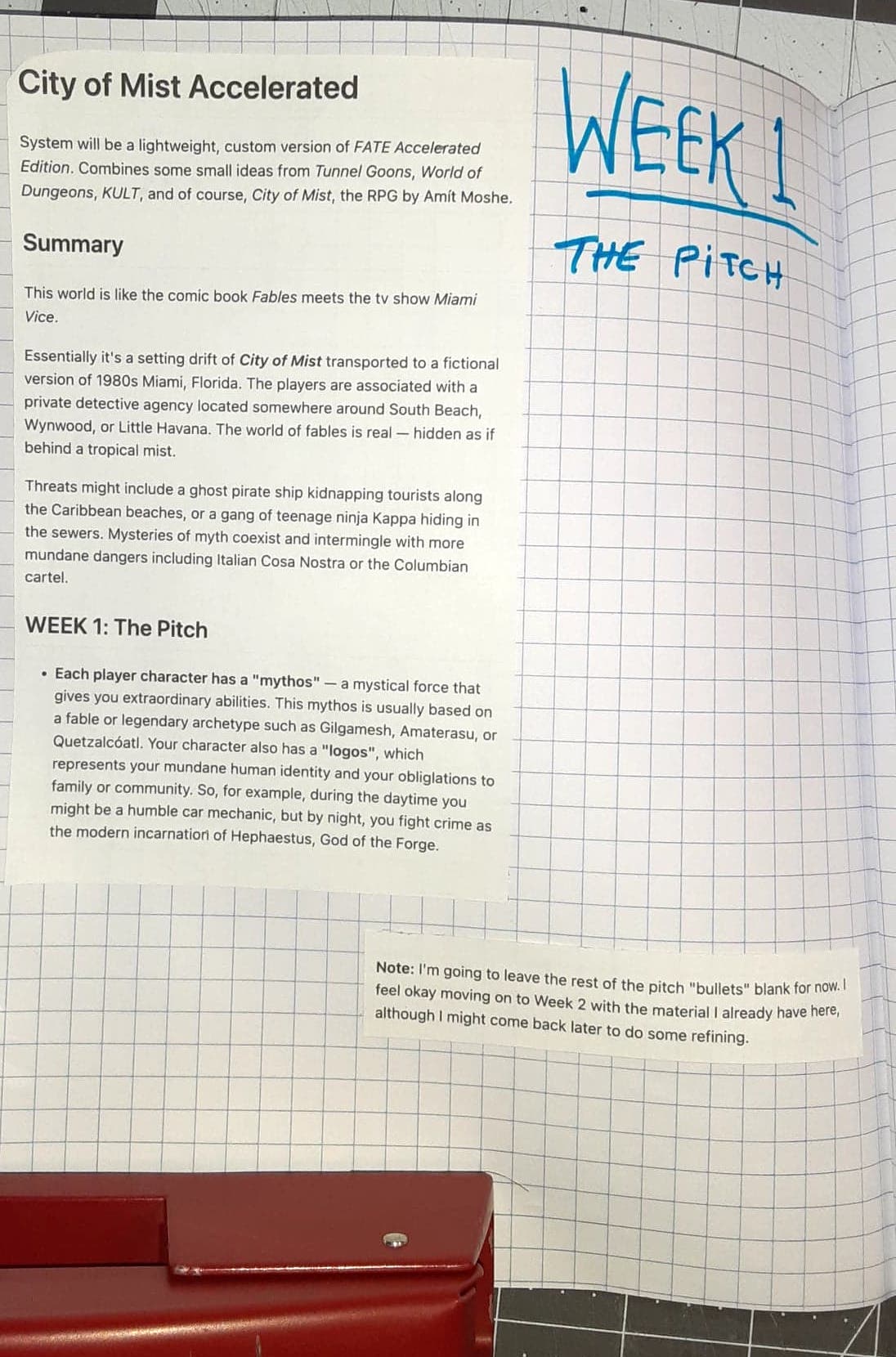 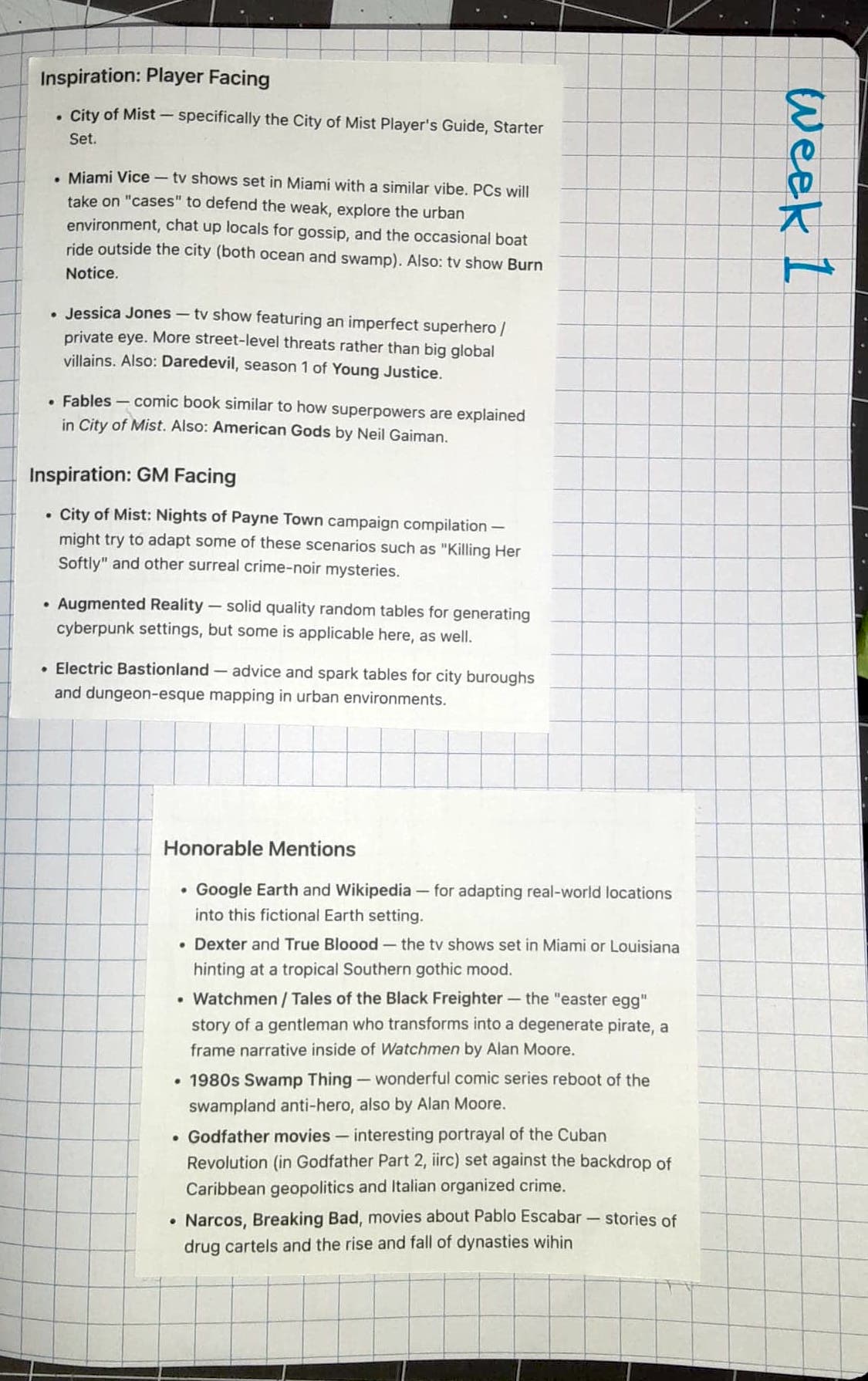 I’ve already received some feedback on my Week 1, and the main part I agree with is that it looks a little too tidy :-D. Going forward, I’m going to embrace *imperfection a little more and do more handwritten notes and doodles.

Using a google doc for mine, since I have dysgraphia which prevents me from writing physically for long periods.

Hey y’all. CapKudzu invited some of us from the Beggar’s Gate discord to share our Gygax 75 Challenge stuff.

The Pitch:
• Magic is rare and dangerous with lasting consequences for the caster
• Monsters come out primarily at night and were created by the civilizations that came before
• Players are regular people caught up in something beyond their control
• The world has been through several highly advanced civilizations that fell to ruin
• Technology and magic are intertwined
• Cults seek the return of the old world

Inspirations and Sources:
• Warhammer Fantasy by Games Workshop. Specifically as presented in the RPG. Players are basically regular people and magic will definitely mess you up if it goes awry.
• Numenera by Monte Cook. The idea that several civilisations have risen and fallen. Also the specific blend of science fiction and fantasy.
• Acid Death Fantasy by Luke Gearing. Just the general aesthetic of a desert wasteland with all kinds of weird creatures.
• Wasteland/Fallout by Interplay. Specifically the Brotherhood of Steel and Guardians of the Old Order as presented as xenophobic tech cults inspired my cults of the ancients.
• Leviathan by Scott Westerfield. The weird chimeric monsters in this series inspired some of my ideas for things the prior civilizations might’ve developed.

Welcome Heretic! I look forward to learning more about the setting. Like why the old civ created monsters and why the cultists want to go back to a monster-infested world (if that’s what they want). It feels to me like there might some key or mystery there surrounding control of the monsters. Anyway, good start!

Thanks Ray! The basic idea I have right now is that the prior civilizations created these creatures for labor, hunting, and agriculture primarily but over the intervening hundreds or thousands of years some of them have malfunctioned. The tech-cults basically see the ancients as creator gods and want to claim that power for themselves/see the monsters as being “children of the gods” was kind of the direction my mind was going. 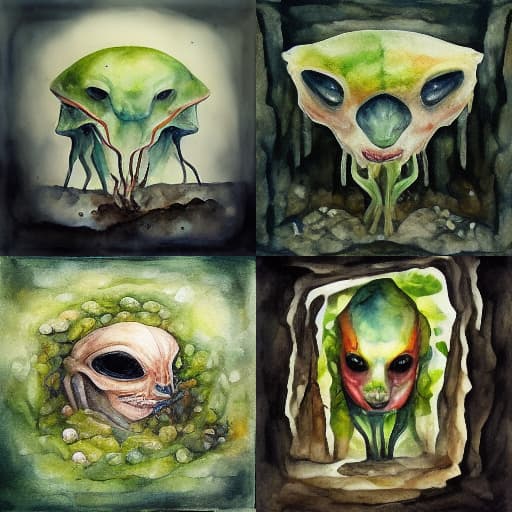 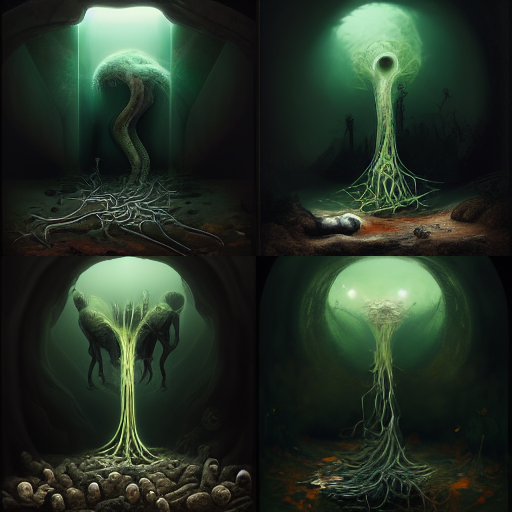 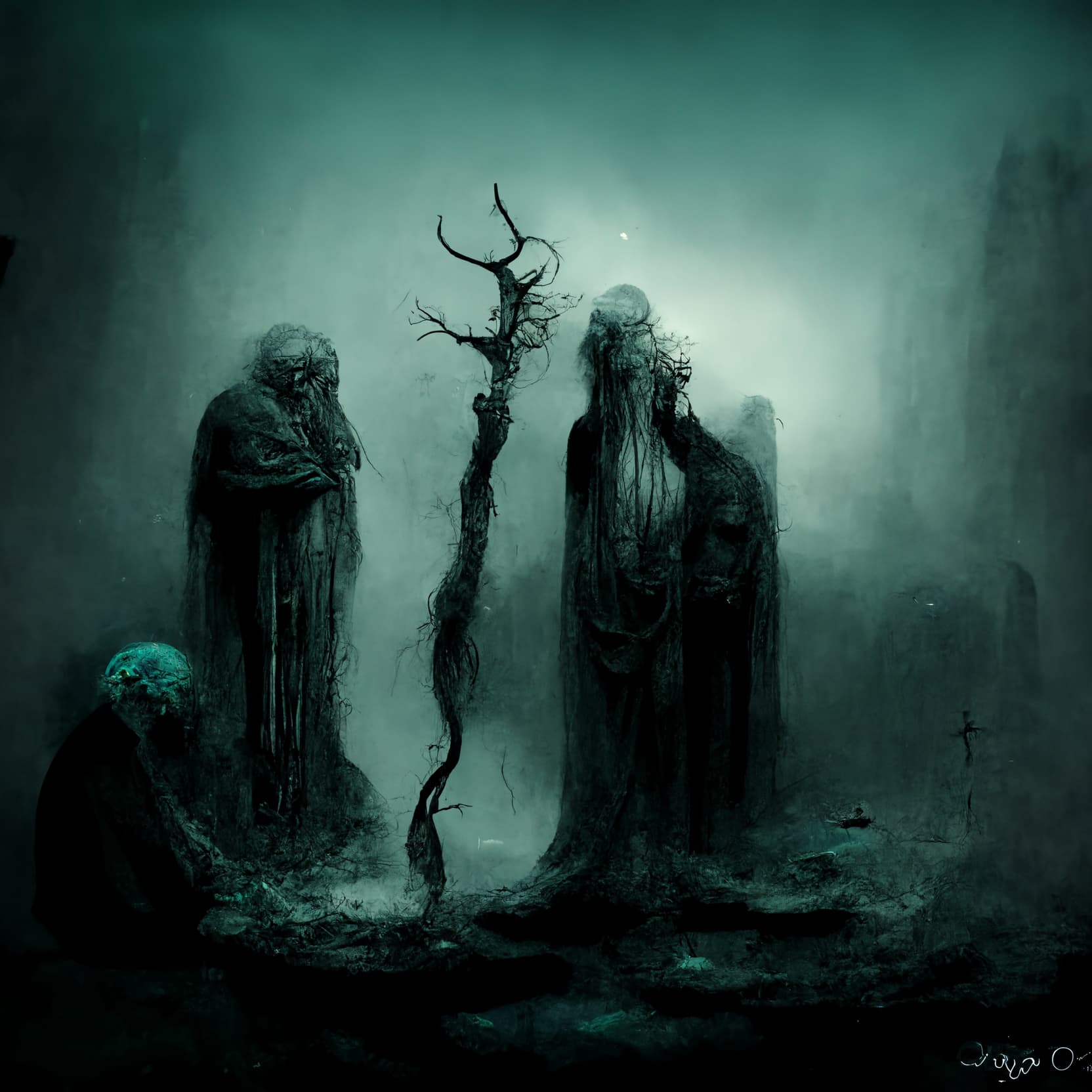 Excited to hop back on this challenge! I first did Gygax '75 about last month as a five day challenge to get an idea I’ve had for a Cairn adventure out of my head. (For extra encouragement, I scheduled the first in-person session of a TTRPG I’ve had since 2020 for “day 7” of the challenge, before I had even begun). I had the ability to work on it full time, but it was still a lot to get through the dungeon and town portions in a single day. I’m excited to see how the challenge differs when done “properly”.

I’m using this challenge primarily as a way to test out the adventure generation/GM prep tools in my upcoming game The Door Locks Behind You. Like last time, there will be some bits that are just not relevant for what I need, and I’m not really prepping a campaign setting as much as I’m outlining an adventure module.

Step 1: Get/create a notebook
This part was very easy, I already do all of my dev work in a notebook! I use a bullet journal for pretty much everything now, so I just started a new collection titled “NSR server June Gygax '75 Challenge” (real original title, I know). I’ve already picked out a color palette for the pens that I use in this journal, as it only contains dev work for TDLBY.

Step 2: Develop your pitch
Already going off script here - this was more brainstorming for me than it was a player-facing pitch, so I left a lot of information out that I already know about the greater world/campaign setting. I’ll add that back in for this write-up here.

Extra Credit
I posted about this in the thread on the NSR discord, but I don’t find moodboards particularly useful or worth the effort of assembling. I like to work off of screens, so keeping a social media platform open on the side is distracting, and printing out a bunch of pictures seems wasteful. Part of my inspirational sources includes a number of artbooks that already fill this role. So for the rest of week 1 I’ll be working on a Spark Table to use in the rest of the challenge.

Bonus
Here’s an actual candid photo of my messy battlestation setup while I work. I usually listen to GameChops on YouTube when I work and they just published a lo-fi Ocarina of Time album. 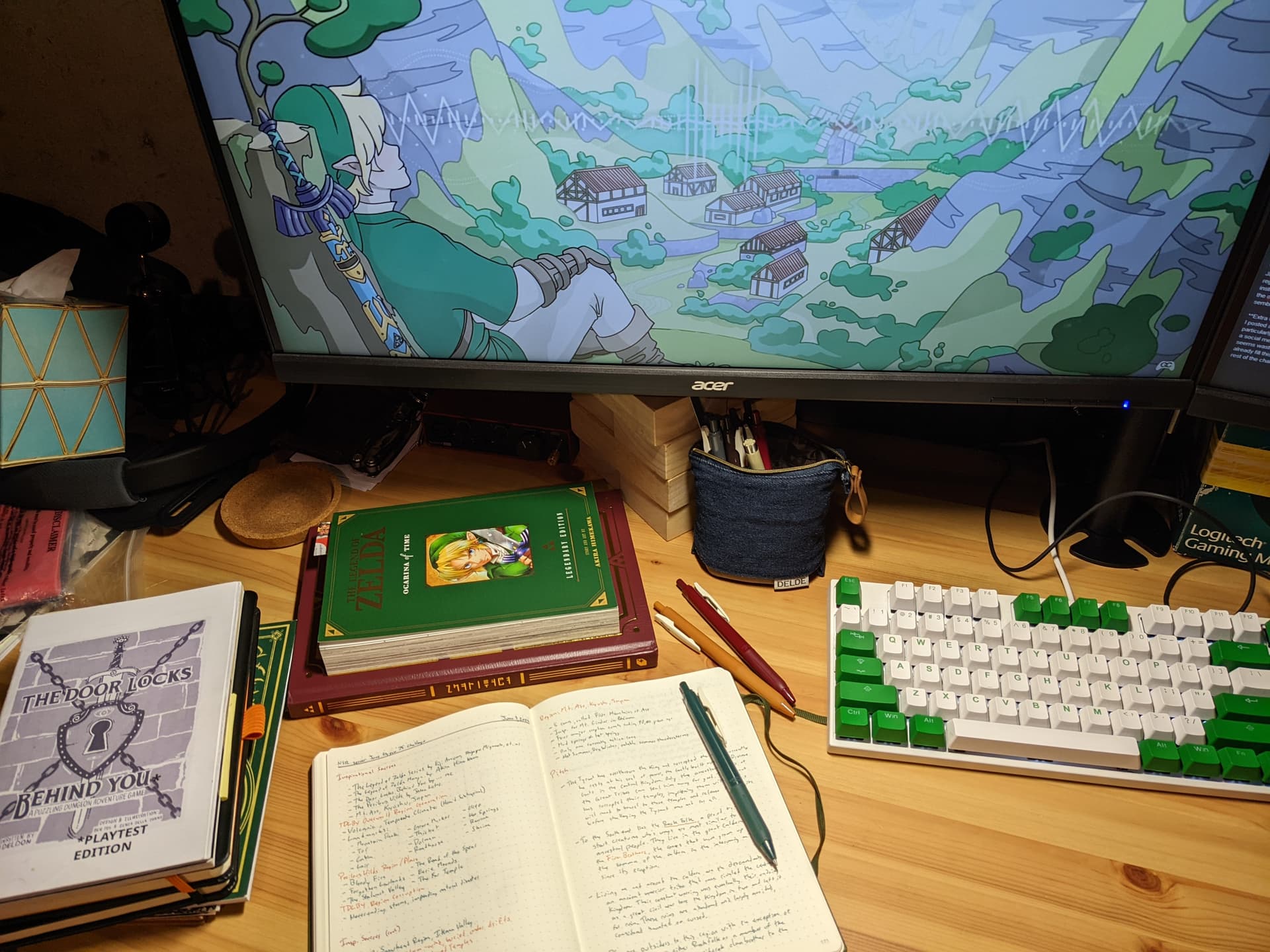 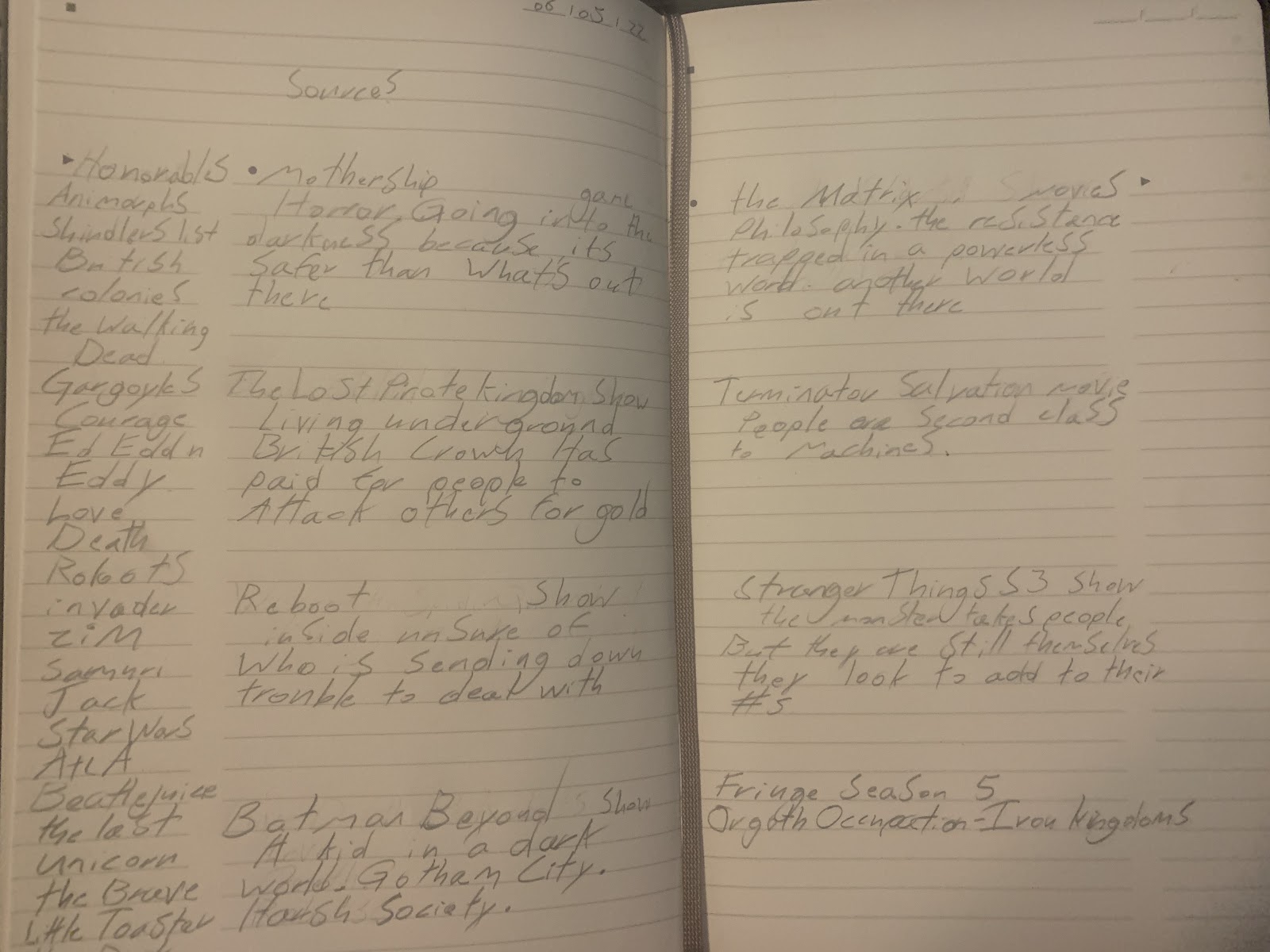 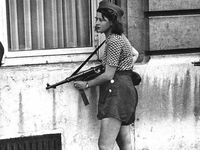 Explore a hand-picked collection of Pins about Hidin from the Dragons in the Corpses of Dead Gods on Pinterest. 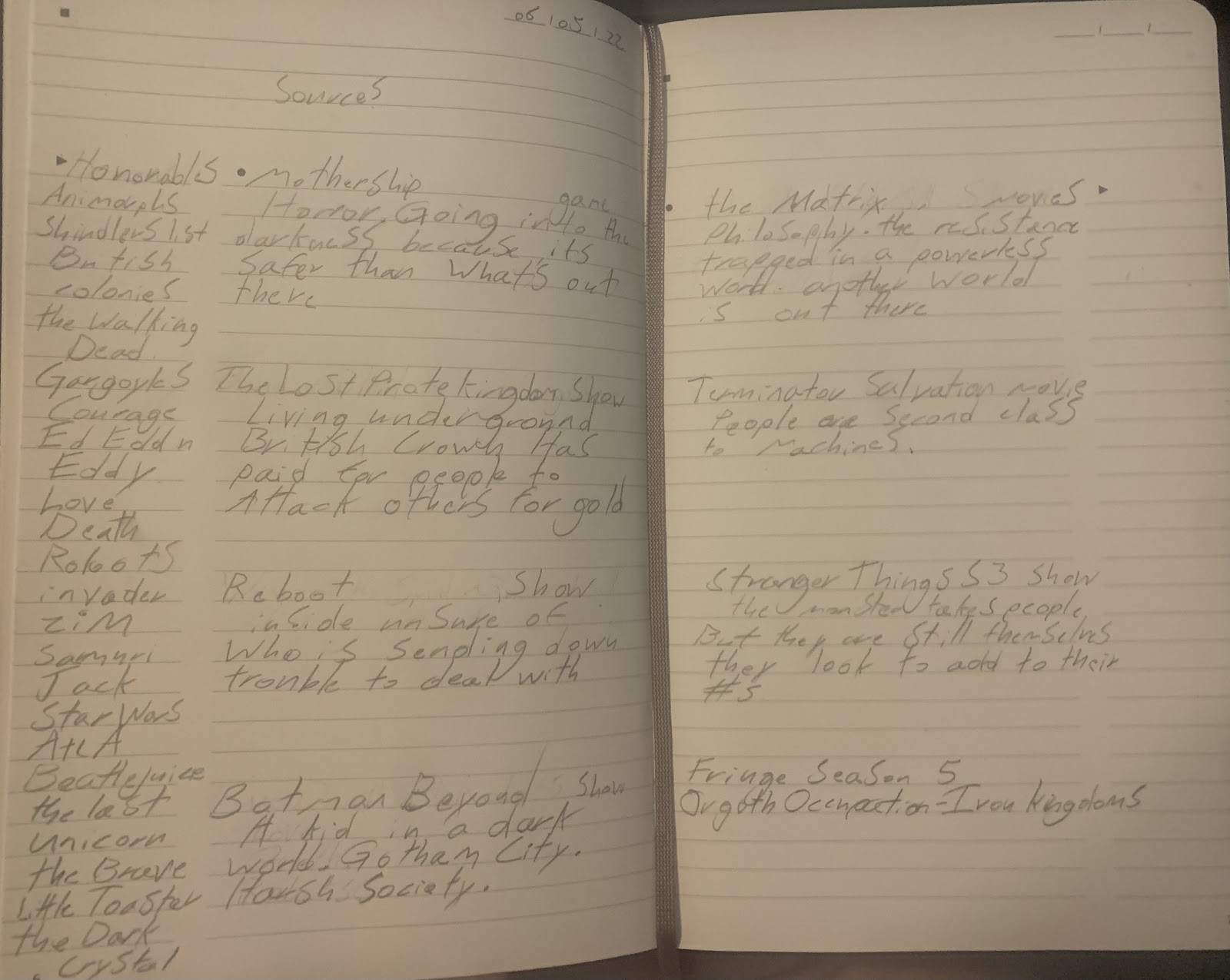 Awesome to see some love for Last and First Men! What an insane book. I need to re-read it…Starmaker is possibly even more mindbending.

I’ve actually quietly did Gygax75 last month in a non-public capacity without telling anyone! So I don’t know if I’ll have the energy to contribute to this one, but I’m excited to see what everyone comes up with.

Maybe share your work from last month as if you are doing it now? Like, show week 1 now. Week 2 next Wednesday, and so on. I LOVE to see process.

This is straight up wild. Love it.

Haven’t gotten around to giving the Cauldron a try before, but I’ll gladly use this little challenge to give it a go.

Here’s my spread for influences and the original pitch: 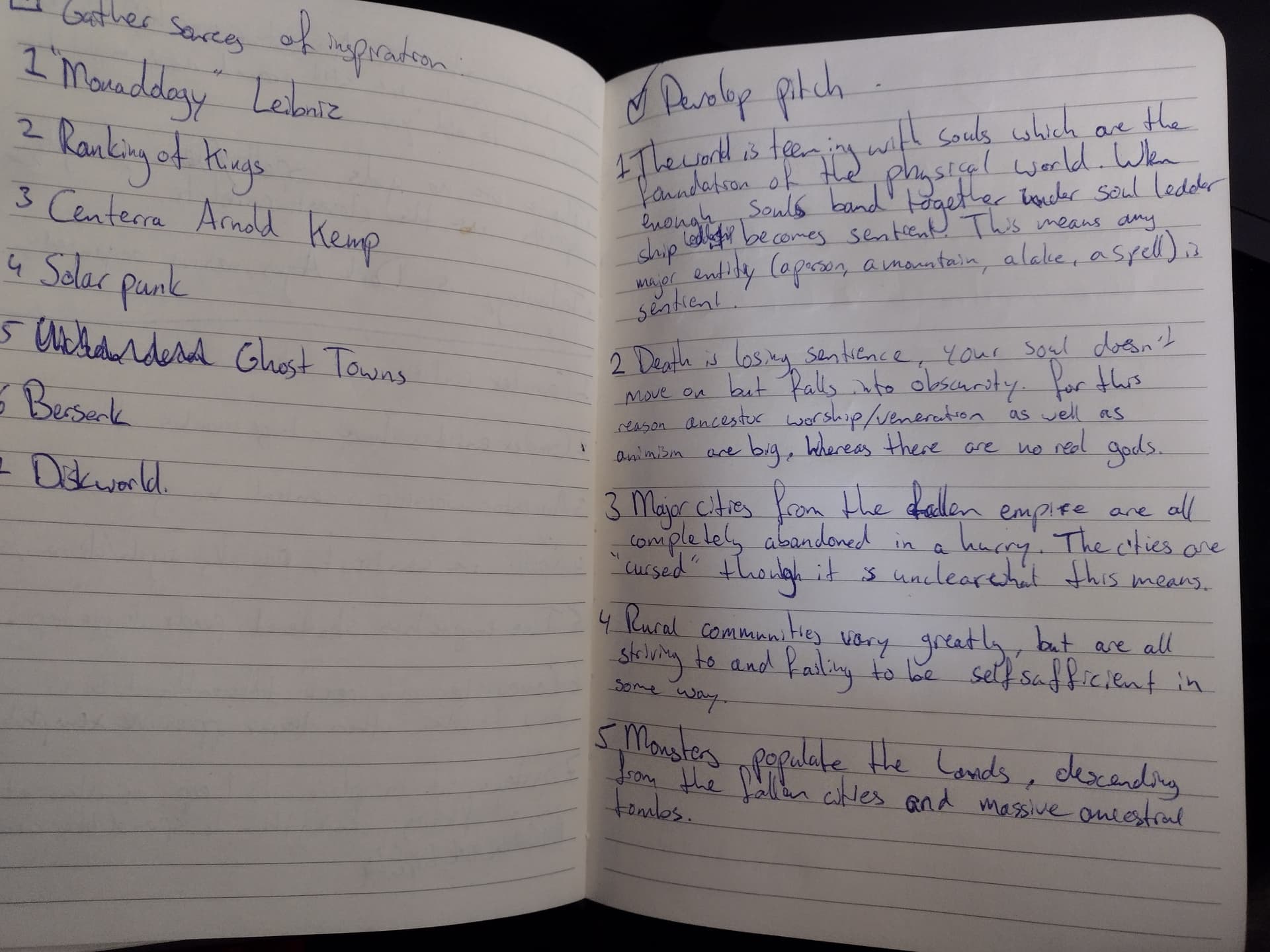 The nice thing about this excerise is that it makes you think a lot about the other stuff I might want in there.

For example, the solar punk angle makes me think of self sufficiency, so I am wondering how the town can get certain resources, like iron, in sustainable ways with a fantasy/weird world angle (for example, trees that shed iron ore bark flakes as long as the soil is iron rich, requiring folks to regularly find a way to put iron back in the ground)

The moodboard ended up being very inspirational as well, as I found this cool artist who’s vibe I think matches what I had in mind for the crypts beneath the surface. So now the content of that art is informing my ideas about what to put in the world.

I’ll try and take a stab at week 2 today

Looks awesome. Very cool to have you along for the journey!

Alright, fellow late-comers. I’m giving it my shot.
NOTE: I will be editing and focusing this over time, so consider this a living document.

A hundred Armageddons buried the ancients, but we have broken the cycle, and we have built Haven on their bones: A cocktail of the universe’s finest spirits, we stand lush and defiant against the cruelties of the Stars.

I struggle with, and would happily receive feedback on 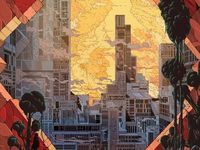 Alright, I’m here for Round 2: July! This is going to be a continuation of last month’s world, plotting out the next region in the area. I completed this week concurrently with Week 5 of last month, and this time I used the work-in-progress update from @rayotus’s website.

Like I said earlier in the thread during last month’s challenge, I already do all of my development work by hand in a notebook. I’ve begun typing up these regions for my own use, so I’ll spare everyone from trying to decipher my chickenscratch.

Unlike last month, I’m going to be creating a region from scratch instead of tracing over extant geography.

I’d tell my players about the above inspirations, but the following two I would keep close to the chest, to preserve some of the mystery of the world.

Additionally I created a Spark Table, like last month:

Excited to get into Week 2 again!

I love the addition of spark tables.