Our summer series continues with Week 4 of Ray Otus’s work book, The Gygax 75 Challenge. This week covers “Town Features,” including details on important NPCs and resources in the community where your campaign begins.

The challenge is based on an old article by Gary Gygax about how to create a setting and get it ready for actual play with your home group in roughly 5 steps. This thread is for posting notebook photos, text in bullet points, links to markdown, etc. The informal accountability group on the NSR Discord server started the process on June 1st, 2022, so Week 4 covers progress from roughly June 22 - June 29. 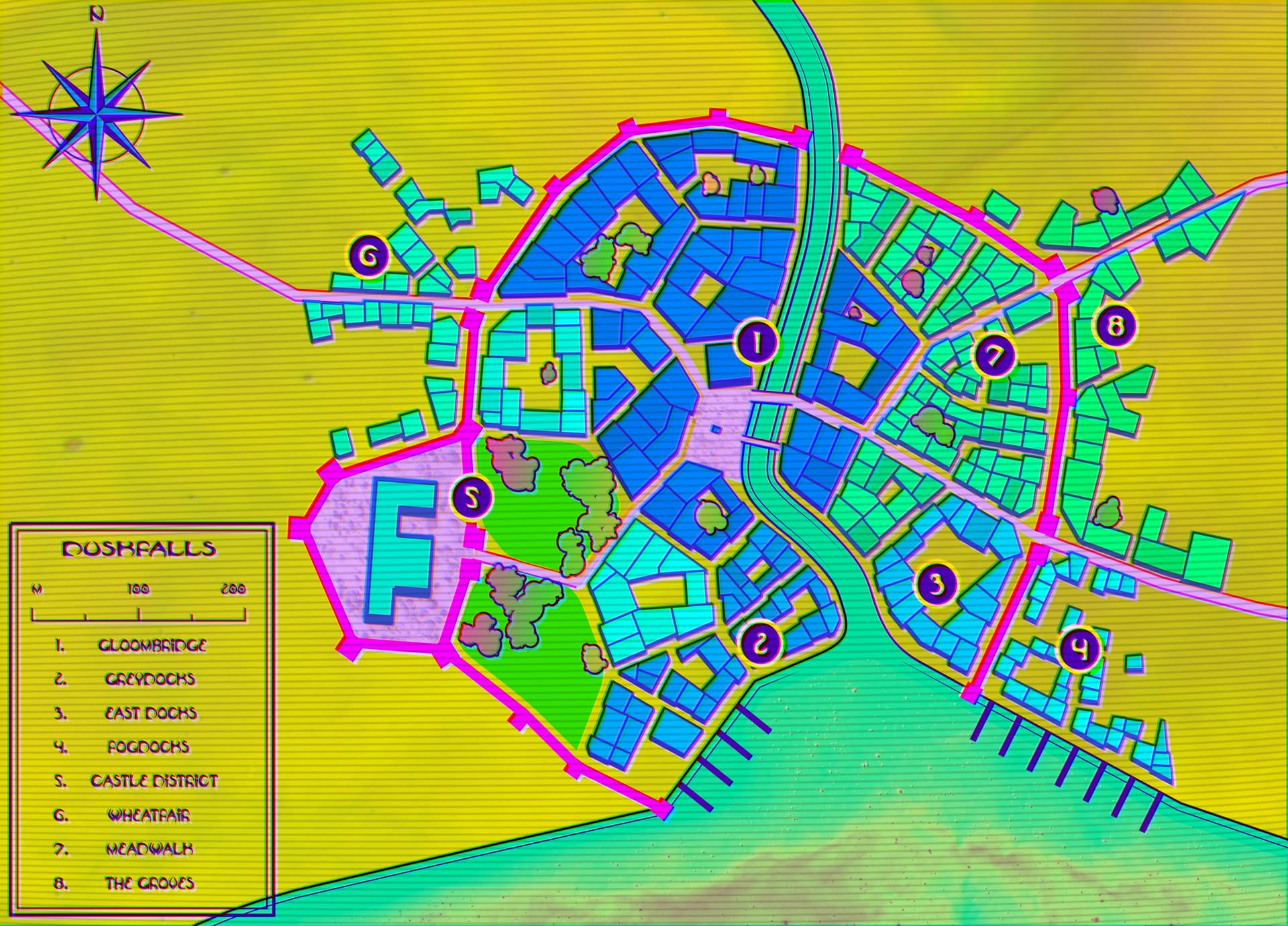 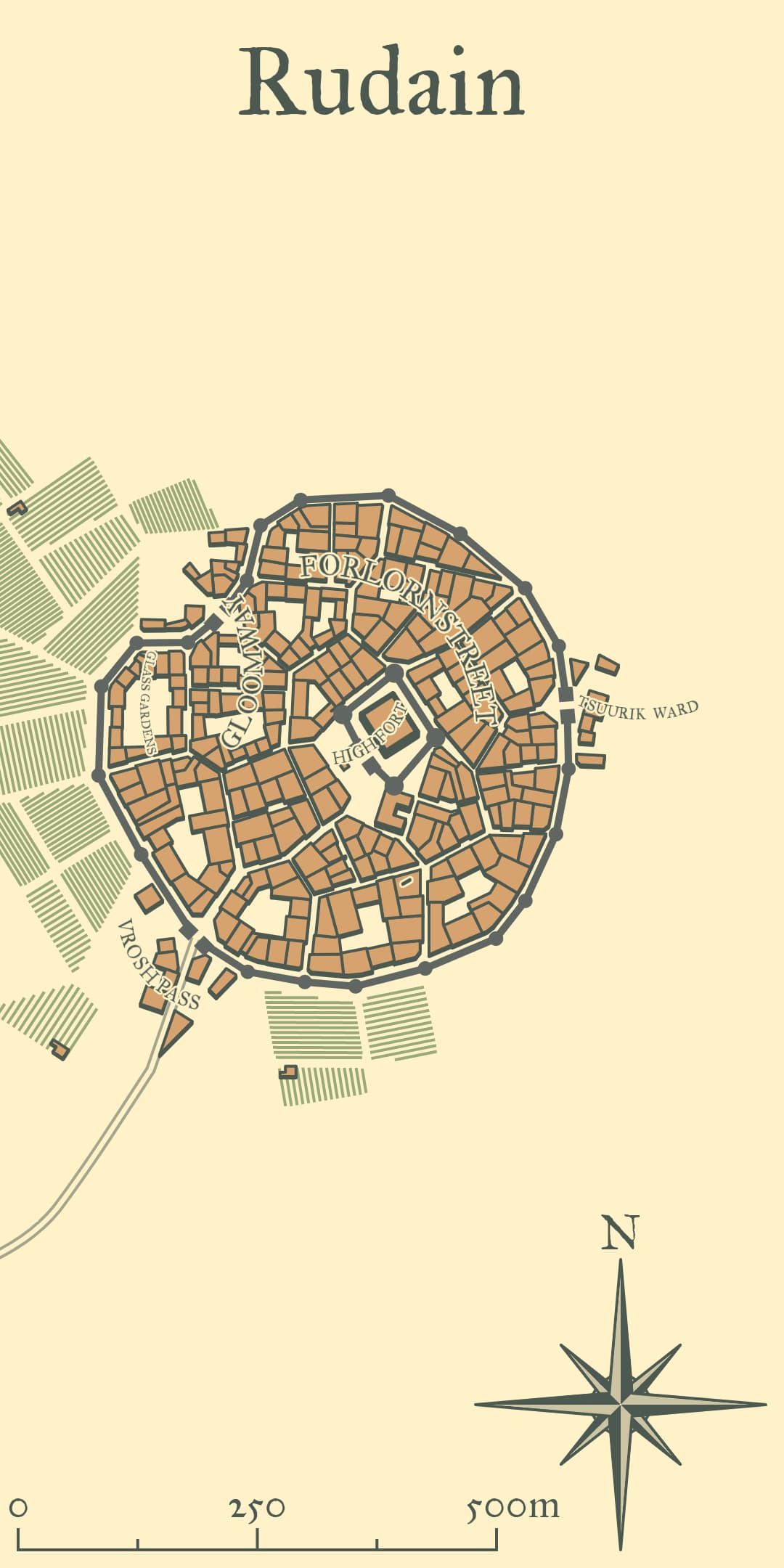 Shops:
• ‘The Hammer of Heaven’. Weapon shop ran by a pair of brothers. Supplies most of the town guards.
• Grel. Not an official shop, but rather a person. This old Tsuurik warrior makes sturdy armor at reasonable prices.
• ‘Szaren’s Stupendous Steeds’. Ran by a former warflock leader, this stable claims to have the finest steeds in the city ranging from agile Terrorbirds to hulking Merrik beetles.
• ‘Last Chance Supplies’. A general store near the north gate. The last place to get supplies on the way to Aelin or the Screaming Sands

Distinctive locations:
• Sha’ir Telmer’s Keep- home of the leader of Rudain. This imposing structure looms over the center of the city. The Sha’ir and the local Zarunite temple have an uneasy alliance, but tensions are growing as the Zarunite’s influence grows.
• Temple of Zaru- pyramid shaped structure in the southeast quadrant of the city. Honors Zaru Nol, Lord of Metal, and his brother Sol Kotar, Mind of Heaven.
• The Hall of Blood- part restaurant and part gladiatorial arena. Very popular among both high and low class citizens. Betting on the matches can be very lucrative.
• Lohatel Square- a wide open area in front of the Keep. Sometimes houses an open air market. Poets and entertainers often perform here in the evenings and most news passes through here.
• Hall of Spiders- home of the journalism guild. They have a reputation as being spies.
• Mata’s Inn- a small rest stop near the east gate. The owner adamantly maintains neutrality in her establishment. Violaters of this peace may find themselves missing appendages. Home to the best kebabs in the city.
• Garden of Glass- an open air exhibit of beautifully crafted glass sculptures on the west side of the city.

NPCS:
• Dolbrok, Captain of Telmer’s Guard. This burly man has a ragged chunk bitten out of his lip from an encounter with Rhokar raiders. He needs more money to support his family and secretly hopes that Telmer will name him heir.
• High Priest Kellos. This middle aged woman has a crystal eye and metal replacing half of her face. She needs to turn some of the guard to her side and wants more control over Rudain.
• Tchal, proprietor of the Hall of Blood. This 5 eyed Rhokar dresses in ostentatious silks. He needs the guard to stop sniffing around his business and wants his gladiators to provide security for the city.
• Kanja, head journalist. A tall woman missing two fingers on her right hand. She needs big stories and wants to expose the truth no matter the cost.
• Mata, innkeeper. An older woman with grey hair and a several scars. She needs to maintain her neutral status and wants enough money to retire.

Rumors:
• Dolbrok’s wife is the lost daughter of the Sha’ir.
• There is a Casket of the Ancients under the temple
• Tchal supplies soldiers to the Zarunite’s
• The Spiders are a group of assassins and spies that want to destabilize the city
• Mata is the killer of Khagan Odan, former ruler of Aratec.
• Eldra and Arden, owners of the ‘Hammer of Heaven’, are refugees from Aratec fleeing the new Khagan.
• Grel is the last of his tribe and once killed a half dozen Rhokar with his bare hands.

Hirelings:
• Savoi. This scrawny Vrosh brags about being the best tracker in Rudain. He’ll sell his services to the highest bidder and guide them through the wastes. He demands high prices to support his children and wants to find steady work so that they will be taken care of.
• Cyka. This quiet Rhokar is a gladiator deeply in debt to Tchal. If her debt was cleared she could provide extra muscle to her helpers.
• Adan the Swift. A “second story man” as he styles himself. This short human has an overinflated ego, but his work speaks for itself. He can crack most locks and disarm most traps. He wants fame and riches.
• Dryda. A Priestess of Zaru Nol. This woman has had much of her body replaced with cybernetics and wields strange magics. She seeks the knowledge of the ancients and will accept artifacts as payment for her services.

This week is getting posted before Week 3, because the point of this challenge is to create something for your own usage. The notes I have from Week 3 are done in pencil and unreadable no matter how I try to photograph them so that post will have to wait until I’ve recreated them dungeon diagram digitally.

I knocked this prompt out in a day. Typically I don’t go into this much detail for “starting towns” and when I do, I end up going into too much detail and creating an urban adventure. 90% of the reason I was able to complete this so quickly is because I had a map to start with. Since I knew that I wanted Goron City to be set in a sinkhole, I used the map from Beak Feather & Bone, quickly dropped a “dirt” color on the ground layer, and started labeling buildings. I don’t know if it’s because the source material is a bit goofy, or if it’s specifically because all of the NPCs were Gorons, but I had a lot of fun making this.

I didn’t do any rumors yet, because I don’t know enough about the dungeon to generate them. If I were to spend more time on this, like an entire week instead of a single day, I’d definitely be adding more info on some of the sites in the overland that I don’t know too much about at this point, as well as fleshing out either The Roadhouse or The Millworks.

Without further ado, here’s my notes for Week 4: 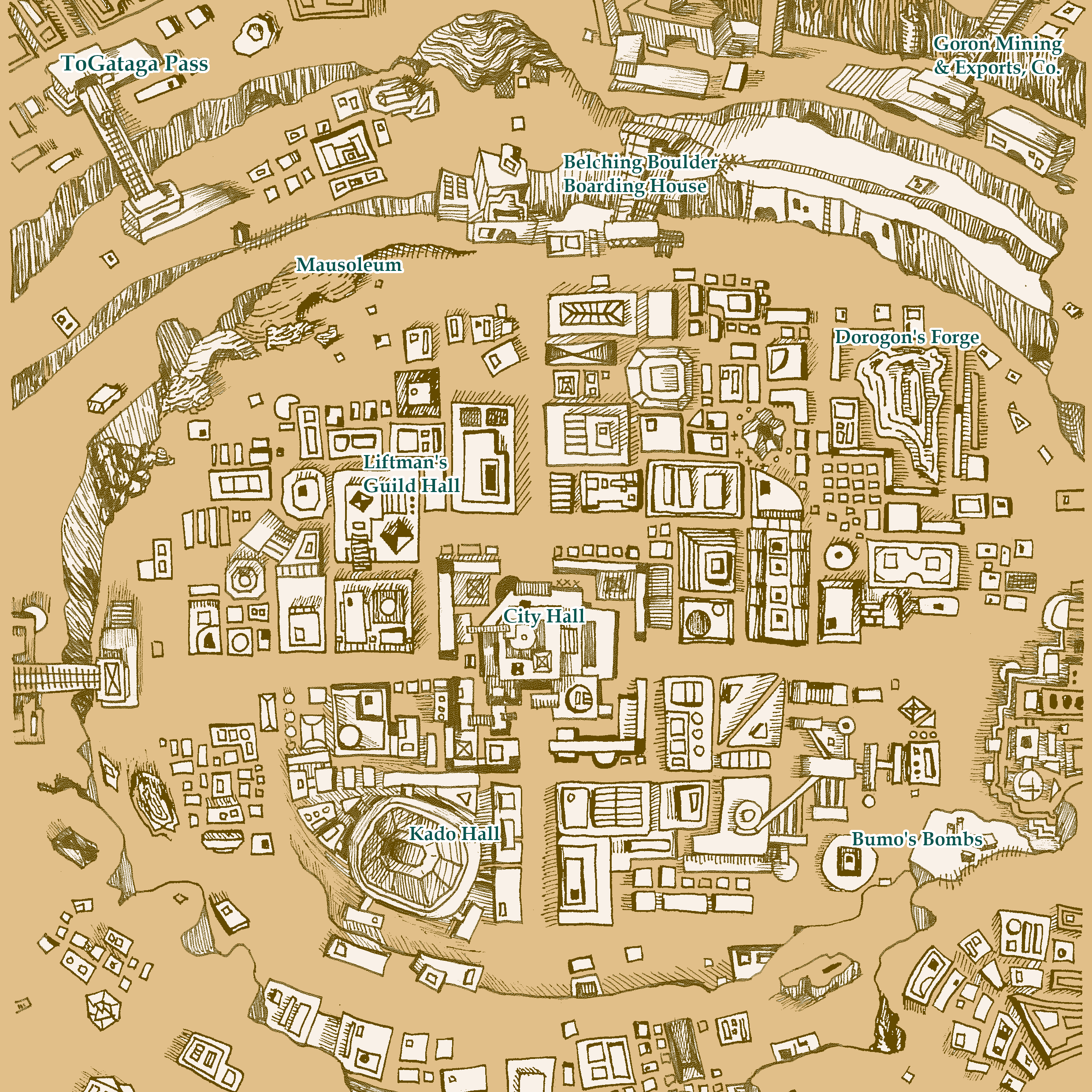 Built out of a sinkhole on the western side of the Gataga mountain range, this is the ancestral home of the Gorons. As is the case with most Goron construction, buildings are carved out of the rock face or constructed of simple stacked boulders. There are a number of more modern crudely-wrought iron constructions as well, most notably the series of elevators, funiculars, and minecarts that the Gorons use to ascend and descend the tiers. It is incredibly hot here, and only gets hotter the deeper you descend into the pit. As such, the Goron use very little in the way of flammable materials, and you’ll be hard to spot a cloth banner or wood signpost. Social stratification, what little there is in Goron society, is on display here, with the eldest and most respected members of the city living in the bottom of the pit, where it is the warmest.

Ok. I half-assed this a little. Just spent a few hours on it today (outside of trying to get the Midjourney AI to do some of the work for me, haha). To be fair, I was at a business conference all week and I am fairly high up in the software company that ran it. Also I caught COVID and have been a little bit down (not too bad) for the last few days. So here is my sketched out ideas on the “town” of Into the Yellow Planet. 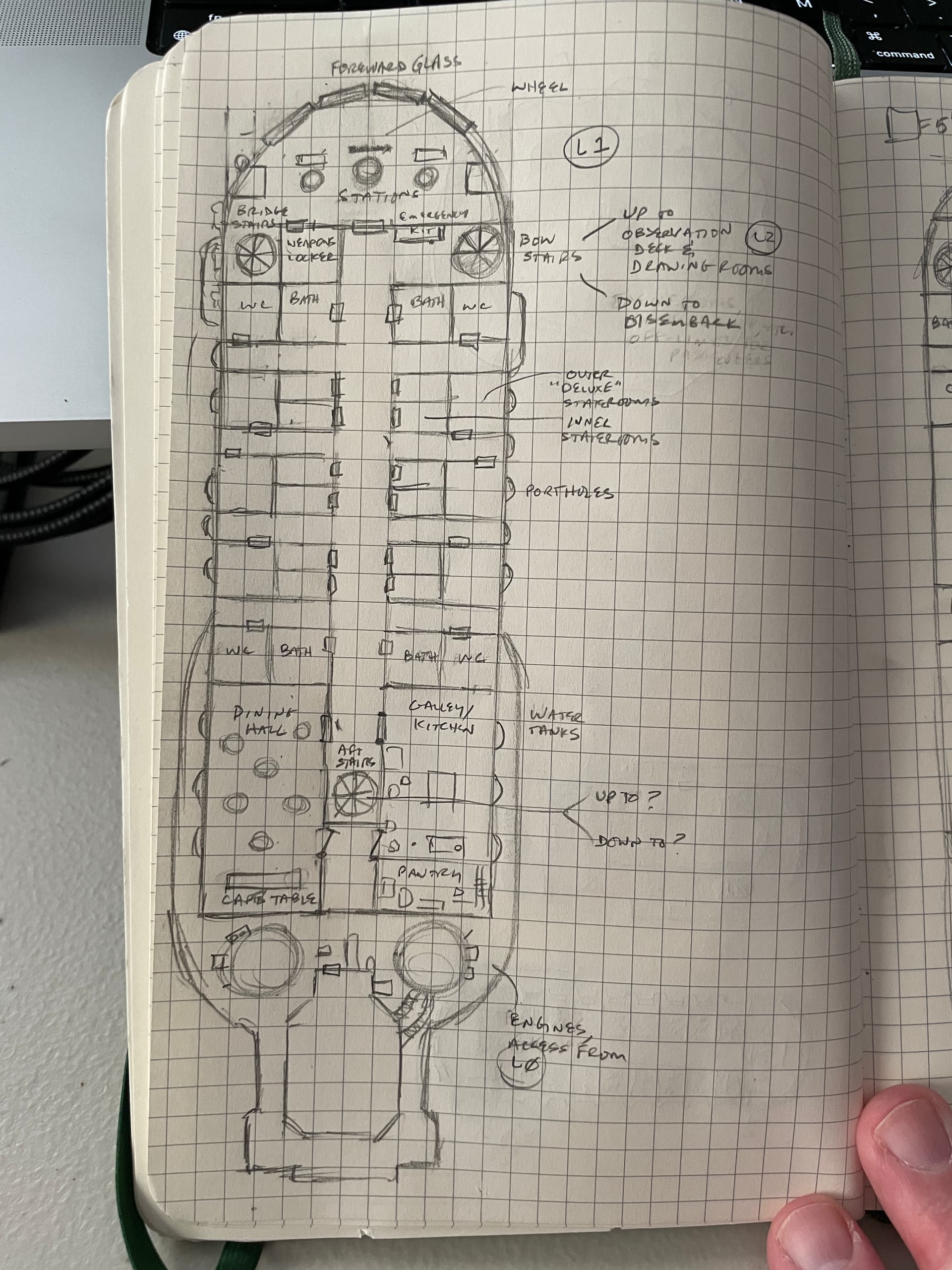 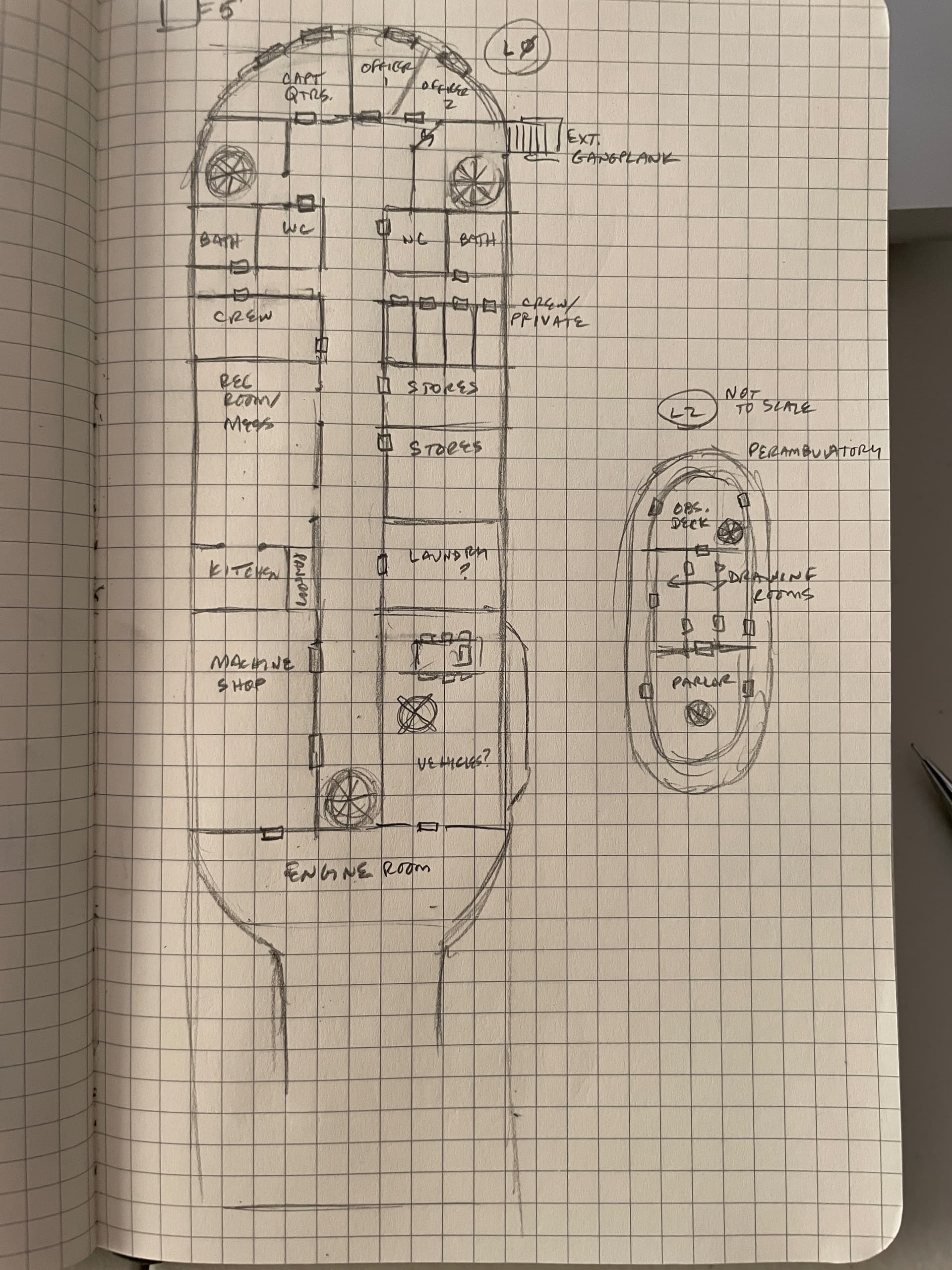 Name the places where equipment can be found/bought

The advantage of a ship is that it has to carry everything with/on it. So this part was kind of easy.

Again, surprisingly easy because of the nature of the ship. But I could have put more effort in for sure.

Actually I intend to create the full crew and some of the passengers. But I’ll just use these:

Part of me is in “re-think” mode right now. I think I got off the rails somewhere and making this TOO odd, too silly. I want to, when I revise, dial it back in some and make it more subtle and nefarious and just weird (not gonzo or always bizarre). 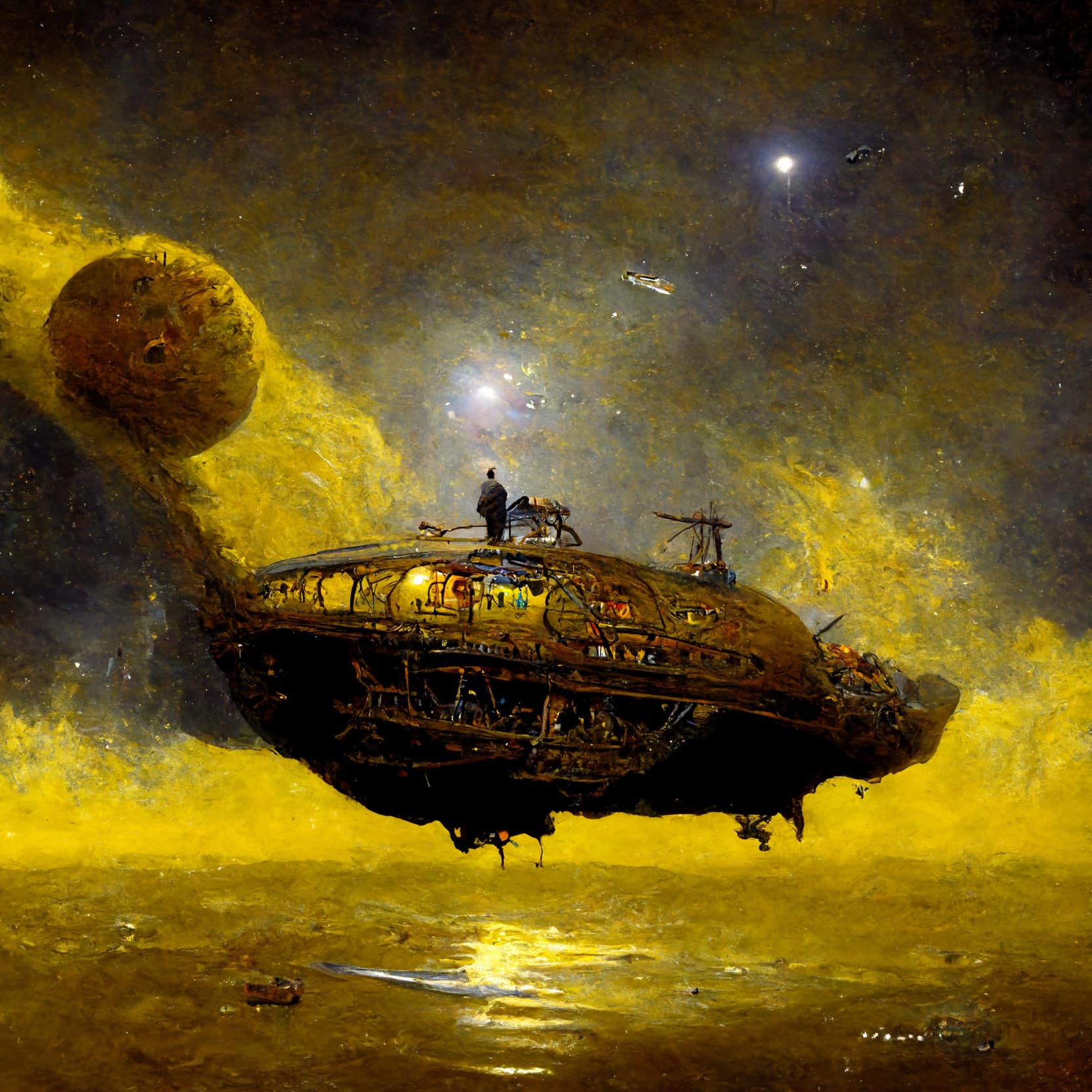 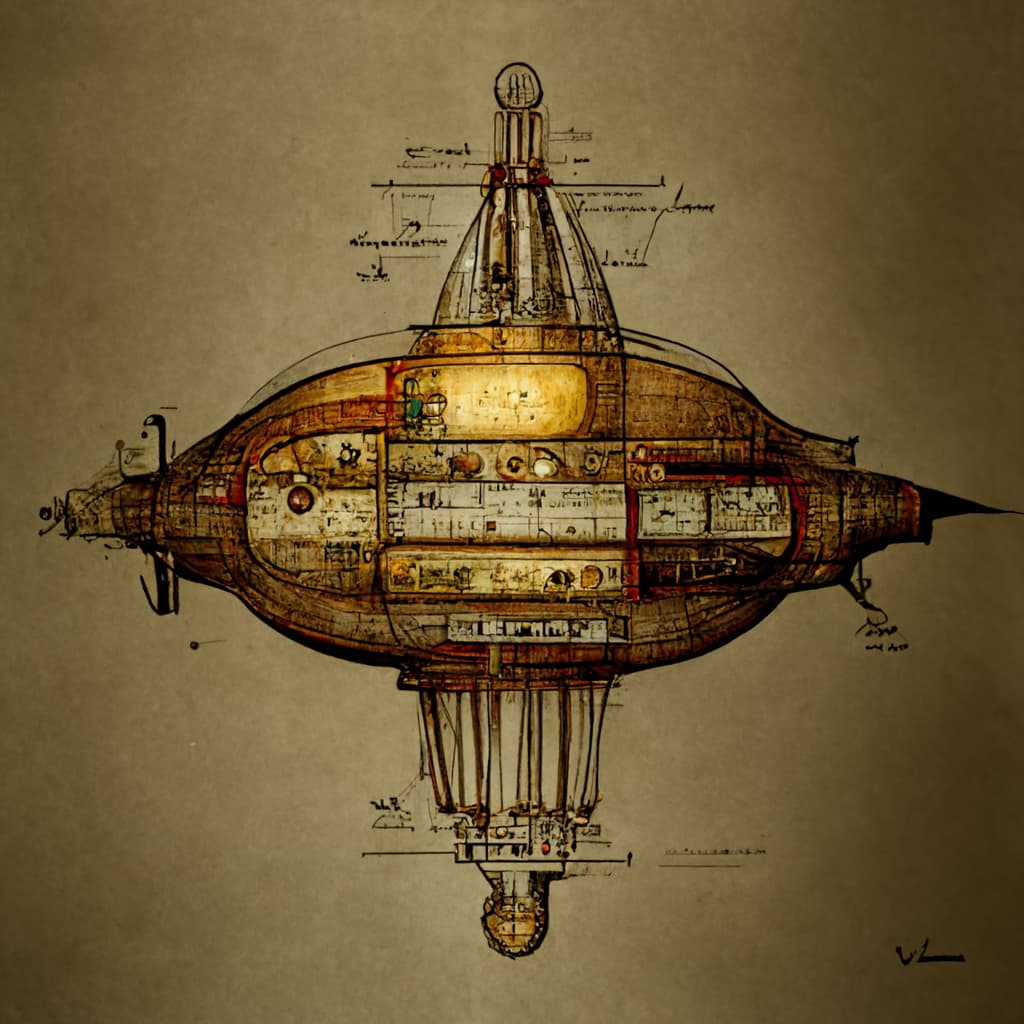 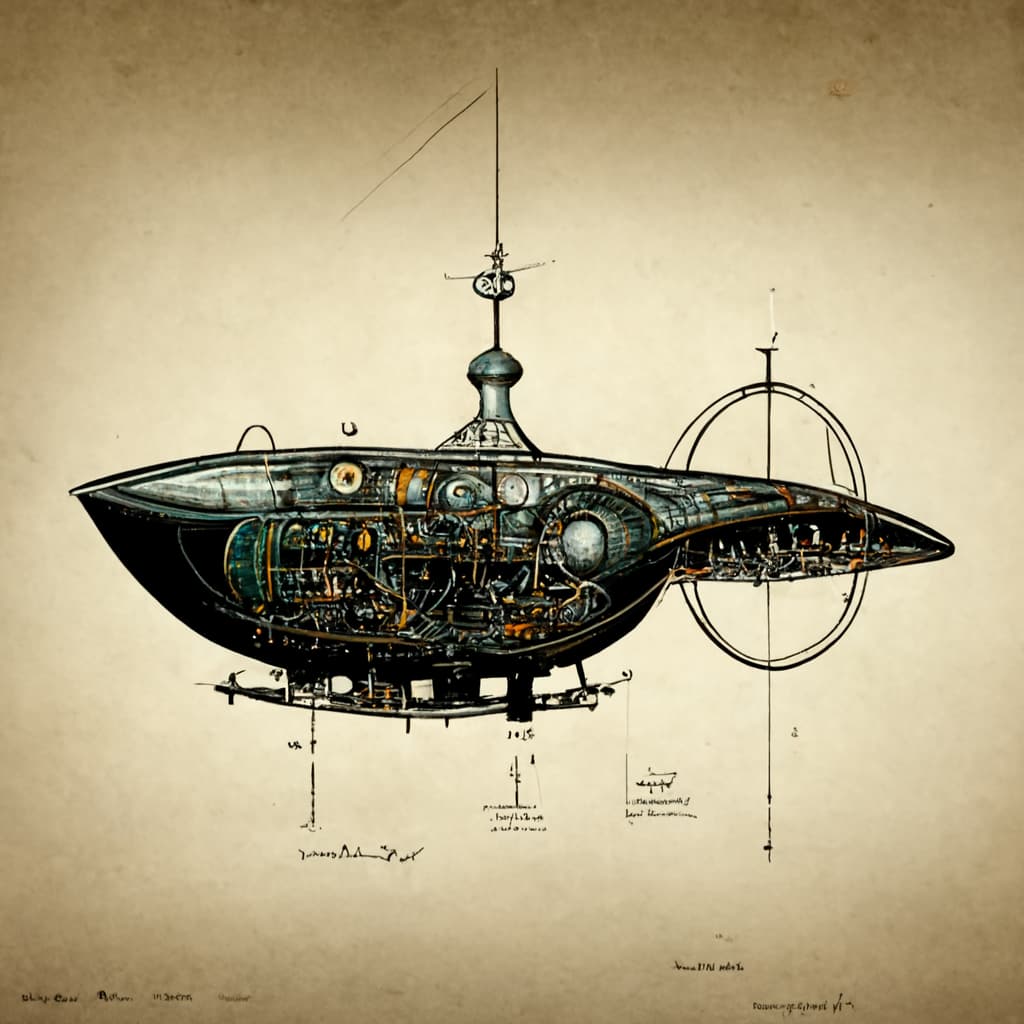 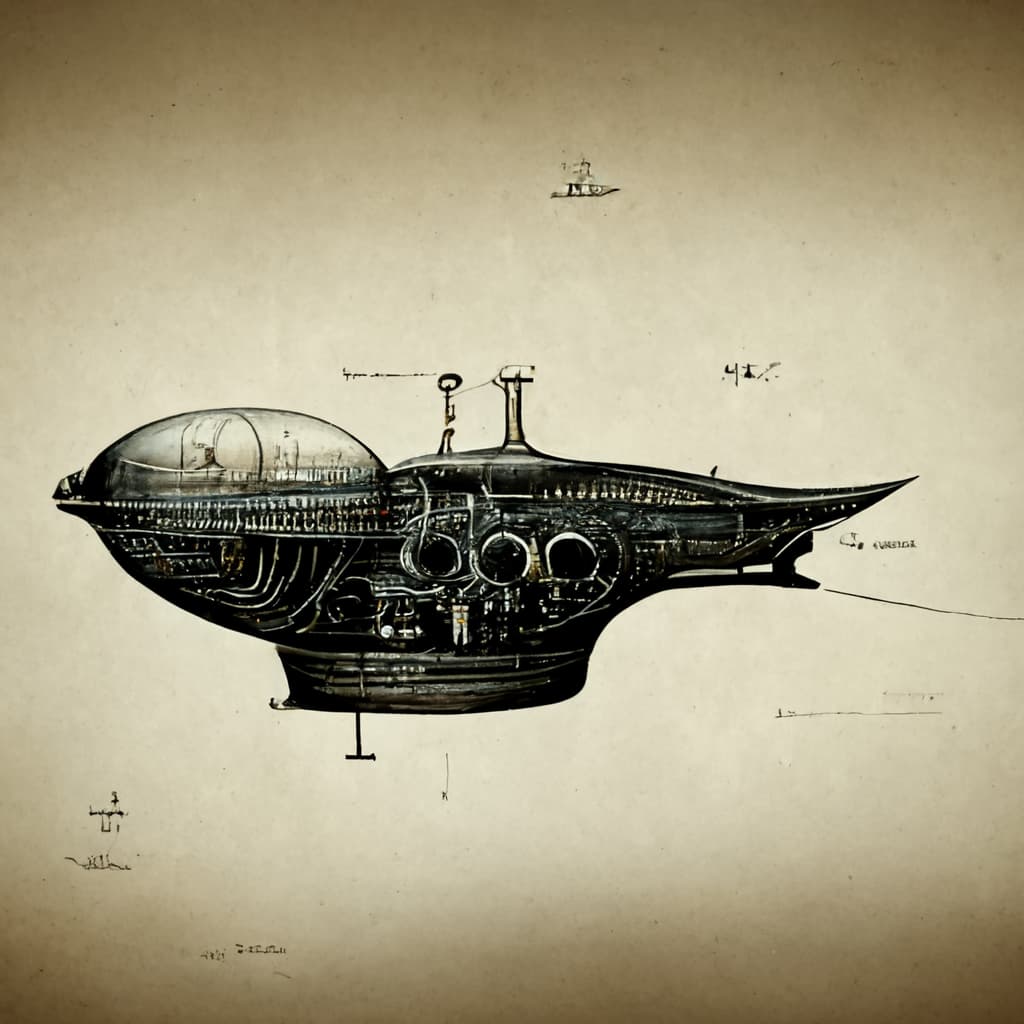 Reworked that first image slightly on my iPad to scale down the figure and outline the front of the ship better. It’s almost perfect now, for my tastes. Not sure what the story is tho. Are they hovering over a sentient lake-moon (ala Solaris) while staring through the phlogiston up at the yellow planet? 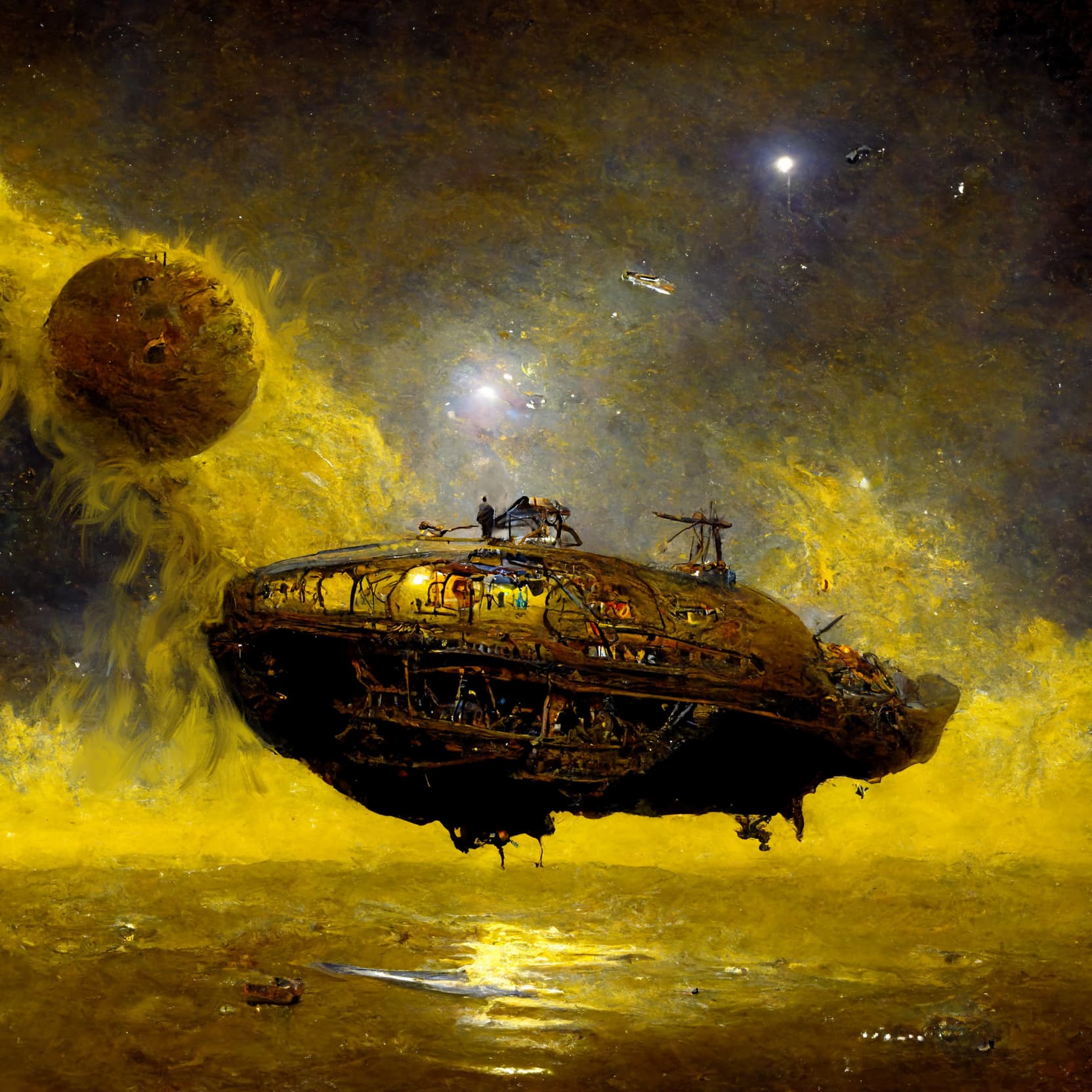 Is that your map? Killer!

No, no, haha. If only I had that much artistic talent. This is the map from a map-labeling/world building game called Beak, Feather, and Bone. All I did was a quick recolor of the base layer in GIMP, followed by basic labeling and cropping it to size.