Our summer series continues with Week 5 of Ray Otus’s work book, The Gygax 75 Challenge. This week covers “The Larger World.”

The challenge is based on an old article by Gary Gygax about how to create a setting and get it ready for actual play with your home group in roughly 5 steps. This thread is for posting notebook photos, text in bullet points, links to markdown, etc. The informal accountability group on the NSR Discord server started the process on June 1st, 2022, so Week 5 covers progress from roughly June 29 - July 6.

Wasn’t sure if I was going to do anything for Week 5 since it seems optional, but I decided to jot a little bit down. The tasks I picked were;

• Sketch the geography of the continent or even the whole world.
• Develop a pantheon of deities and their domains
• Make encounter tables for each terrain type in the hex map.

I used an online map generator until I found one I liked. 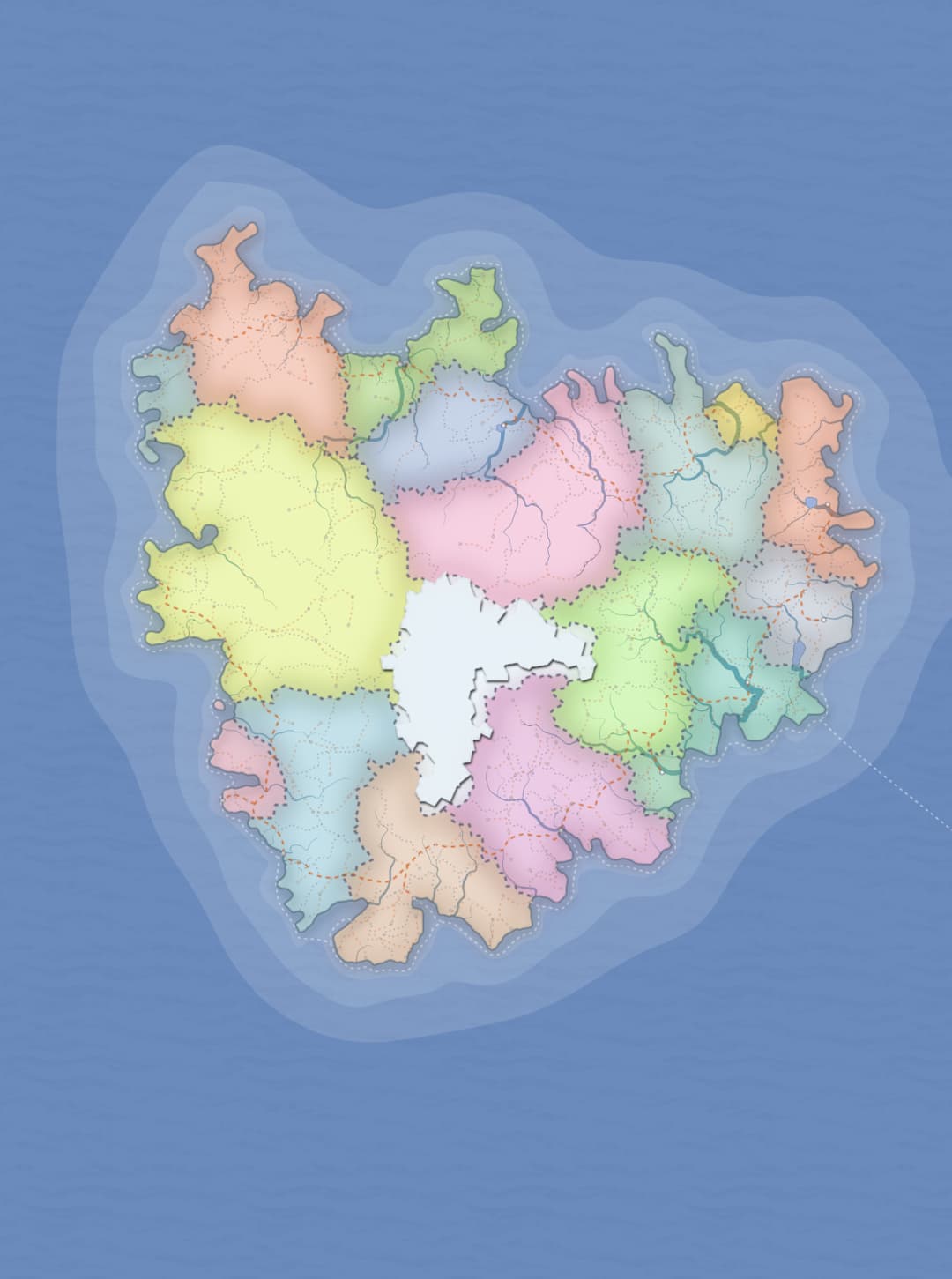 • Ijora- the starting region for players. A province in the Aeleid Principalities. Bordered by the Aratec Khaganate on the south.
• Aelin- Capital province of the Aeleid Principalities. Lies miles north of the Screaming Sands. The greatest human city in the known world.
• Aratec Khaganate- home of the Gorak. Gorak are a eusocial species composed of three separate subspecies. Humans say they look like a bat had a child with an ape. Gorak for their part think humans look like infants. The Khaganate is expanding northward after the untimely death of Khagan Odan.

• Zaru Nol, Lord of Metal. This deity is represented by a muscular man with wires for hair and skin made of steel. He is the patron of industry and creation
• Sol Kotar, Mind of Heaven. Twin of Zaru he is physically smaller and has skin of glass or crystal. He presides over invention and experimentation.
• Marai, Lady of Water. She is represented by a beautiful matron wearing blue robes. She brings life, but her rage can destroy entire towns.
• Elara, Watcher of the Dead. This deity is an middle aged woman clothed in silver. Because sky burials are traditional in the Principalities, she is also considered to be the Moon. Some stories paint her as the wife of Marai.
• Tul Gesh, the Thundering Fist. Represented by a man with eyes like lightning and hair made of thunderclouds. Tul is both a war god, harvest god, and god of storms. Some stories say he used to be married to Marai before Elara stole her away.

Vrosh deities:
• Sozara. The Vrosh practice ancestor worship, but there is one ancestor they all revere. Sozara was a huntress beyond compare and legends tell of how she liberated the Vrosh from the tyranny of humanity.

Tsuurik deities:
• Ra’khan. Represented by a orange scaled, massive Tsuurik warrior. This deity is said to be the sun itself. The Cult of Ra’khan forbid worship of any other deity besides Ra’khan nearly 80 years ago. Tsuurik from the homeland are fiercely devoted to spreading the worship of Ra’khan throughout the world.

Gorak deities:
• Gorak are largely agnostic. Some hold reverence for the Seven, great heroes who defended Aratec from Rhokar forces in the days before it was an empire, but they don’t truly worship them.

Random Encounters
For this one I just did d6 tables. There’s also some overlap in different regions.

Swamp
Swarm of rot flies
Pack of chul, a carnivorous fish
D6 tech-cultists hauling something from the muck
Fungal Shambler
Strangleweed patch
Slythjaw on the hunt. An amphibious monstrosity with a paralyzing shriek

Hoping to be able to get this to the table soon. Think I’ve finally figured what system to use too

I’m working out of my revised version of G75. You can see it in progress here: https://rayotus.com/gx75v4/gygax75v4c.pdf. Note if you see a graphic in there that belongs to you, I have either recently reached out or will. I’m making a version that includes some examples from other individuals, like y’all. I will get your permission before doing anything serious with this. Anyway, in the new version week 5 has only two requirements: look back (summarize all the loose ends) and get the game to the table… The old stuff has been moved to extra credit as ideas for future work.

I’ll admit. My G75 entry this time feels very rushed/unfinished. I’m ok with that given that I wasn’t expecting to do it and rushed it quite a bit. But I like the idea well enough to sort of iterate back through it. Maybe a week at a time (again) as if I’m re-taking a college course.

I started this week as the conclusion to this month’s challenge, but I’ve also hopped on to the NSR server’s current July challenge, so this was done in concert with Week 1 for that challenge. I quickly adopted Ray’s latest version of the challenge, since I was already doing that, essentially. Most of the work this week was in revisiting the dungeon from Week 3. I’ll update that thread when the rough draft is finished (since I didn’t come close during Week 3).

Despite saying I wouldn’t, the one thing that I did from Week 5’s Extra Credit is sketching out the larger world map: 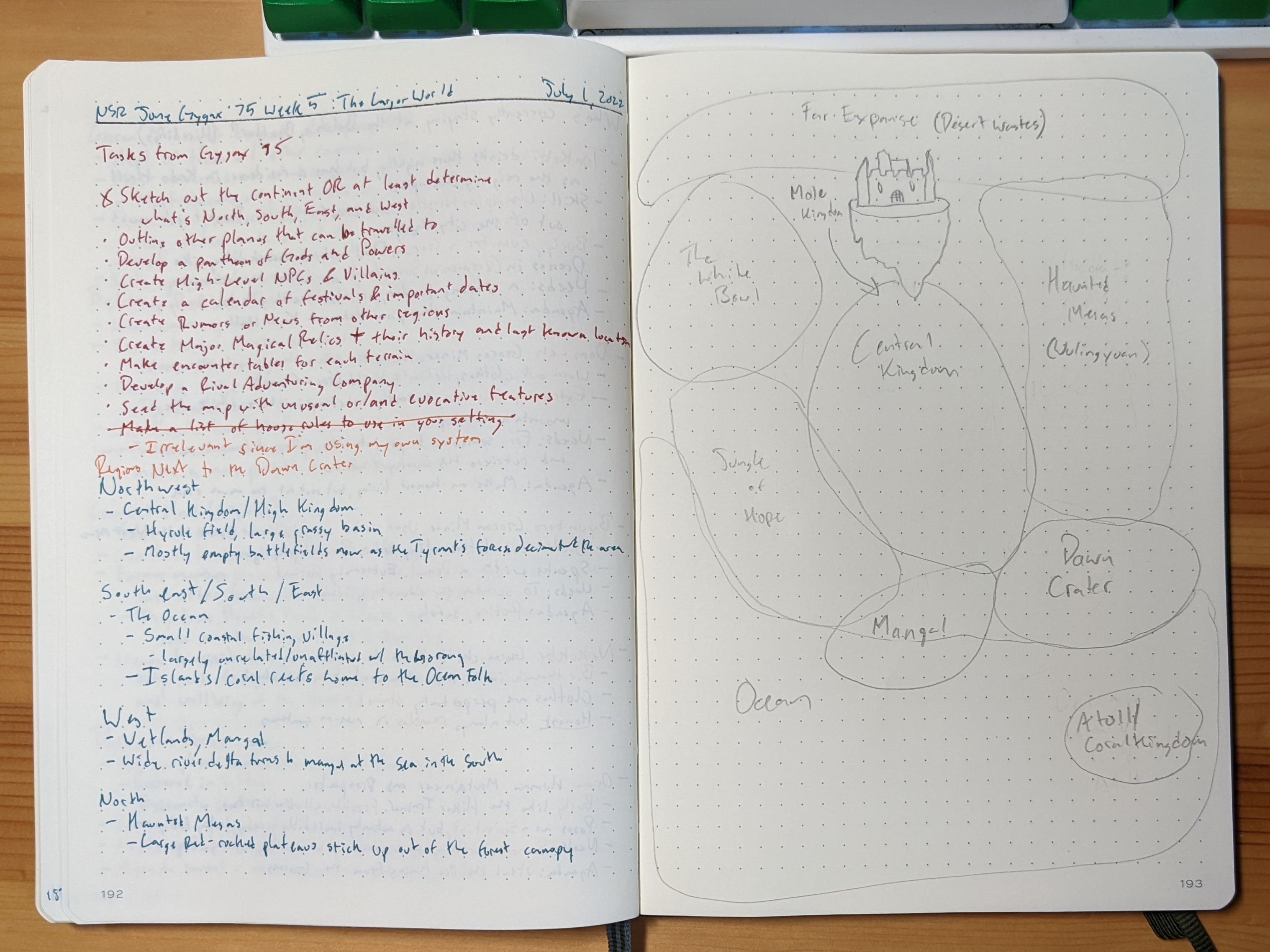 This’ll be an ongoing project for me, I’m sure. While building out this world I started to riff on an ongoing theme of “Tropical Hyrule”, taking a lot of influence from the geography of south eastern China. I’ll certainly keep up with that, as I like the idea of this being “the continent” in a sandbox campaign based on Thousand Thousand Islands. I used Perilous Wilds to generate region names and then morphed them to fit a tropical or temperate-monsoon region. “Mole People” is a placeholder, but I might go with it, as I wanted one of the regions to be a traditional “underdark” explored through a Zelda-esque lens.

Hoping to get this to the table once the dungeon is complete, as part of ongoing playtests for my game. As for what’s next, I’ll be continuing the challenge in one of these new regions for July, posting to the threads again.

Thanks to @CapKudzu for taking the initiative in organizing all of this, @DuvelmanDice for the initial spark that started the thread, and of course @rayotus for writing the document in the first place!

Despite saying I wouldn’t, the one thing that I did from Week 5’s Extra Credit is sketching out the larger world map:

Haha. Got ya. Seriously though, people think of this as being so much work. It is if you are literally trying to make a hex map of the whole world Mystara-style. OTOH, sketch means sketch. You can just doodle up something to show relative kingdoms and such. Right? I dig the look of your journal.

Thanks! This is the highest level of detail I’ve ever used for a “world map”, much to my players’ chagrin, haha. I used Boswer’s Castle from Super Mario World as a reference. Practical and done is so much more useful than pretty.