Our summer series continues with Week 3 of Ray Otus’s work book, The Gygax 75 Challenge. This week covers “The Dungeon,” so designing content for an adventure in your new campaign world.

The challenge is based on an old article by Gary Gygax about how to create a setting and get it ready for actual play with your home group in roughly 5 steps. This thread is for posting notebook photos, text in bullet points, links to markdown, etc. The informal accountability group on the NSR Discord server started the process on June 1st, 2022, so Week 3 covers progress from roughly June 15 - June 22.

This week was pretty difficult as I’ve never actually designed a dungeon before, but I had fun with it.

The Ziggurat of Zamor

A jet-black pyramid rises ominously out of the scrubland.

11 Monsters: Surgical drones stalk the halls of the main floor, deranged by hundreds of years of isolation. Cleaning bots follow behind, intent on “decontamination”. The second floor is patrolled by crimson and pale oozes consuming psi-rats and giant centipedes that have worked their way in to feed on the nutrient rich paste produces here. A central pool houses massive electric eels. A krynth stalks the second and third levels. On the third level a mind-wraith waits imprisoned in the Casket of the Ancients. Four Tech-thralls wait inactive to do the wraiths bidding. Massive beetles consume the fungi overrunning the third level and cordyceps infested humanoids wander aimlessly.

6 features: A massive organ processor sits in one of the rooms on the first floor. Drones will attempt to subdue PC’s and bring them for harvesting. Broken tubing pumps anesthesic gas into one of the hallways. Massive vats of boiling nutrient paste cover a large swath of the floor of the second level. Narrow walkways provide a way across. In the pool lies a mysterious pool of liquid silver that seems to beckon to the players. The Casket of the Ancients (a supercomputer) occupies the central room of the third floor. One of the doors out of this room is sealed with a strange, mirror like screen.

3 Wondrous Items: A Blade of Division is embedded in the wall of the processing room. An Amulet of Wraith Binding lies behind the mirror door. The Krynth has a Living Whip wrapped tight around it’s throat. 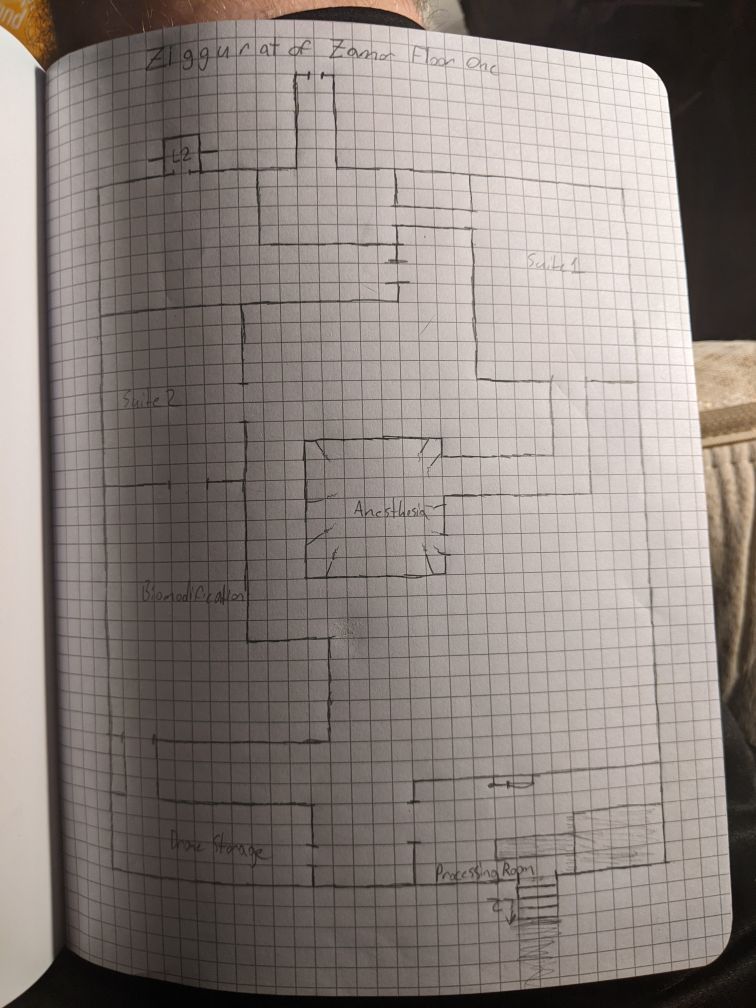 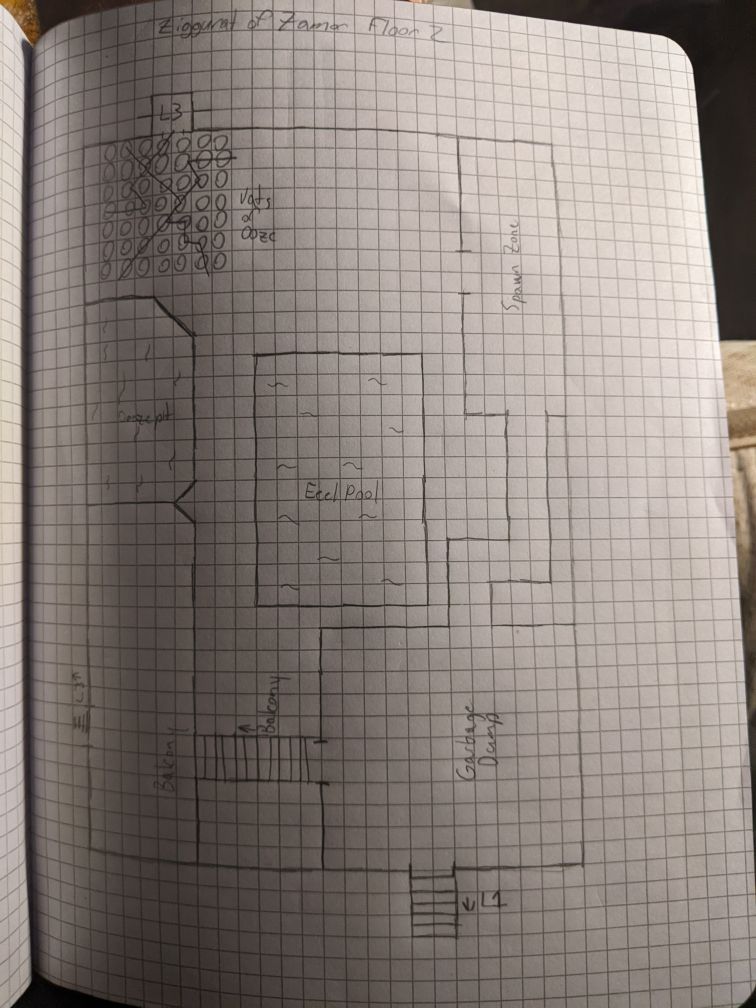 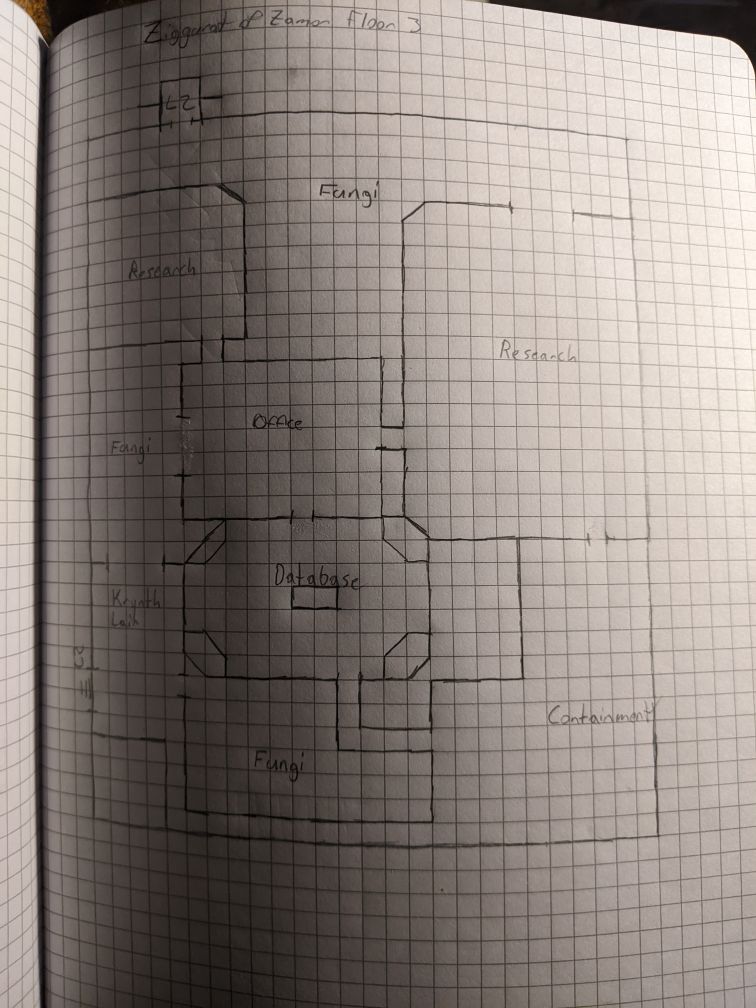 Week 3 was weird for me. I got a lot done but I wouldn’t say I’m finished. I kind of went down a rabbit hole and made it harder than it needed to be. But even so, I only spent maybe 6 hours on it. Anyway, here are a few screenshots of what I’m up to in Obsidian. I also talk about it on my podcast.

I basically finished a level, plus made up the monsters, treasures, etc. for the other levels.

330 Designing a Dungeon in a Zettelkasten by Plundergrounds 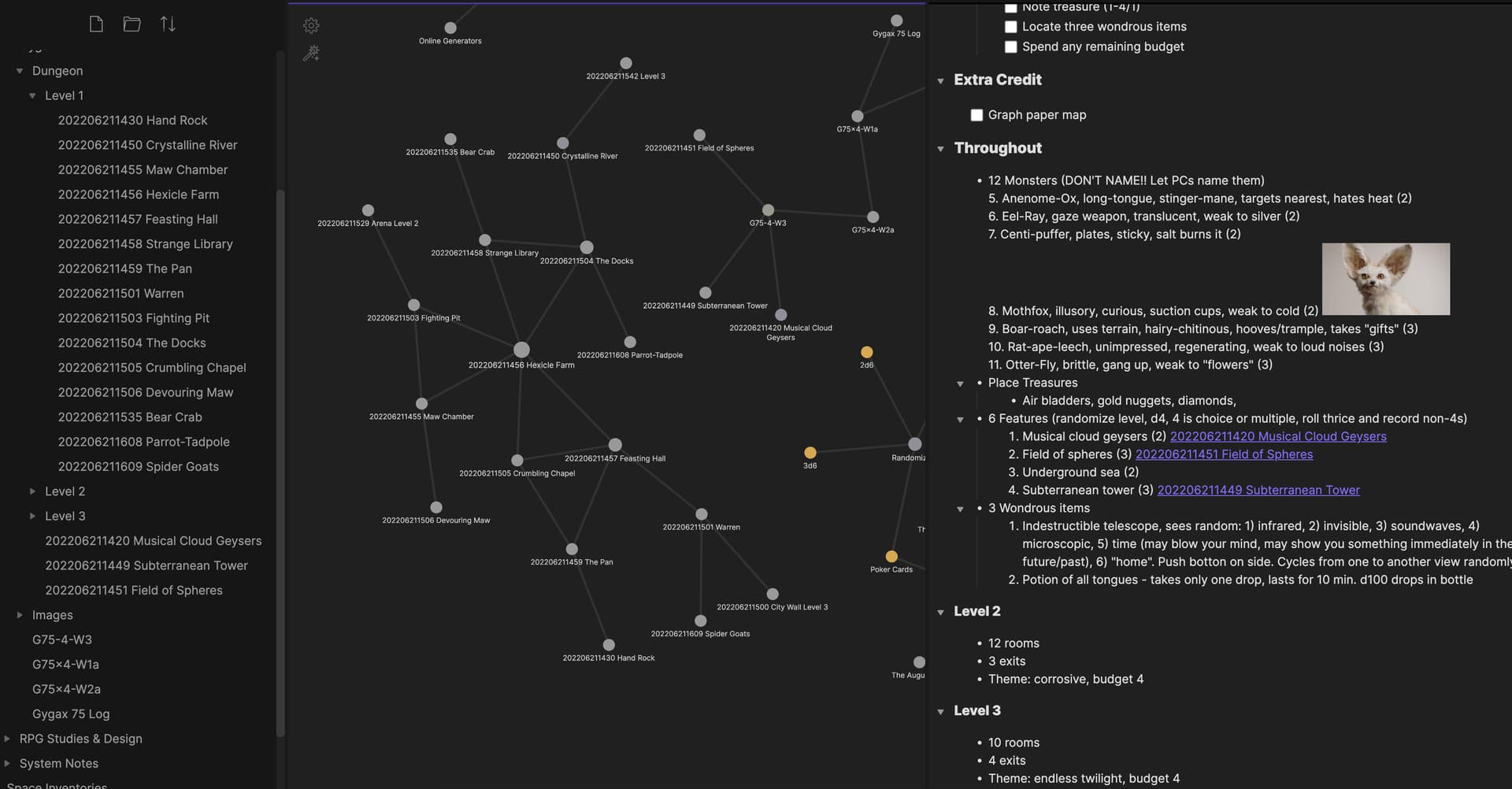 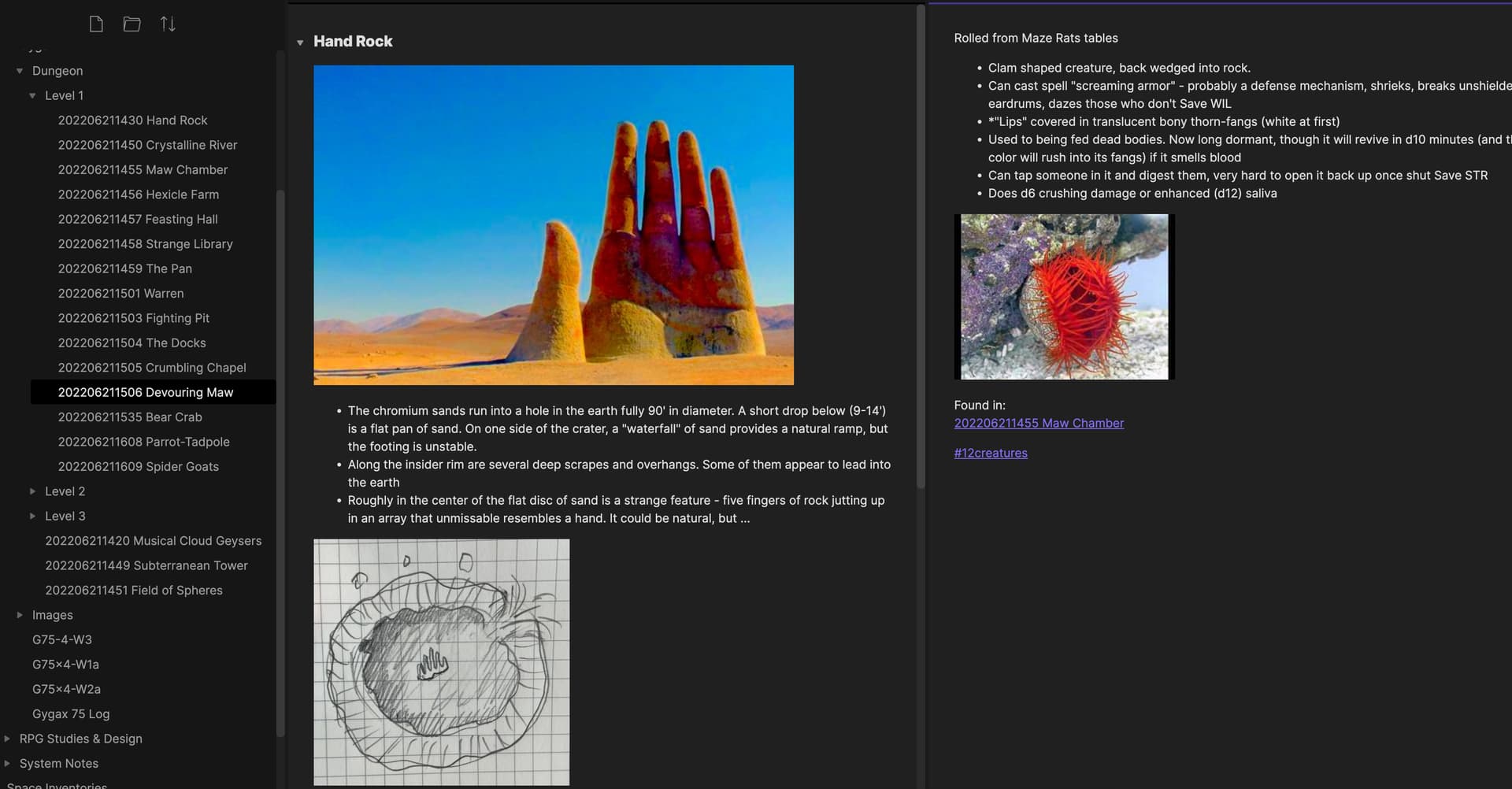 I completed this week a month ago, during the June challenge, but I drew this flowchart dungeon diagram in pencil on a sheet of paper and it wasn’t coming out in any scans or photos. Plus I wanted to clean up the image a bit and digitize it so I waited to post my update for this week here until I had done so… a month after the fact. Better late than never! 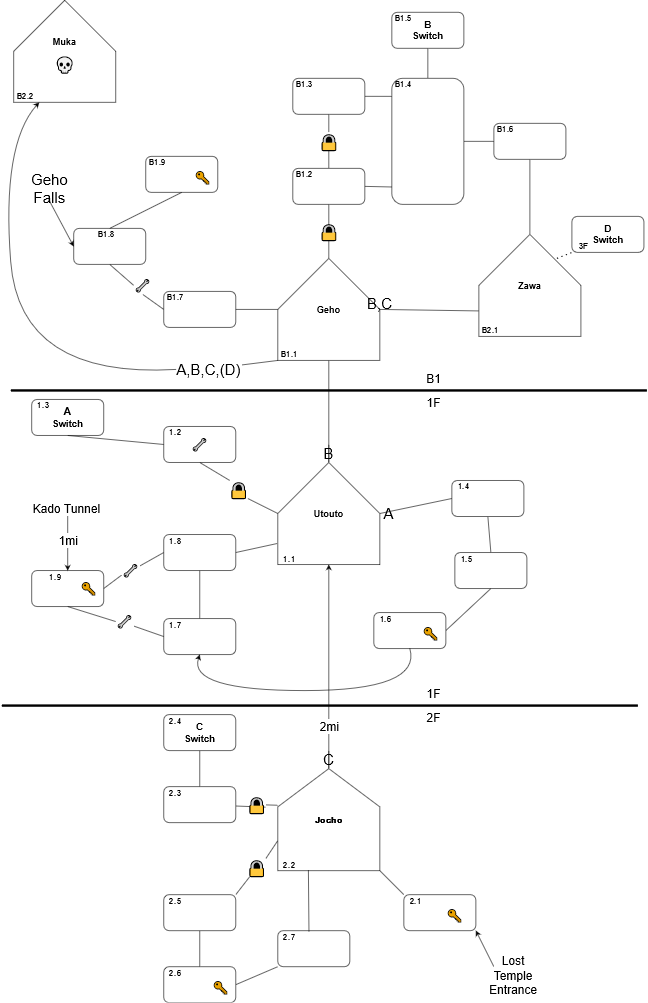 A scorching soot-choked air bellows from an ancient threshold at the mouth of Boh-n Jocho.

Underneath and interconnecting the Five Brothers volcanoes is a massive cathedral built out of the skeletons of long-extinct leviathans. Some believe this location to be the site of all the world’s power, the furnace of the Goddesses used to forge creation. The temple’s origins are older than any known civilization.

I’d like to revisit the concepts I started here, but I’ll probably wait quite a while to do so. I may or may not actually update this post when that happens.